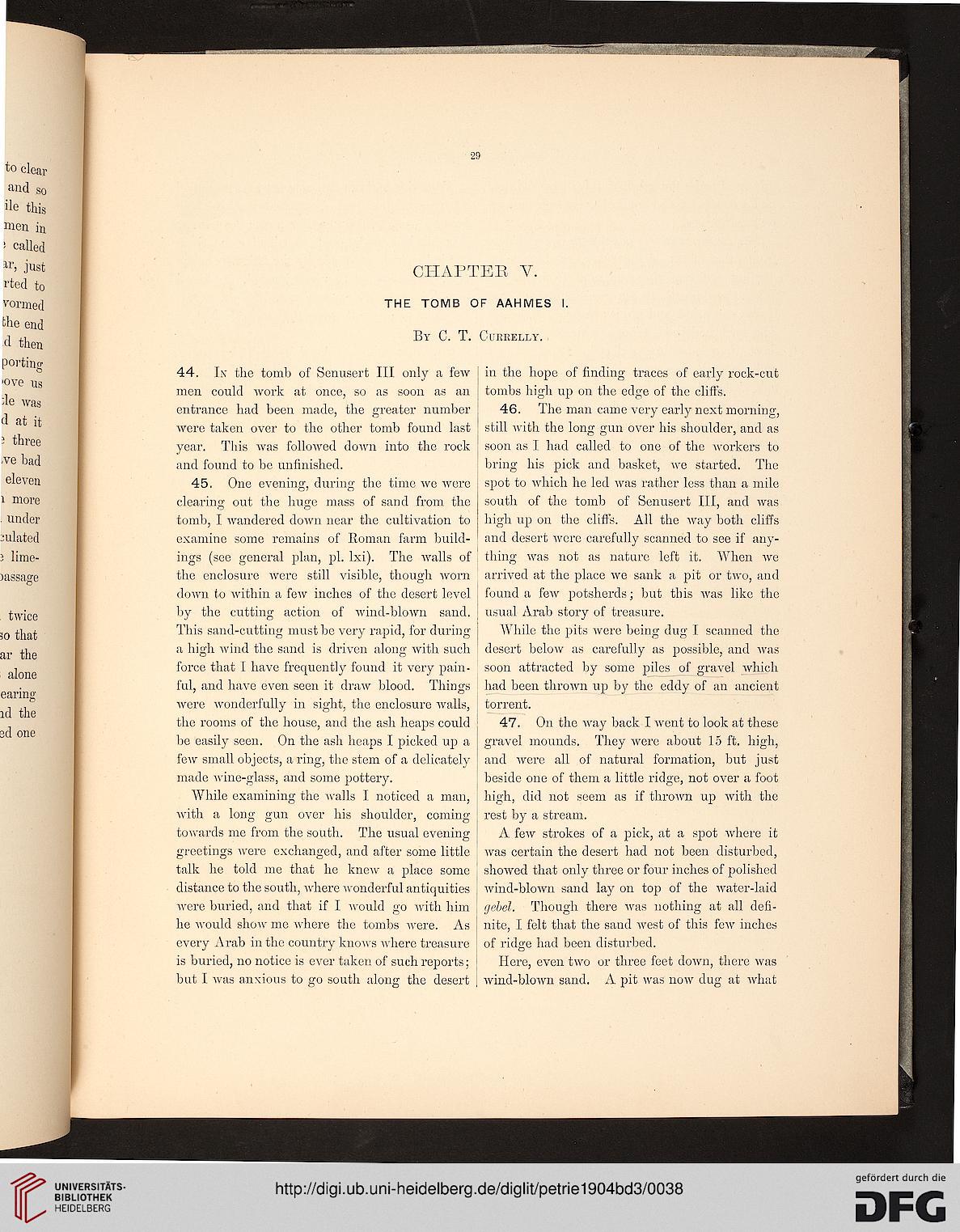 44. Ik the tomb of Senusert III only a few
men could work at once, so as soon as an
entrance had been made, the greater number
were taken over to the other tomb found last
year. This was followed doAvn into the rock
and found to be unfinished.

45. One evening, during the time we were
clearing out the huge mass of sand from the
tomb, I wandered down near the cultivation to
examine some remains of Roman farm build-
ings (see general plan, pi. lxi). The walls of
the enclosure were still visible, though worn
down to within a few inches of the desert level
by the cutting action of wind-blown sand,
This sand-cutting must be very rapid, for during
a high wind the sand is driven along with such
force that I have frequently found it very pain-
ful, and have even seen it draw blood. Things
were wonderfully in sight, the enclosure walls,
the rooms of the house, and the ash heaps could
be easily seen. On the ash heaps I picked up a
few small objects, a ring, the stem of a delicately
made wine-glass, and some pottery.

While examining the walls I noticed a man,
Avith a long gun over his shoulder, coming
towards me from the south. The usual evening
greetings were exchanged, and after some little
talk he told me that he knew a place some
distance to the south, where wonderful antiquities
were buried, and that if I would go with him
he would show me where the tombs were. As
every Arab in the country knows where treasure
is buried, no notice is ever taken of such reports;
but I was anxious to go south along the desert

in the hope of finding traces of early rock-cut
tombs high up on the edge of the cliffs.

46. The man came very early next morning,
still with the long gun over his shoulder, and as
soon as I had called to one of the workers to
bring his pick and basket, we started. The
spot to which he led was rather less than a mile
south of the tomb of Senusert III, and was
high up on the cliffs. All the way both cliffs
and desert were carefully scanned to see if any-
thing was not as nature left it. When Ave
arrived at the place Ave sank a pit or tAvo, and
found a feAV potsherds; but this Avas like the
usual Arab story of treasure.

While the pits Avere being dug I scanned the
desert beloAv as carefully as possible, and Avas
soon attracted by some piles of gravel Avhich
had been throAvn up by the eddy of an ancient
torrent.

47. On the Avay back I Avent to look at these
gravel mounds. They Avere about 15 ft. high,
and Avere all of natural formation, but just
beside one of them a little ridge, not over a foot
high, did not seem as if throAvn up Avith the
rest by a stream.

A feAV strokes of a pick, at a spot Avhere it
Avas certain the desert had not been disturbed,
shoAved that only three or four inches of polished
Avind-bloAvn sand lay on top of the Avater-laid
gebel. Though there Avas nothing at all defi-
nite, I felt that the sand Avest of this feAV inches
of ridge had been disturbed.