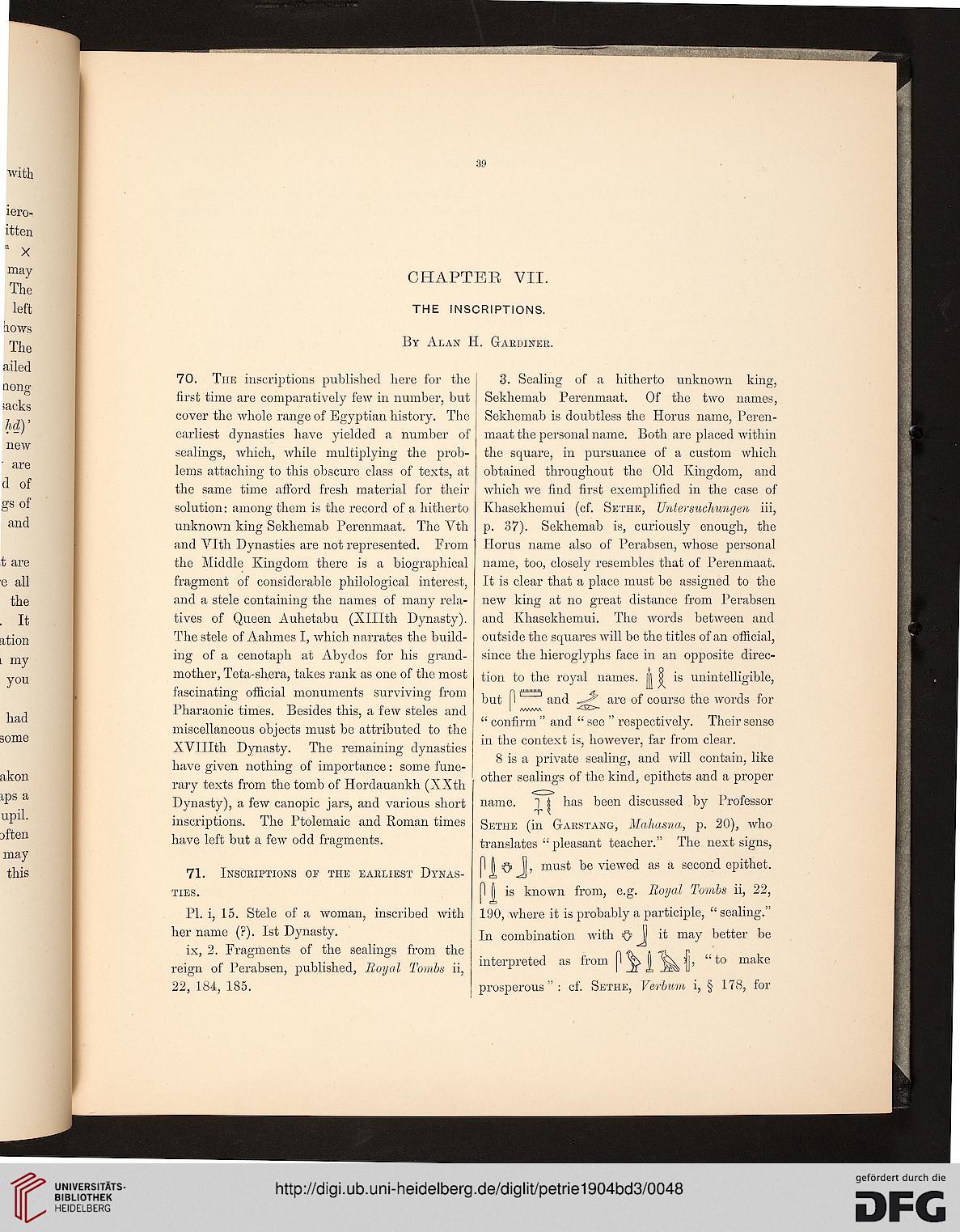 70. The inscriptions published here for the
first time are comparatively few in number, but
cover the whole range of Egyptian history. The
earliest dynasties have yielded a number of
sealings, which, while multiplying the prob-
lems attaching to this obscure class of texts, at
the same time afford fresh material for their
solution: among them is the record of a hitherto
unknown king Sekhemab Perenmaat. The Vth
and Vlth Dynasties are not represented. From
the Middle Kingdom there is a biographical
fragment of considerable philological interest,
and a stele containing the names of many rela-
tives of Queen Auhetabu (Xlllth Dynasty).
The stele of Aahmes I, which narrates the build-
ing of a cenotaph at Abydos for his grand-
mother, Teta-shera, takes rank as one of the most
fascinating official monuments surviving from
Pharaonic times. Besides this, a few steles and
miscellaneous objects must be attributed to the
XVIIIth Dynasty. The remaining dynasties
have given nothing of importance: some fune-
rary texts from the tomb of Hordauankh (XXth
Dynasty), a few canopic jars, and various short
inscriptions. The Ptolemaic and Roman times
have left but a few odd fragments.

71. Inscriptions of the earliest Dynas-
ties.

3. Sealing of a hitherto unknown king,
Sekhemab Perenmaat. Of the two names,
Sekhemab is doubtless the Horus name, Peren-
maat the personal name. Both are placed within
the square, in pursuance of a custom which
obtained throughout the Old Kingdom, and
which we find first exemplified in the case of
Khasekhemui (cf. Sethe, Untersuchungen iii,
p. 37). Sekhemab is, curiously enough, the
Horus name also of Perabsen, whose personal
name, too, closely resembles that of Perenmaat.
It is clear that a place must be assigned to the
new king at no great distance from Perabsen
and Khasekhemui. The words between and
outside the squares will be the titles of an official,
since the hieroglyphs face in an opposite direc-
tion to the royal names, fl | is unintelligible,
but I and ~J^ are of course the words for

11 confirm " and " see " respectively. Their sense
in the context is, however, far from clear.

8 is a private sealing, and will contain, like
other sealings of the kind, epithets and a proper

Sethe (in Garstang, Mahasna, p. 20), who
translates " pleasant teacher." The next signs,