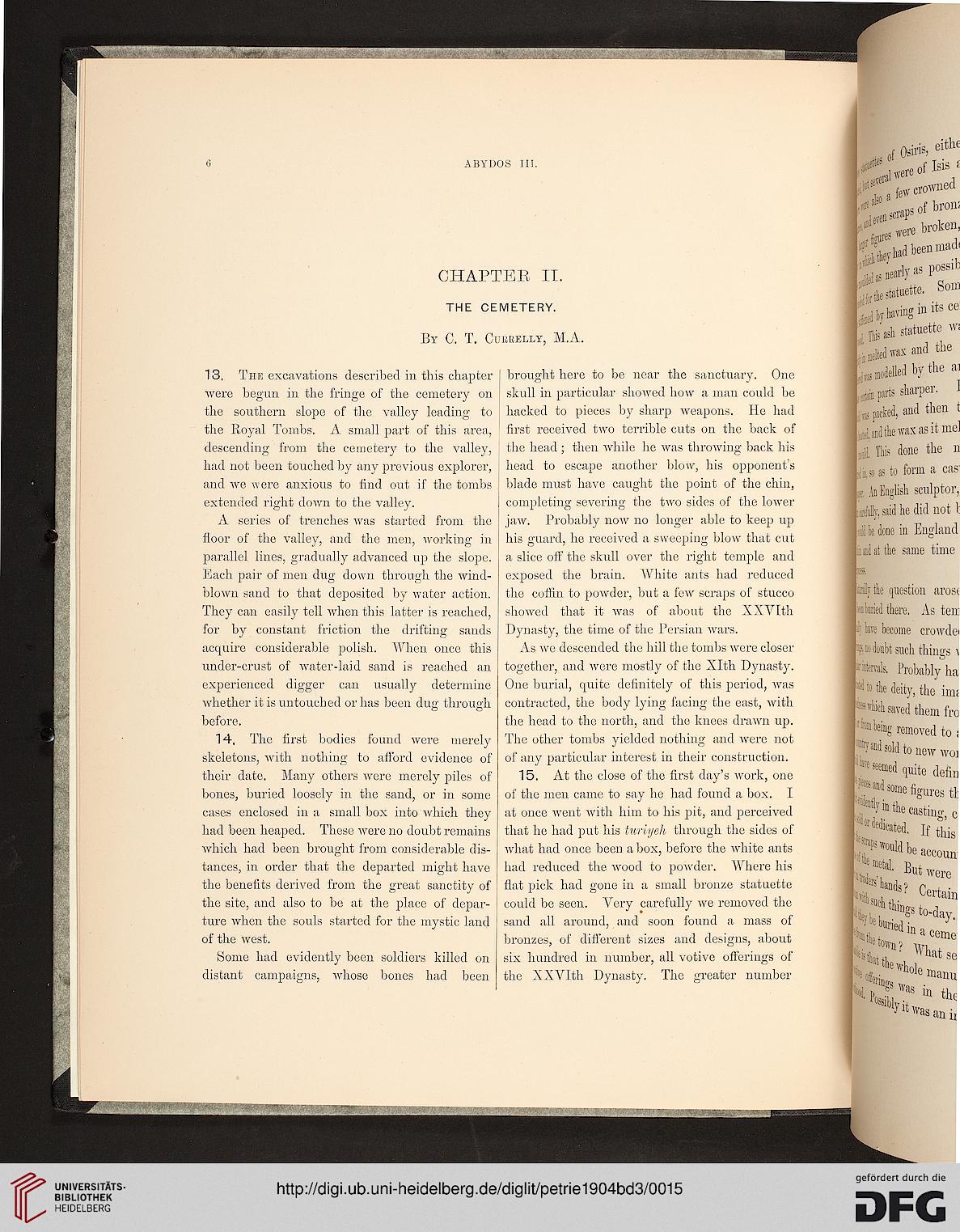 13. The excavations described in this chapter
were begun in the fringe of the cemetery on
the southern slope of the valley leading to
the Royal Tombs. A small part of this area,
descending from the cemetery to the valley,
had not been touched by any previous explorer,
and we were anxious to find out if the tombs
extended right down to the valley.

A series of trenches was started from the
floor of the valley, and the men, working in
parallel lines, gradually advanced up the slope.
Each pair of men dug down through the wind-
blown sand to that deposited by water action.
They can easily tell when this latter is reached,
for by constant friction the drifting sands
acquire considerable polish. When once this
under-crust of water-laid sand is reached an
experienced digger can usually determine
Avhether it is untouched or has been due: through
before.

14, The first bodies found were merely
skeletons, Avith nothing to afford evidence of
their date. Many others were merely piles of
bones, buried loosely in the sand, or in some
cases enclosed in a small box into which they
had been heaped. These were no doubt remains
which had been brought from considerable dis-
tances, in order that the departed might have
the benefits derived from the great sanctity of
the site, and also to be at the place of depar-
ture when the souls started for the mystic land
of the west.

Some had evidently been soldiers killed on
distant campaigns, whose bones had been

brought here to be near the sanctuary. One
skull in particular showed how a man could be
hacked to pieces by sharp weapons. He had
first received two terrible cuts on the back of
the head ; then while he was throwing back his
head to escape another blow, his opponent's
blade must have caught the point of the chin,
completing severing the two sides of the lower
jaw. Probably now no longer able to keep up
his guard, he received a sweeping blow that cut
a slice off the skull over the right temple and
exposed the brain. White ants had reduced
the coffin to powder, but a few scraps of stucco
showed that it was of about the XXVIth
Dynasty, the time of the Persian Avars.

As Ave descended the hill the tombs were closer
together, and were mostly of the Xlth Dynasty.
One burial, quite definitely of this period, Avas
contracted, the body lying facing the east, Avith
the head to the north, and the knees drawn up.
The other tombs yielded nothing and were not
of any particular interest in their construction.

15. At the close of the first day's work, one
of the men came to say he had found a box. I
at once went with him to his pit, and perceived
that he had put his turiyeh through the sides of
what had once been a box, before the Avhite ants
had reduced the avooc! to poAvder. Where his
fiat pick had gone in a small bronze statuette
could be seen. Very carefully Ave removed the
sand all around, and soon found a mass of
bronzes, of different sizes and designs, about
six hundred in number, all votive offerings of
the XXVIth Dynasty. The greater number

fc statuette. Som
in its ce

This ash statuette wj
pelted wax and the

modelled by the ai

Jias packed, and then t

This done the n

|SOas to form a cas'

folly, said he did not I

I k done in England

and at the same time

ie question arost
skied there, As ten:
ve become crowdei
doubt such thing's a
•rvals. Probably ha
W to the deity, the inn
fo saved them fro
»eing removed to $
!1dsoldtonewAv0]
^ quite defin