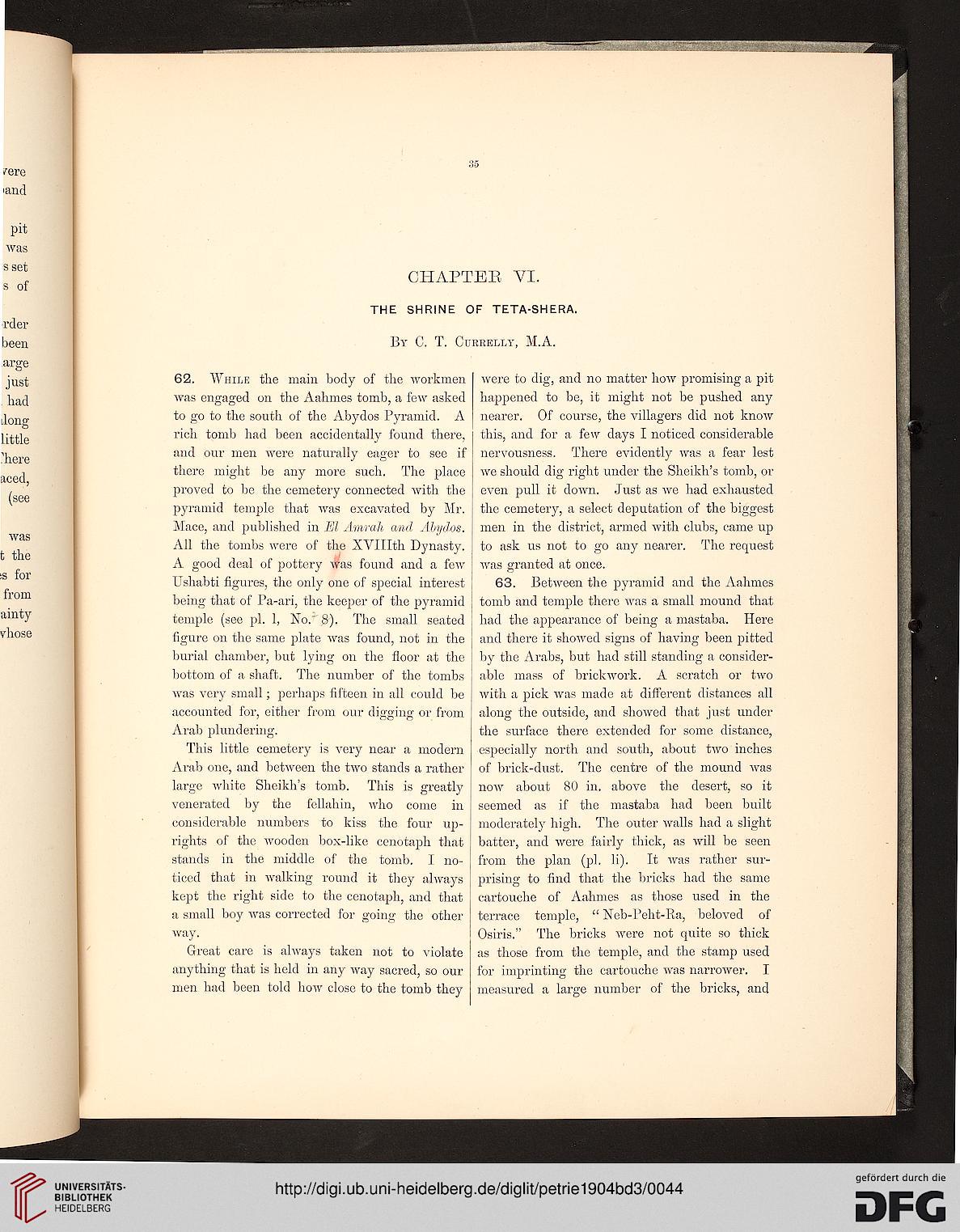 62. While the main body of the workmen
was engaged on the Aahmes tomb, a few asked
to go to the south of the Abydos Pyramid. A
rich tomb had been accidentally found there,
and our men were naturally eager to see if
there might be any more such. The place
proved to be the cemetery connected with the
pyramid temple that was excavated by Mr.
Mace, and published in M Amrah and Abydos.
All the tombs were of the XVIIIth Dynasty.
A good deal of pottery was found and a few
Ushabti figures, the only one of special interest
being that of Pa-ari, the keeper of the pyramid
temple (see pi. 1, No.' 8). The small seated
figure on the same plate was found, not in the
burial chamber, but lying on the floor at the
bottom of a shaft. The number of the tombs
was very small; perhaps fifteen in all could be
accounted for, either from our digging or from
Arab plundering.

This little cemetery is very near a modern
Arab one, and between the two stands a rather
large white Sheikh's tomb. This is greatly
venerated by the fellahin, who come in
considerable numbers to kiss the four up-
rights of the wooden box-like cenotaph that
stands in the middle of the tomb. I no-
ticed that in walking round it they always
kept the right side to the cenotaph, and that
a small boy was corrected for going the other
way.

Great care is always taken not to violate
anything that is held in any way sacred, so our
men had been told how close to the tomb they

were to dig, and no matter how promising a pit
happened to be, it might not be pushed any
nearer. Of course, the villagers did not know
this, and for a few days I noticed considerable
nervousness. There evidently was a fear lest
we should dig right under the Sheikh's tomb, or
even pull it down. Just as we had exhausted
the cemetery, a select deputation of the biggest
men in the district, armed with clubs, came up
to ask us not to go any nearer. The request
was granted at once.

63. Between the pyramid and the Aahmes
tomb and temple there was a small mound that
had the appearance of being a mastaba. Here
and there it showed signs of having been pitted
by the Arabs, but had still standing a consider-
able mass of brickwork. A scratch or two
with a pick was made at different distances all
along the outside, and shoAved that just under
the surface there extended for some distance,
especially north and south, about two inches
of brick-dust. The centre of the mound was
now about 80 in. above the desert, so it
seemed as if the mastaba had been built
moderately high. The outer walls had a slight
batter, and were fairly thick, as will be seen
from the plan (pi. li). It was rather sur-
prising to find that the bricks had the same
cartouche of Aahmes as those used in the
terrace temple, " Neb-Peht-Ra, beloved of
Osiris." The bricks were not quite so thick
as those from the temple, and the stamp used
for imprinting the cartouche was narrower. I
measured a large number of the bricks, and