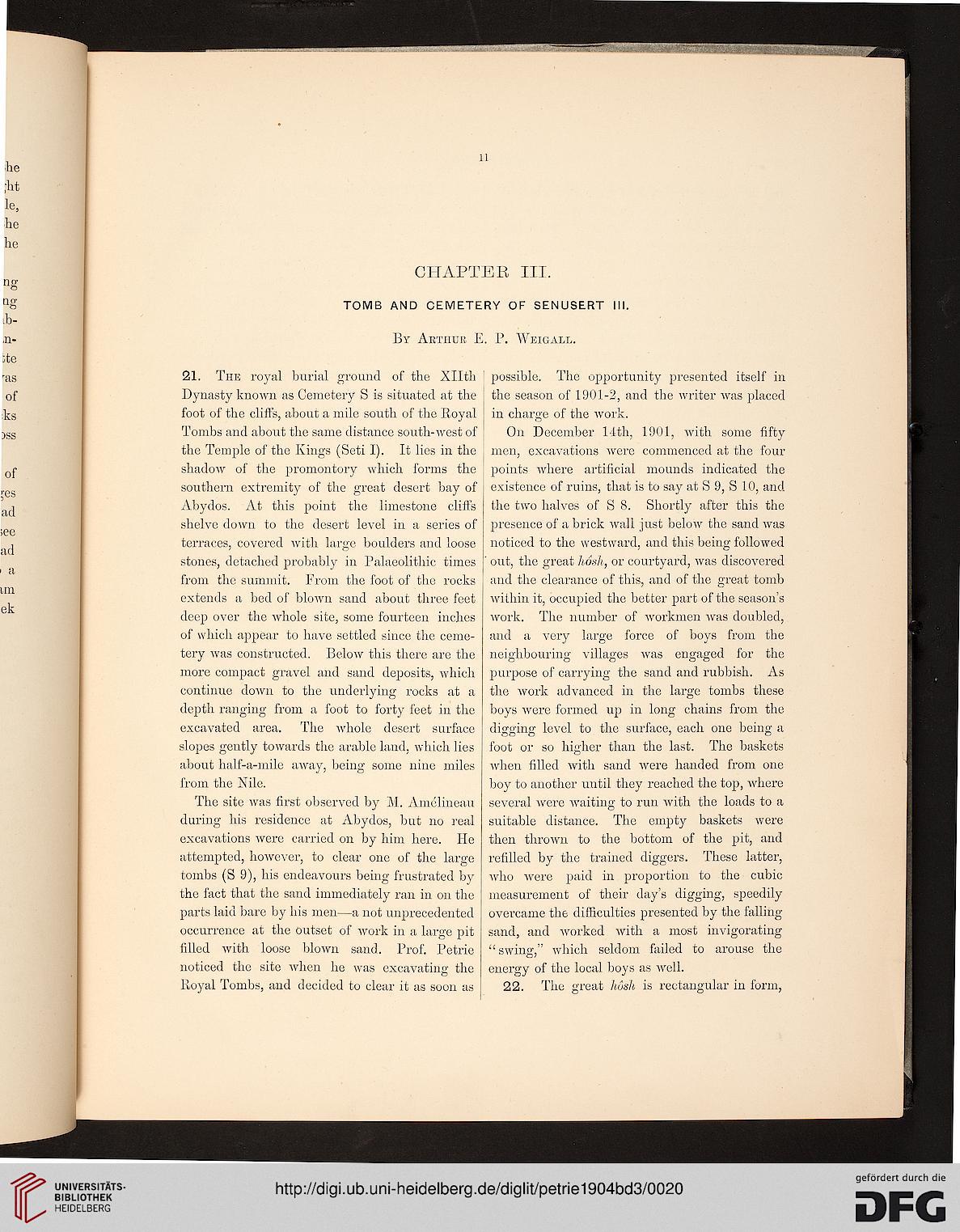 TOMB AND CEMETERY OF SENUSERT III.

21. The royal burial ground of the XIIth
Dynasty known as Cemetery S is situated at the
foot of the cliffs, about a mile south of the Eoyal
Tombs and about the same distance south-west of
the Temple of the Kings (Seti I). It lies in the
shadow of the promontory which forms the
southern extremity of the great desert bay of
Abydos. At this point the limestone cliffs
shelve down to the desert level in a series of
terraces, covered Avith large boulders and loose
stones, detached probably in Palaeolithic times
from the summit. From the foot of the rocks
extends a bed of blown sand about three feet
deep over the whole site, some fourteen inches
of which appear to have settled since the ceme-
tery was constructed. Below this there are the
more compact gravel and sand deposits, which
continue down to the underlying rocks at a
depth ranging from a foot to forty feet in the
excavated area. The whole desert surface
slopes gently towards the arable land, which lies
about half-a-mile away, being some nine miles
from the Nile.

The site was first observed by M. Amelineau
during his residence at Abydos, but no real
excavations were carried on by him here. He
attempted, however, to clear one of the large
tombs (S 9), his endeavours being frustrated by
the fact that the sand immediately ran in on the
parts laid bare by his men—a not unprecedented
occurrence at the outset of work in a large pit
filled with loose blown sand. Prof. Petrie
noticed the site when he was excavating; the
Royal Tombs, and decided to clear it as soon as

possible. The opportunity presented itself in
the season of 1901-2, and the writer was placed
in charge of the work.

On December 14th, 1901, with some fifty
men, excavations were commenced at the four
points where artificial mounds indicated the
existence of ruins, that is to say at S 9, S 10, and
the two halves of S 8. Shortly after this the
presence of a brick wall just below the sand was
noticed to the westward, and this being followed
' out, the great hdsh, or courtyard, was discovered
and the clearance of this, and of the great tomb
within it, occupied the better part of the season's
work. The number of workmen Avas doubled,
and a very large force of boys from the
neighbouring villages was engaged for the
purpose of carrying the sand and rubbish. As
the work advanced in the large tombs these
boys were formed up in long chains from the
digging level to the surface, each one being a
foot or so higher than the last. The baskets
Avhen filled with sand Avere handed from one
boy to another until they reached the top, Avhere
several Avere waiting to run Avith the loads to a
suitable distance. The empty baskets Avere
then throAvn to the bottom of the pit, and
refilled by the trained diggers. These latter,
Avho were paid in proportion to the cubic
measurement of their day's digging, speedily
overcame the difficulties presented by the falling-
sand, and Avorked Avith a most invigorating
" swing," which seldom failed to arouse the
energy of the local boys as Avell.

22. The great hdsh is rectangular in form,