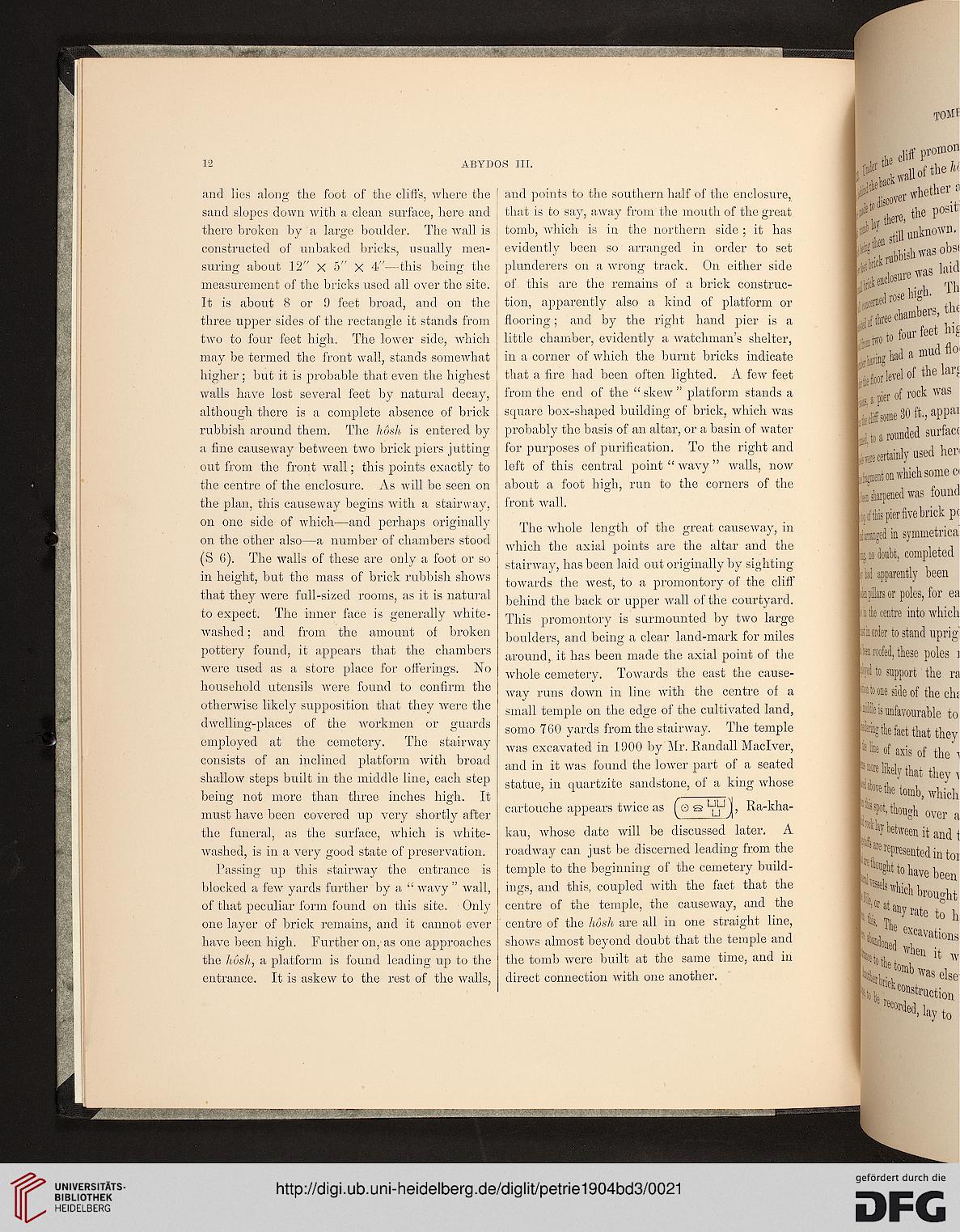 and lies along the foot of the cliffs, where the
sand slopes down with a clean surface, here and
there broken by a large boulder. The wall is
constructed of unbaked bricks, usually mea-
suring about 12" X 5" X 4"—this being the
measurement of the bricks used all over the site.
It is about 8 or 9 feet broad, and on the
three upper sides of the rectangle it stands from
two to four feet high. The lower side, which
may be termed the front wall, stands somewhat
higher ; but it is probable that even the highest
walls have lost several feet by natural decay,
although there is a complete absence of brick
rubbish around them. The hosh is entered by
a fine causeway between two brick piers jutting
out from the front wall; this points exactly to
the centre of the enclosure. As will be seen on
the plan, this causeway begins with a stairway,
on one side of which—and perhaps originally
on the other also—a number of chambers stood
(S 6). The walls of these are only a foot or so
in height, but the mass of brick rubbish shows
that they were full-sized rooms, as it is natural
to expect. The inner face is generally white-
washed ; and from the amount of broken
pottery found, it appears that the chambers
were used as a store place for offerings. No
household utensils were found to confirm the
otherwise likely supposition that they were the
dwelling-places of the workmen or guards
employed at the cemetery. The stairway
consists of an inclined platform with broad
shallow steps built in the middle line, each step
being not more than three inches high. It
must have been covered up very shortly after
the funeral, as the surface, which is white-
washed, is in a very good state of preservation.
Passing up this stairway the entrance is
blocked a few yards further by a " wavy " wall,
of that peculiar form found on this site. Only
one layer of brick remains, and it cannot ever
have been high. Further on, as one approaches
the Iwsli, a platform is found leading up to the
entrance. It is askew to the rest of the Avails,

and points to the southern half of the enclosure,
that is to say, away from the mouth of the great
tomb, which is in the northern side ; it has
evidently been so arranged in order to set
plunderers on a Avrong track. On either side
of this are the remains of a brick construc-
tion, apparently also a kind of platform or
flooring; and by the right hand pier is a
little chamber, evidently a Avatchman's shelter,
in a corner of Avhich the burnt bricks indicate
that a fire had been often lighted. A feAv feet
from the end of the " skew " platform stands a
square box-shaped building of brick, Avhich Avas
probably the basis of an altar, or a basin of Avater
for purposes of purification. To the right and
left of this central point " wavy" Avails, iioav
about a foot high, run to the corners of the
front Avail.

The Avhole length of the great causeAvay, in
Avhich the axial points are the altar and the
stairAvay, has been laid out originally by sighting
toAvards the Avest, to a promontory of the cliff
behind the back or upper Avail of the courtyard.
This promontory is surmounted by two large
boulders, and being a clear land-mark for miles
around, it has been made the axial point of the
Avhole cemetery. ToAvards the east the cause-
Avay runs doAvn in line Avith the centre of a
small temple on the edge of the cultivated land,
somo 760 yards from the stairway. The temple
was excavated in 1900 by Mr. Kandall Maclver,
and in it Avas found the loAver part of a seated
statue, in quartzite sandstone, of a king AA'hose

kau, Avhose date will be discussed later. A
roadAvay can just be discerned leading from the
temple to the beginning of the cemetery build-
ings, and this, coupled with the fact that the
centre of the temple, the causeAvay, and the
centre of the hdsh are all in one straight line,
shows almost beyond doubt that the temple and
the tomb were built at the same time, and in
direct connection Avith one another.

^r level of the Ian

a pier of rock was

ti pilars or poles, for ea

to roofed, these poles i

■e side of the cru

% the fact that they

«e likely that they ,

*vet^ tomb, Avhich
luM though over a
*¥ between it and t

^^ntediutox
f to have been