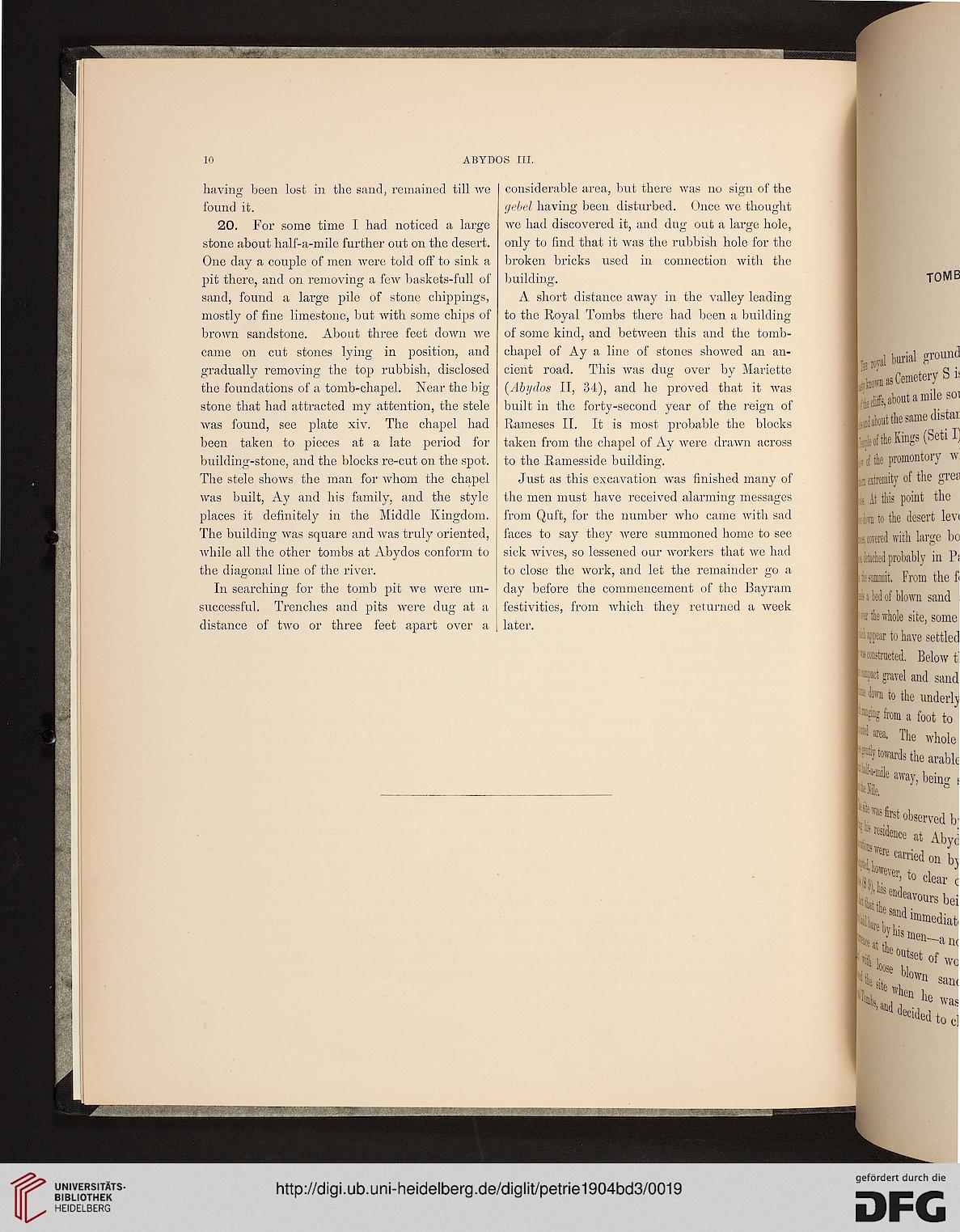 having been lost in the sand, remained till we
found it.

20. For some time I had noticed a large
stone about half-a-mile further out on the desert.
One day a couple of men were told off to sink a
pit there, and on removing a feAV baskets-full of
sand, found a large pile of stone chippings,
mostly of fine limestone, but with some chips of
brown sandstone. About three feet down we
came on cut stones lying in position, and
gradually removing the top rubbish, disclosed
the foundations of a tomb-chapel. Near the big
stone that had attracted my attention, the stele
was found, see plate xiv. The chapel had
been taken to pieces at a late period for
building-stone, and the blocks re-cut on the spot.
The stele shows the man for whom the chapel
was built, Ay and his family, and the style
places it definitely in the Middle Kingdom.
The building was square and Avas truly oriented,
while all the other tombs at Abydos conform to
the diagonal line of the river.

In searching for the tomb pit we were un-
successful. Trenches and pits were dug at a
distance of two or three feet apart over a

considerable area, but there was no sign of the
gebel having been disturbed. Once Ave thought
Ave had discovered it, and dug out a large hole,
only to find that it was the rubbish hole for the
broken bricks used in connection Avith the
building.

A short distance away in the valley leading
to the Royal Tombs there had been a building
of some kind, and between this and the tomb-
chapel of Ay a line of stones shoAved an an-
cient road. This Avas dug over by Mariette
{Abydos II, 34), and he proved that it Avas
built in the forty-second year of the reign of
Rameses II. It is most probable the blocks
taken from the chapel of Ay Avere draAvn across
to the Ramesside building.

Just as this excavation Avas finished many of
the men must have received alarming messages
from Quft, for the number Avho came with sad
faces to say they Avere summoned home to see
sick wives, so lessened our workers that we had
to close the work, and let the remainder go a
day before the commencement of the Bay ram
festivities, from Avhich they returned a Aveek
later.

At this point the

m to the desert levi

le summit, From the f<

lis a bed of blown sand

r the whole site, some

* appear to have settled

rom a foot to