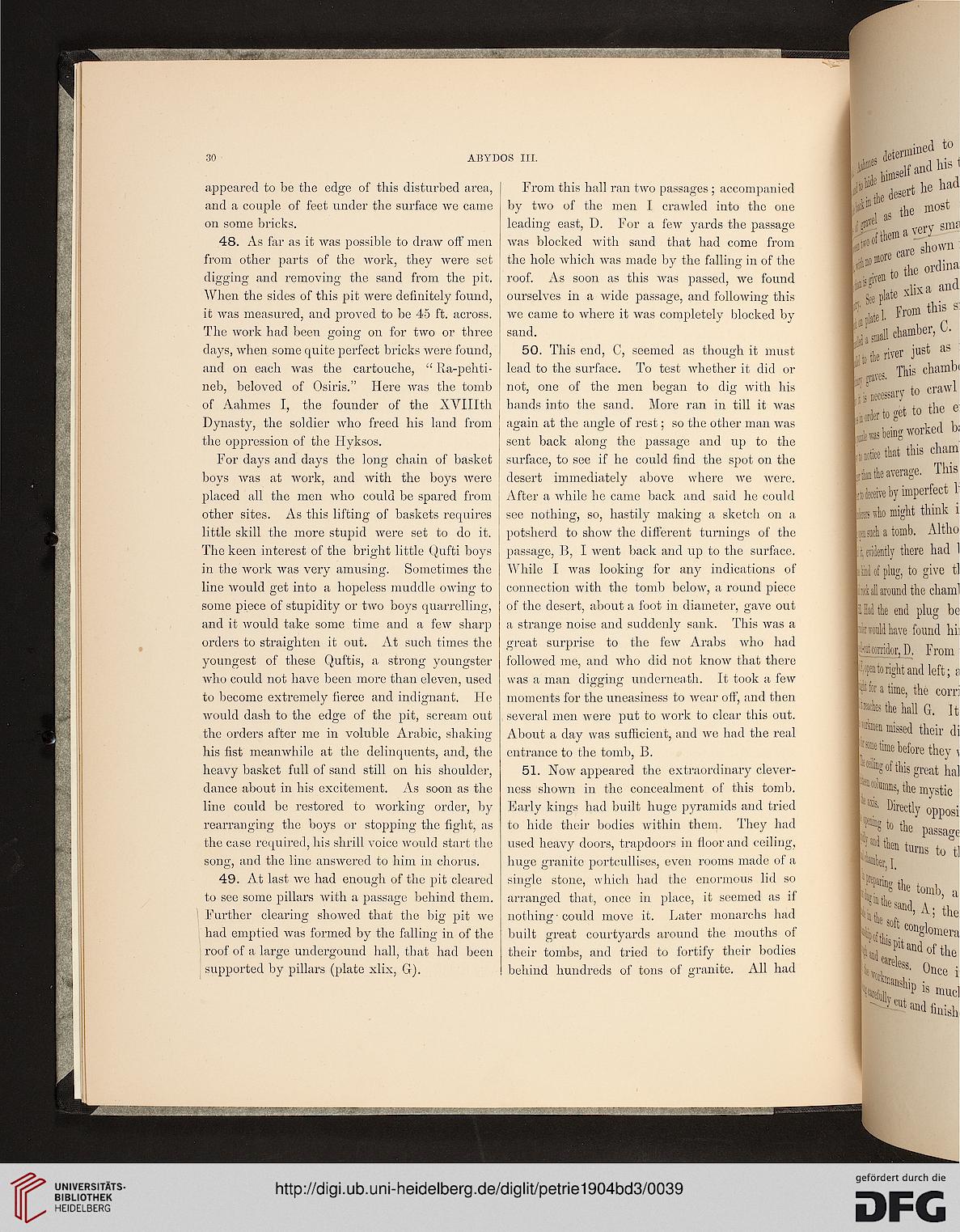 appeared to be the edge of this disturbed area,
and a couple of feet under the surface we came
on some bricks.

48. As far as it was possible to draw off men
from other parts of the work, they were set
digging and removing the sand from the pit.
When the sides of this pit were definitely found,
it was measured, and proved to be 45 ft. across.
The work had been going on for two or three
days, when some quite perfect bricks were found,
and on each was the cartouche, " Ra-pehti-
neb, beloved of Osiris." Here was the tomb
of Aahmes I, the founder of the XVIIIth
Dynasty, the soldier who freed his land from
the oppression of the Hyksos.

For days and days the long chain of basket
boys was at work, and with the boys were
placed all the men Avho could be spared from
other sites. As this lifting of baskets requires
little skill the more stupid were set to do it.
The keen interest of the bright little Qufti boys
in the work was very amusing. Sometimes the
line would get into a hopeless muddle owing to
some piece of stupidity or two boys quarrelling,
and it would take some time and a few sharp
orders to straighten it out. At such times the
youngest of these Quftis, a strong youngster
who could not have been more than eleven, used
to become extremely fierce and indignant. He
would dash to the edge of the pit, scream out
the orders after me in voluble Arabic, shaking
his fist meanwhile at the delinquents, and, the
heavy basket full of sand still on his shoulder,
dance about in his excitement. As soon as the
line could be restored to working order, by
rearranging the boys or stopping the fight, as
the case required, his shrill voice would start the
song, and the line answered to him in chorus.

49. At last we had enough of the pit cleared
to see some pillars with a passage behind them.
Further clearing showed that the big pit we
had emptied was formed by the falling in of the
roof of a large undergound hall, that had been
supported by pillars (plate xlix, G).

From this hall ran two passages ; accompanied
by two of the men I crawled into the one
leading east, D. For a few yards the passage
was blocked with sand that had come from
the hole which was made by the falling in of the
roof. As soon as this was passed, we found
ourselves in a wide passage, and following this
Ave came to where it was completely blocked by
sand.

50. This end, C, seemed as though it must
lead to the surface. To test whether it did or
not, one of the men began to dig with his
hands into the sand. More ran in till it was
again at the angle of rest; so the other man was
sent back along the passage and up to the
surface, to see if he could find the spot on the
desert immediately above where we were.
After a while he came back and said he could
see nothing, so, hastily making a sketch on a
potsherd to show the different turnings of the
passage, B, I went back and up to the surface.
While I was looking for any indications of
connection with the tomb below, a round piece
of the desert, about a foot in diameter, gave out
a strange noise and suddenly sank. This was a
great surprise to the few Arabs who had
followed me, and Avho did not know that there
was a man digging underneath. It took a few
moments for the uneasiness to wear off, and then
several men were put to work to clear this out.
About a day was sufficient, and Ave had the real
entrance to the tomb, B.

51. Now appeared the extraordinary clever-
ness shown in the concealment of this tomb.
Early kings had built huge pyramids and tried
to hide their bodies within them. They had
used heavy doors, trapdoors in floor and ceiling,
huge granite portcullises, even rooms made of a
single stone, which had the enormous lid so
arranged that, once in place, it seemed as if
nothing ■ could move it. Later monarchs had
built great courtyards around the mouths of
their tombs, and tried to fortify their bodies
behind hundreds of tons of granite. All had

ale was being worked bi

3 notice that this cham

the average. This
dokeive by imperfect r
irers who might think l
;jfflsuch a tomb. Altho
\ evidently there had 1
■M of plug, to give tl
luck all around the chaml
:' lad the end plug be
i would have found hii
M corridor, D. From ■
pnto right and left; s
P for a time, the corri

hall G. It
missed their di

is, the mystic
Directly opposi