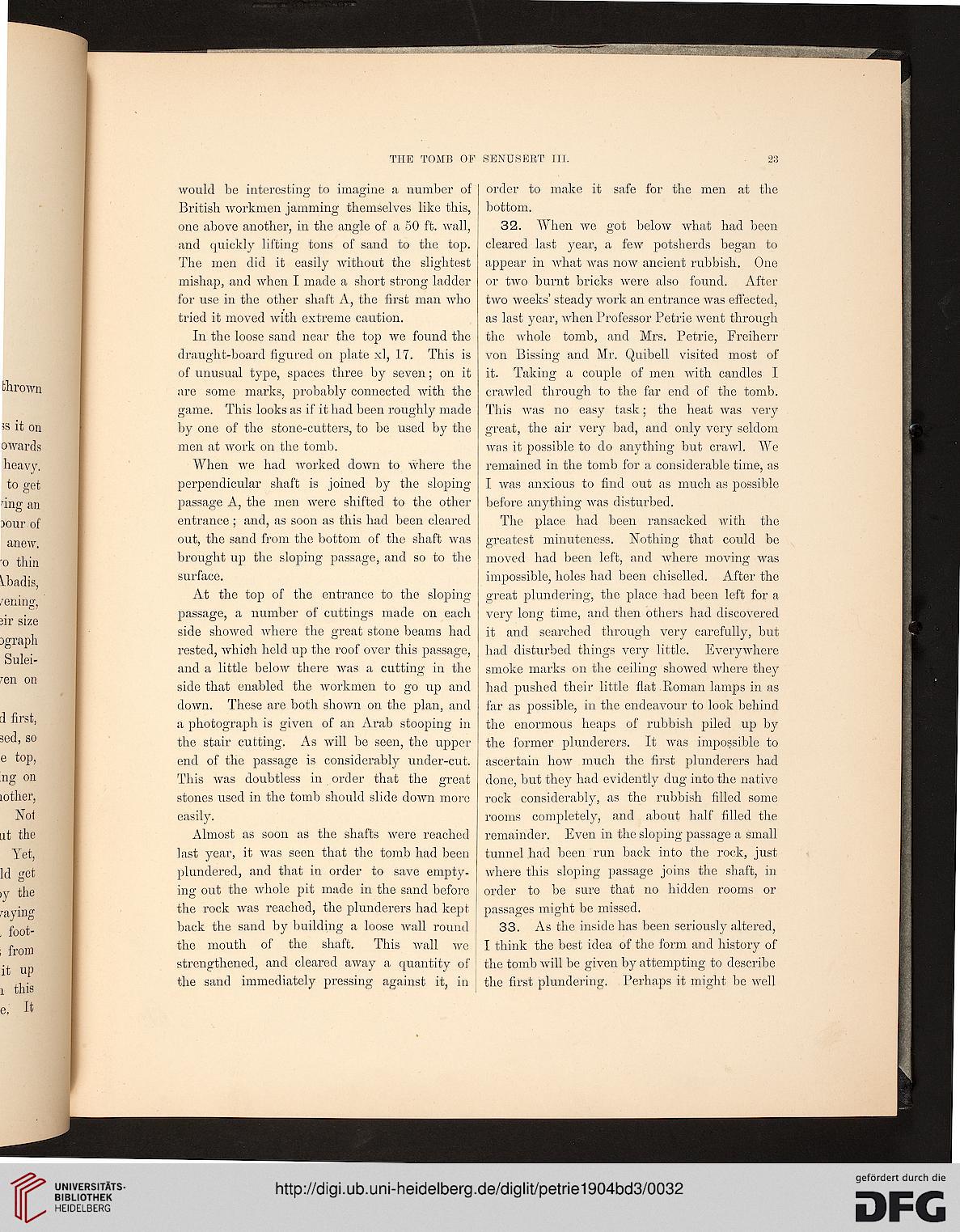 would be interesting to imagine a number of
British workmen jamming themselves like this,
one above another, in the angle of a 50 ft. wall,
and quickly lifting tons of sand to the top.
The men did it easily Avithout the slightest
mishap, and when I made a short strong ladder
for use in the other shaft A, the first man who
tried it moved with extreme caution.

In the loose sand near the top we found the
draught-board figured on plate xl, 17. This is
of unusual type, spaces three by seven; on it
are some marks, probably connected with the
game. This looks as if it had been roughly made
by one of the stone-cutters, to be used by the
men at work on the tomb.

When we had worked down to where the
perpendicular shaft is joined by the sloping
passage A, the men were shifted to the other
entrance ; and, as soon as this had been cleared
out, the sand from the bottom of the shaft was
brought up the sloping passage, and so to the
surface.

At the top of the entrance to the sloping-
passage, a number of cuttings made on each
side showed where the great stone beams had
rested, which held up the roof over this passage,
and a little below there was a cutting in the
side that enabled the workmen to go up and
down. These are both shown on the plan, and
a photograph is given of an Arab stooping in
the stair cutting. As will be seen, the upper
end of the passage is considerably under-cut.
This was doubtless in order that the great
stones used in the tomb should slide down more
easily.

Almost as soon as the shafts were reached
last year, it was seen that the tomb had been
plundered, and that in order to save empty-
ing out the whole pit made in the sand before
the rock was reached, the plunderers had kept
back the sand by building a loose wall round
the mouth of the shaft. This wall we
strengthened, and cleared away a quantity of
the sand immediately pressing against it, in

order to make it
bottom.

safe for the men at the

32. When we got below what had been
cleared last year, a few potsherds began to
appear in what was now ancient rubbish. One
or two burnt bricks were also found. After
two weeks' steady work an entrance was effected,
as last year, Avhen Professor Petrie went through
the whole tomb, and Mrs. Petrie, Freiherr
von Bissing and Mr. Quibell visited most of
it. Taking a couple of men with candles I
crawled through to the far end of the tomb.
This was no easy task; the heat was very
great, the air very bad, and only very seldom
was it possible to do anything but crawl. We
remained in the tomb for a considerable time, as
I was anxious to find out as much as possible
before anything was disturbed.

The place had been ransacked with the
greatest minuteness. Nothing that could be
moved had been left, and Avhere moving was
impossible, holes had been chiselled. After the
great plundering, the place had been left for a
very long time, and then others had discovered
it and searched through very carefully, but
had disturbed things very little. Everywhere
smoke marks on the ceiling showed where they
had pushed their little fiat Roman lamps in as
far as possible, in the endeaA^our to look behind
the enormous heaps of rubbish piled up by
the former plunderers. It Avas impossible to
ascertain Iioav much the first plunderers had
done, but they had evidently dug into the native
rock considerably, as the rubbish filled some
rooms completely, and about half filled the
remainder. Even in the sloping passage a small
tunnel had been run back into the rock, just
where this sloping passage joins the shaft, in
order to be sure that no hidden rooms or
passages might be missed.

33. As the inside has been seriously altered,
I think the best idea of the form and history of
the tomb Avill be given by attempting to describe
the first plundering. Perhaps it might be well