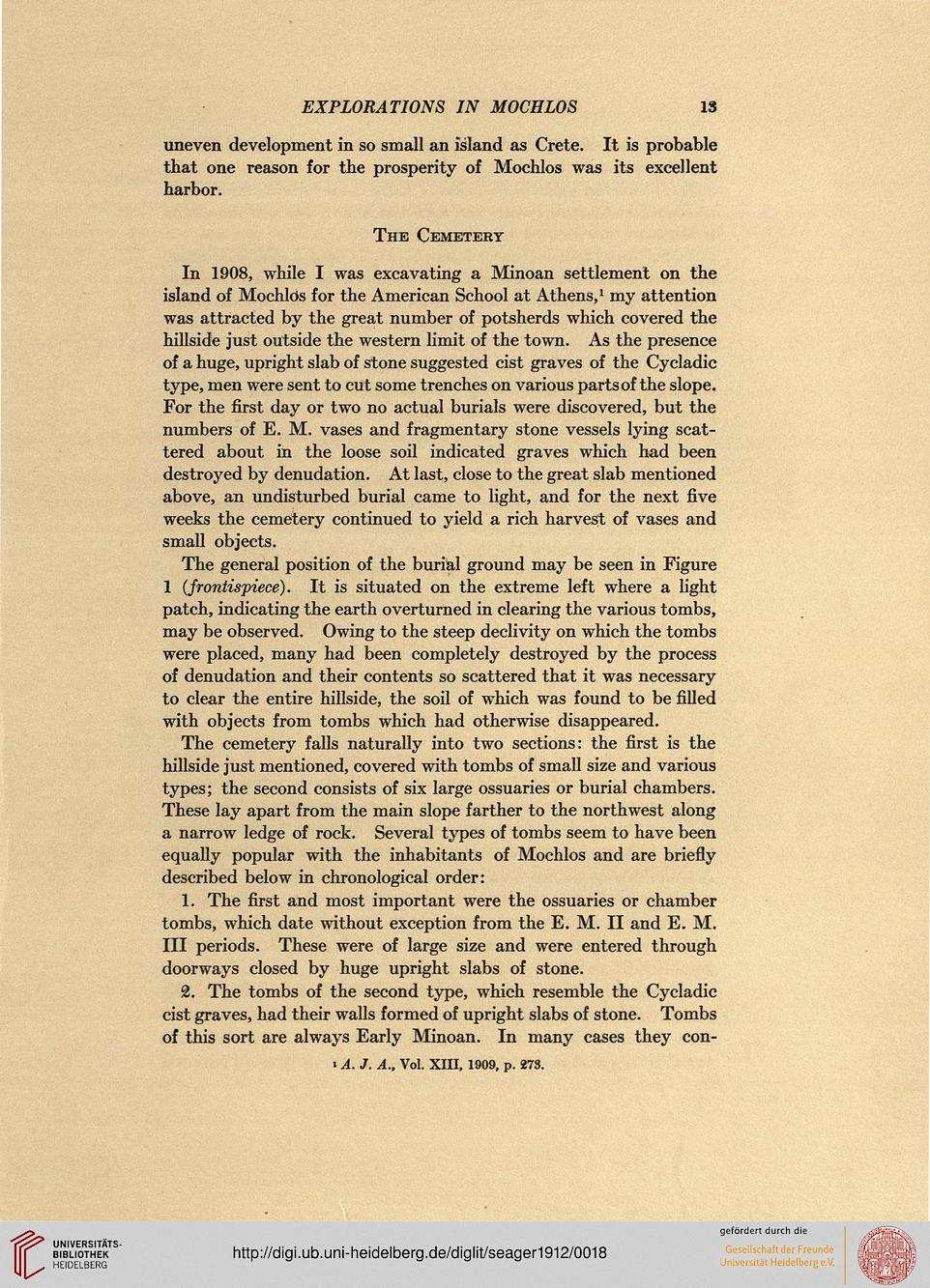 uneven development in so small an island as Crete. It is probable
that one reason for the prosperity of Mochlos was its excellent
harbor.

In 1908, while I was excavating a Minoan settlement on the
island of Mochlds for the American School at Athens,1 my attention
was attracted by the great number of potsherds which covered the
hillside just outside the western limit of the town. As the presence
of a huge, upright slab of stone suggested cist graves of the Cycladic
type, men were sent to cut some trenches on various parts of the slope.
For the first day or two no actual burials were discovered, but the
numbers of E. M. vases and fragmentary stone vessels lying scat-
tered about in the loose soil indicated graves which had been
destroyed by denudation. At last, close to the great slab mentioned
above, an undisturbed burial came to light, and for the next five
weeks the cemetery continued to yield a rich harvest of vases and
small objects.

The general position of the burial ground may be seen in Figure
1 (frontispiece). It is situated on the extreme left where a light
patch, indicating the earth overturned in clearing the various tombs,
may be observed. Owing to the steep declivity on which the tombs
were placed, many had been completely destroyed by the process
of denudation and their contents so scattered that it was necessary
to clear the entire hillside, the soil of which was found to be filled
with objects from tombs which had otherwise disappeared.

The cemetery falls naturally into two sections: the first is the
hillside just mentioned, covered with tombs of small size and various
types; the second consists of six large ossuaries or burial chambers.
These lay apart from the main slope farther to the northwest along
a narrow ledge of rock. Several types of tombs seem to have been
equally popular with the inhabitants of Mochlos and are briefly
described below in chronological order:

1. The first and most important were the ossuaries or chamber
tombs, which date without exception from the E. M. II and E. M.
Ill periods. These were of large size and were entered through
doorways closed by huge upright slabs of stone.

2. The tombs of the second type, which resemble the Cycladic
cist graves, had their walls formed of upright slabs of stone. Tombs
of this sort are always Early Minoan. In many cases they con-