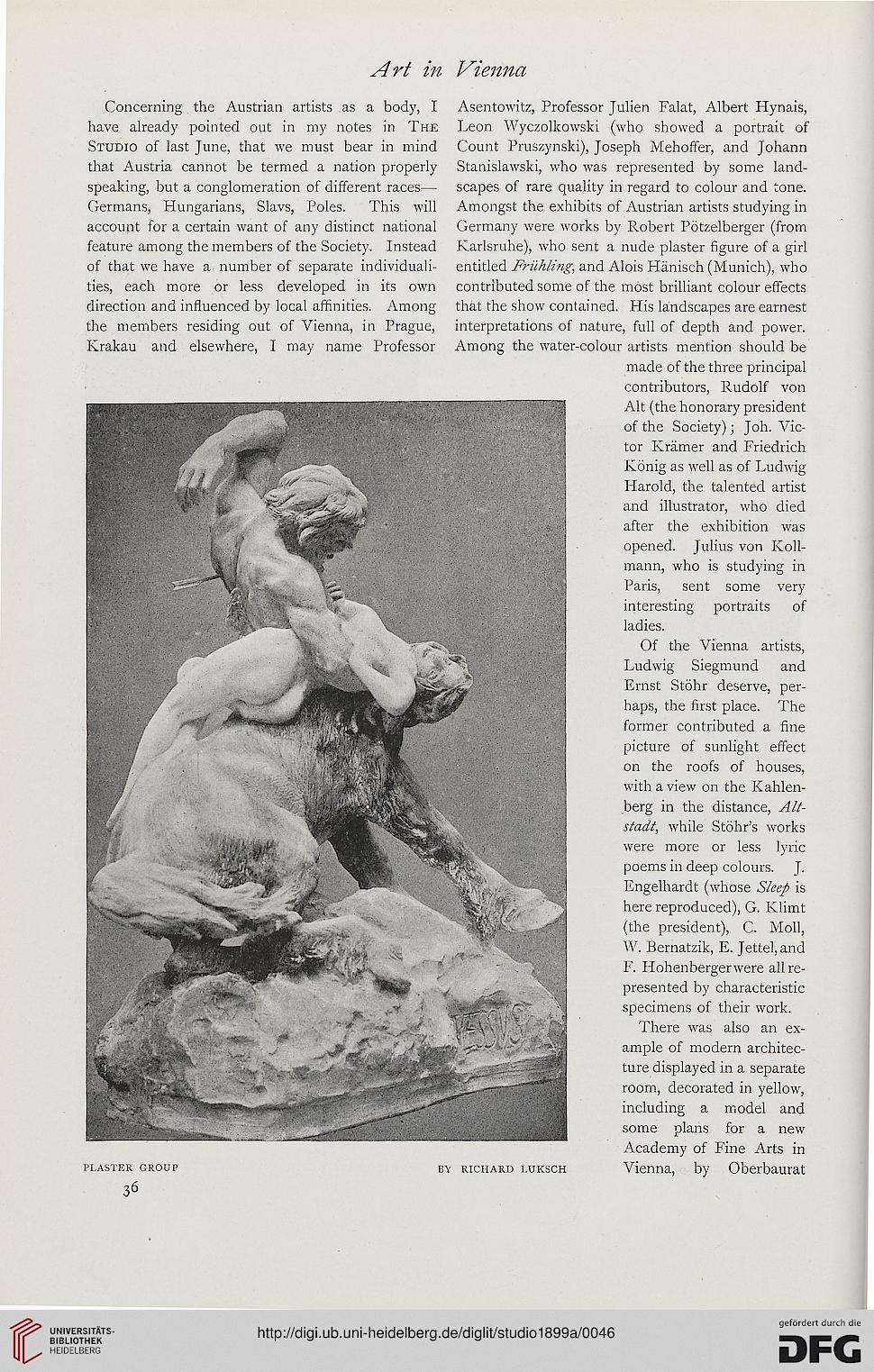 Concerning the Austrian artists as a body, I Asentowitz, Professor Julien Falat, Albert Hynais,
have already pointed out in my notes in The Leon Wyczolkowski (who showed a portrait of
Studio of last June, that we must bear in mind Count Pruszynski), Joseph Mehoffer, and Johann
that Austria cannot be termed a nation properly Stanislawski, who was represented by some land-
speaking, but a conglomeration of different races— scapes of rare quality in regard to colour and tone.
Germans, Hungarians, Slavs, Poles. This will Amongst the exhibits of Austrian artists studying in
account for a certain want of any distinct national Germany were works by Robert Potzelberger (from
feature among the members of the Society. Instead Karlsruhe), who sent a nude plaster figure of a girl
of that we have a number of separate individuali- entitled Fruhling, and Alois Hanisch (Munich), who
ties, each more or less developed in its own contributed some of the most brilliant colour effects
direction and influenced by local affinities. Among that the show contained. His landscapes are earnest
the members residing out of Vienna, in Prague, interpretations of nature, full of depth and power.
Krakau and elsewhere, I may name Professor Among the water-colour artists mention should be

made of the three principal
contributors, Rudolf von
Alt (the honorary president
of the Society); Joh. Vic-
tor Kramer and Friedrich
Konig as well as of Ludwig
Harold, the talented artist
and illustrator, who died
after the exhibition was
opened. Julius von Koll-
mann, who is studying in
Paris, sent some very
interesting portraits of
ladies.

Of the Vienna artists,
Ludwig Siegmund and
Ernst Stohr deserve, per-
haps, the first place. The
former contributed a fine
picture of sunlight effect
on the roofs of houses,
with a view on the Kahlen-
berg in the distance, Alt-
stadt, while Stohr's works
were more or less lyric
poems in deep colours. J.
Engelhardt (whose Sleep is
here reproduced), G. Klimt
(the president), C. Moll,
W. Bernatzik, E. Jettel, and
F. Hohenbergerwere all re-
presented by characteristic
specimens of their work.

There was also an ex-
ample of modern architec-
ture displayed in a separate
room, decorated in yellow,
including a model and
some plans for a new
Academy of Fine Arts in
plaster group by richard luksch Vienna, by Oberbaurat