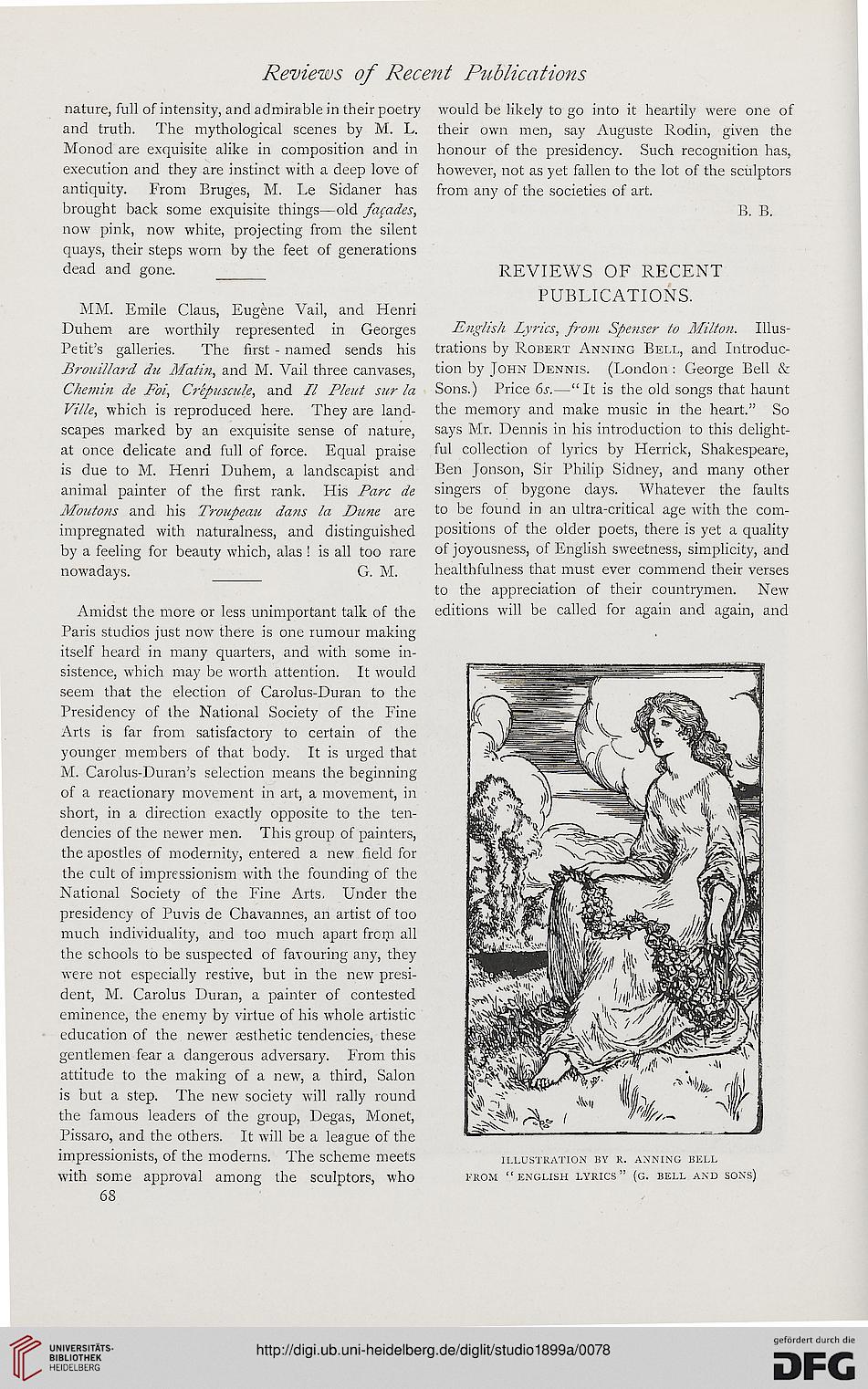 nature, full of intensity, and admirable in their poetry
and truth. The mythological scenes by M. L.
Monod are exquisite alike in composition and in
execution and they are instinct with a deep love of
antiquity. From Bruges, M. Le Sidaner has
brought back some exquisite things—old facades,
now pink, now white, projecting from the silent
quays, their steps worn by the feet of generations
dead and gone.

MM. Emile Claus, Eugene Vail, and Henri
Duhem are worthily represented in Georges
Petit's galleries. The first - named sends his
Brouillard du Matin, and M. Vail three canvases,
Chemin de Foi, Crepuscule, and II Pleut stir la
Ville, which is reproduced here. They are land-
scapes marked by an exquisite sense of nature,
at once delicate and full of force. Equal praise
is due to M. Henri Duhem, a landscapist and
animal painter of the first rank. His Pare de
Moutons and his Troupeau dans la Dune are
impregnated with naturalness, and distinguished
by a feeling for beauty which, alas ! is all too rare
nowadays. G. M.

Amidst the more or less unimportant talk of the
Paris studios just now there is one rumour making
itself heard in many quarters, and with some in-
sistence, which may be worth attention. It would
seem that the election of Carolus-Duran to the
Presidency of the National Society of the Fine
Arts is far from satisfactory to certain of the
younger members of that body. It is urged that
M. Carolus-Duran's selection means the beginning
of a reactionary movement in art, a movement, in
short, in a direction exactly opposite to the ten-
dencies of the newer men. This group of painters,
the apostles of modernity, entered a new field for
the cult of impressionism with the founding of the
National Society of the Fine Arts. Under the
presidency of Puvis de Chavannes, an artist of too
much individuality, and too much apart frorn all
the schools to be suspected of favouring any, they
were not especially restive, but in the new presi-
dent, M. Carolus Duran, a painter of contested
eminence, the enemy by virtue of his whole artistic
education of the newer Eesthetic tendencies, these
gentlemen fear a dangerous adversary. From this
attitude to the making of a new, a third, Salon
is but a step. The new society will rally round
the famous leaders of the group, Degas, Monet,
Pissaro, and the others. It will be a league of the
impressionists, of the moderns. The scheme meets
with some approval among the sculptors, who
68

would be likely to go into it heartily were one of
their own men, say Auguste Rodin, given the
honour of the presidency. Such recognition has,
however, not as yet fallen to the lot of the sculptors
from any of the societies of art.

English Lyrics, from Spenser to Milton. Illus-
trations by Robert Anning Bell, and Introduc-
tion by John Dennis. (London : George Bell &
Sons.) Price 6s.—" It is the old songs that haunt
the memory and make music in the heart." So
says Mr. Dennis in his introduction to this delight-
ful collection of lyrics by Herrick, Shakespeare,
Ben Jonson, Sir Philip Sidney, and many other
singers of bygone days. Whatever the faults
to be found in an ultra-critical age with the com-
positions of the older poets, there is yet a quality
of joyousness, of English sweetness, simplicity, and
healthfulness that must ever commend their verses
to the appreciation of their countrymen. New
editions will be called for again and again, and