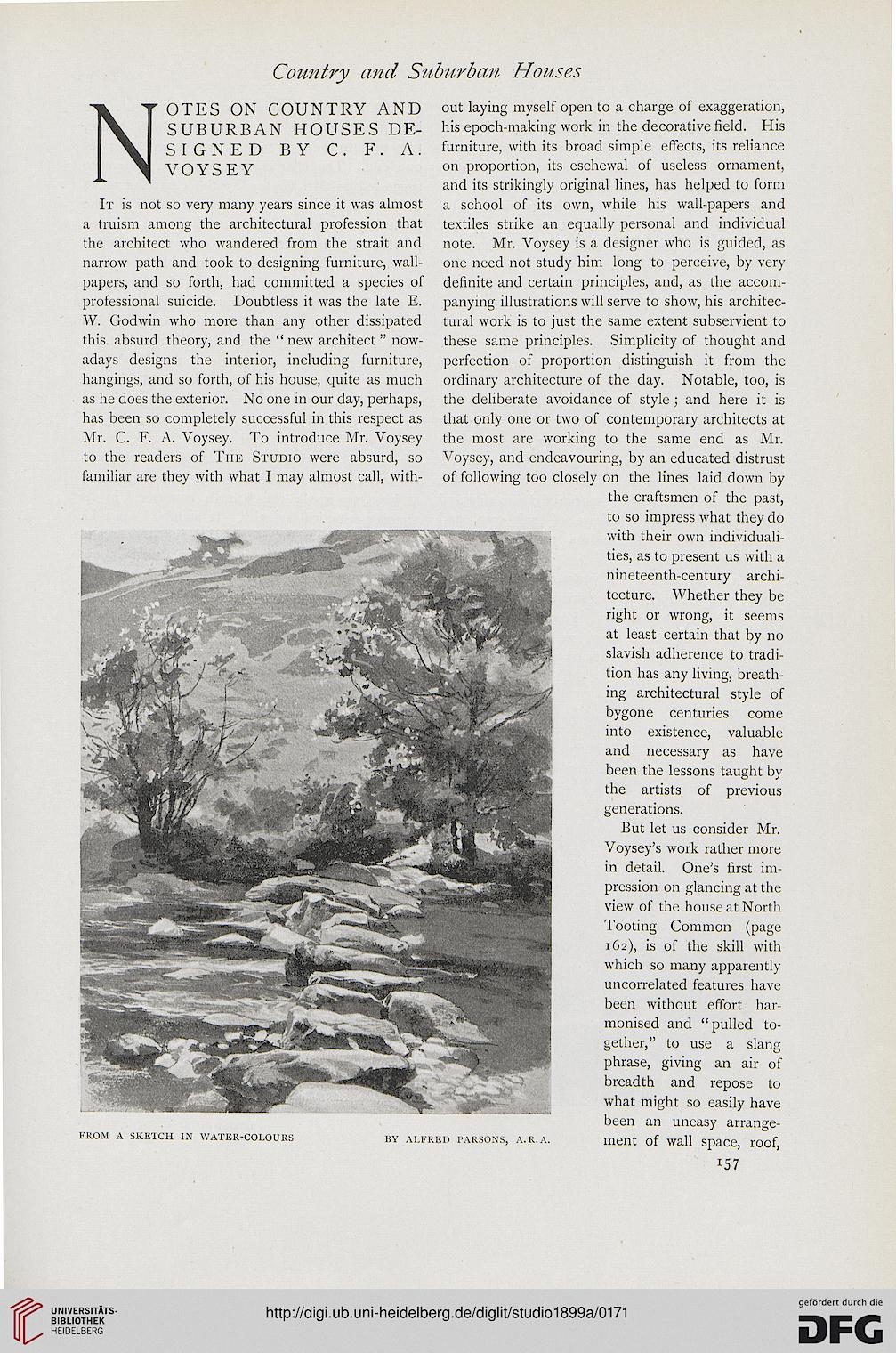 NOTES ON COUNTRY AND out laying myself open to a charge of exaggeration,
SUBURBAN HOUSES DE- his epoch-making work in the decorative field. His
SIGNED BY C. F. A. furniture, with its broad simple effects, its reliance
VOYSEY on proportion, its eschewal of useless ornament,

and its strikingly original lines, has helped to form
It is not so very many years since it was almost a school of its own, while his wall-papers and
a truism among the architectural profession that textiles strike an equally personal and individual
the architect who wandered from the strait and note. Mr. Voysey is a designer who is guided, as
narrow path and took to designing furniture, wall- one need not study him long to perceive, by very
papers, and so forth, had committed a species of definite and certain principles, and, as the accom-
professional suicide. Doubtless it was the late E. panying illustrations will serve to show, his architec-
W. Godwin who more than any other dissipated tural work is to just the same extent subservient to
this absurd theory, and the " new architect " now- these same principles. Simplicity of thought and
adays designs the interior, including furniture, perfection of proportion distinguish it from the
hangings, and so forth, of his house, quite as much ordinary architecture of the day. Notable, too, is
as he does the exterior. No one in our day, perhaps, the deliberate avoidance of style ; and here it is
has been so completely successful in this respect as that only one or two of contemporary architects at
Mr. C. F. A. Voysey. To introduce Mr. Voysey the most are working to the same end as Mr.
to the readers of The Studio were absurd, so Voysey, and endeavouring, by an educated distrust
familiar are they with what I may almost call, with- of following too closely on the lines laid down by

the craftsmen of the past,
to so impress what they do
with their own individuali-
ties, as to present us with a
nineteenth-century archi-
tecture. Whether they be
right or wrong, it seems
at least certain that by no
slavish adherence to tradi-
tion has any living, breath-
ing architectural style of
bygone centuries come
into existence, valuable
and necessary as have
been the lessons taught by
the artists of previous
generations.

But let us consider Mr.
Voysey's work rather more
in detail. One's first im-
pression on glancing at the
view of the house at North
Tooting Common (page
162), is of the skill with
which so many apparently
uncorrelated features have
been without effort har-
monised and "pulled to-
gether," to use a slang
phrase, giving an air of
breadth and repose to
what might so easily have
been an uneasy arrange-

FROM A SKETCH IN WATER-COLOURS BY ALFRED PARSONS, A.R.A. ment of Wall Space, rOOf,