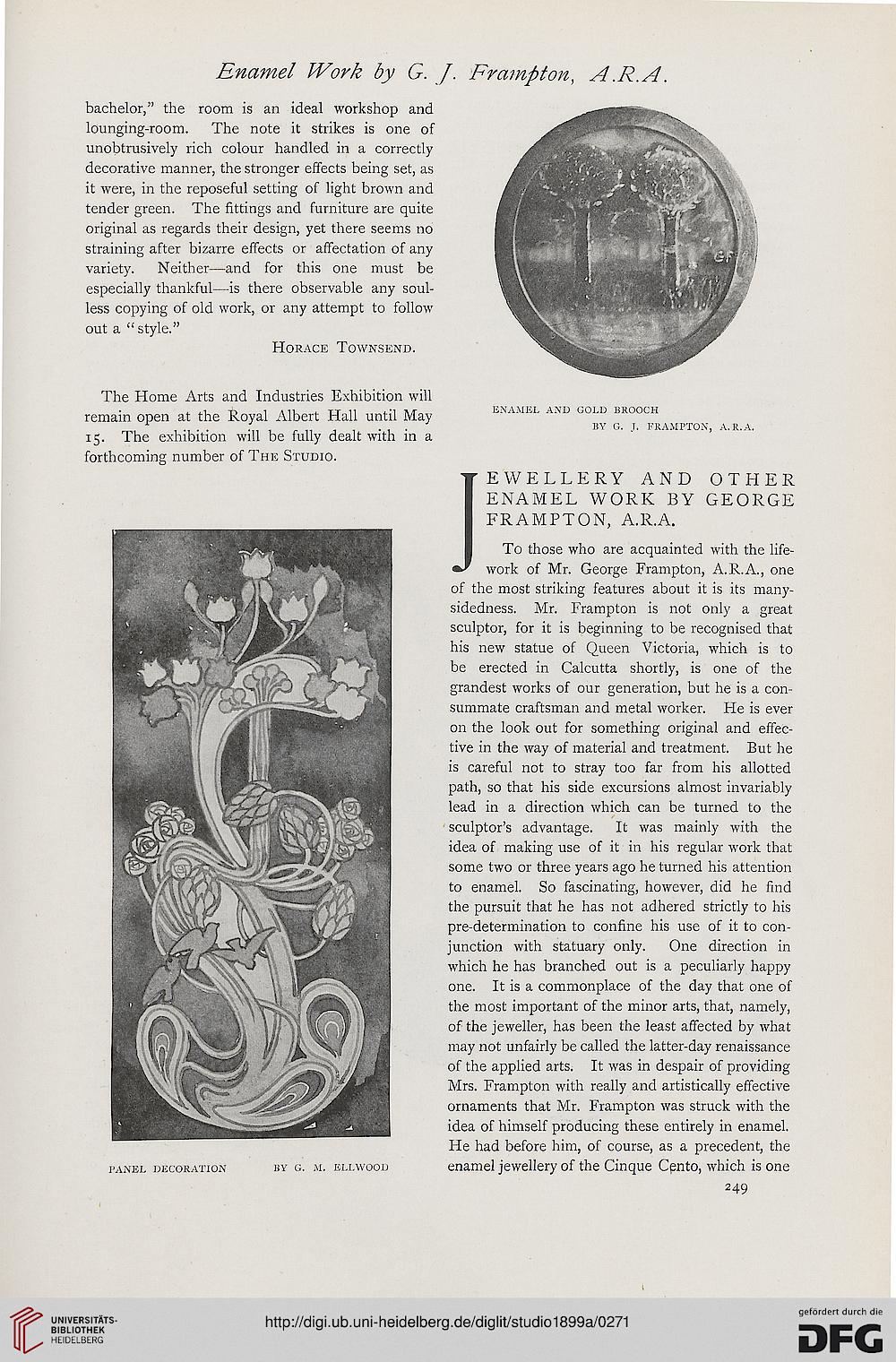 bachelor," the room is an ideal workshop and
lounging-room. The note it strikes is one of
unobtrusively rich colour handled in a correctly
decorative manner, the stronger effects being set, as
it were, in the reposeful setting of light brown and
tender green. The fittings and furniture are quite
original as regards their design, yet there seems no
straining after bizarre effects or affectation of any
variety. Neither—and for this one must be
especially thankful—is there observable any soul-
less copying of old work, or any attempt to follow
out a " style."

The Home Arts and Industries Exhibition will
remain open at the Royal Albert Hall until May
15. The exhibition will be fully dealt with in a
forthcoming number of The Studio.

JEWELLERY AND OTHER
ENAMEL WORK BY GEORGE
FRAMPTON, A.R.A.
To those who are acquainted with the life-
work of Mr. George Frampton, A.R.A., one
of the most striking features about it is its many-
sidedness. Mr. Frampton is not only a great
sculptor, for it is beginning to be recognised that
his new statue of Queen Victoria, which is to
be erected in Calcutta shortly, is one of the
grandest works of our generation, but he is a con-
summate craftsman and metal worker. He is ever
on the look out for something original and effec-
tive in the way of material and treatment. But he
is careful not to stray too far from his allotted
path, so that his side excursions almost invariably
lead in a direction which can be turned to the
sculptor's advantage. It was mainly with the
idea of making use of it in his regular work that
some two or three years ago he turned his attention
to enamel. So fascinating, however, did he find
the pursuit that he has not adhered strictly to his
pre-determination to confine his use of it to con-
junction with statuary only. One direction in
which he has branched out is a peculiarly happy
one. It is a commonplace of the day that one of
the most important of the minor arts, that, namely,
of the jeweller, has been the least affected by what
may not unfairly be called the latter-day renaissance
of the applied arts. It was in despair of providing
Mrs. Frampton with really and artistically effective
ornaments that Mr. Frampton was struck with the
idea of himself producing these entirely in enamel.
He had before him, of course, as a precedent, the
enamel jewellery of the Cinque Cento, which is one