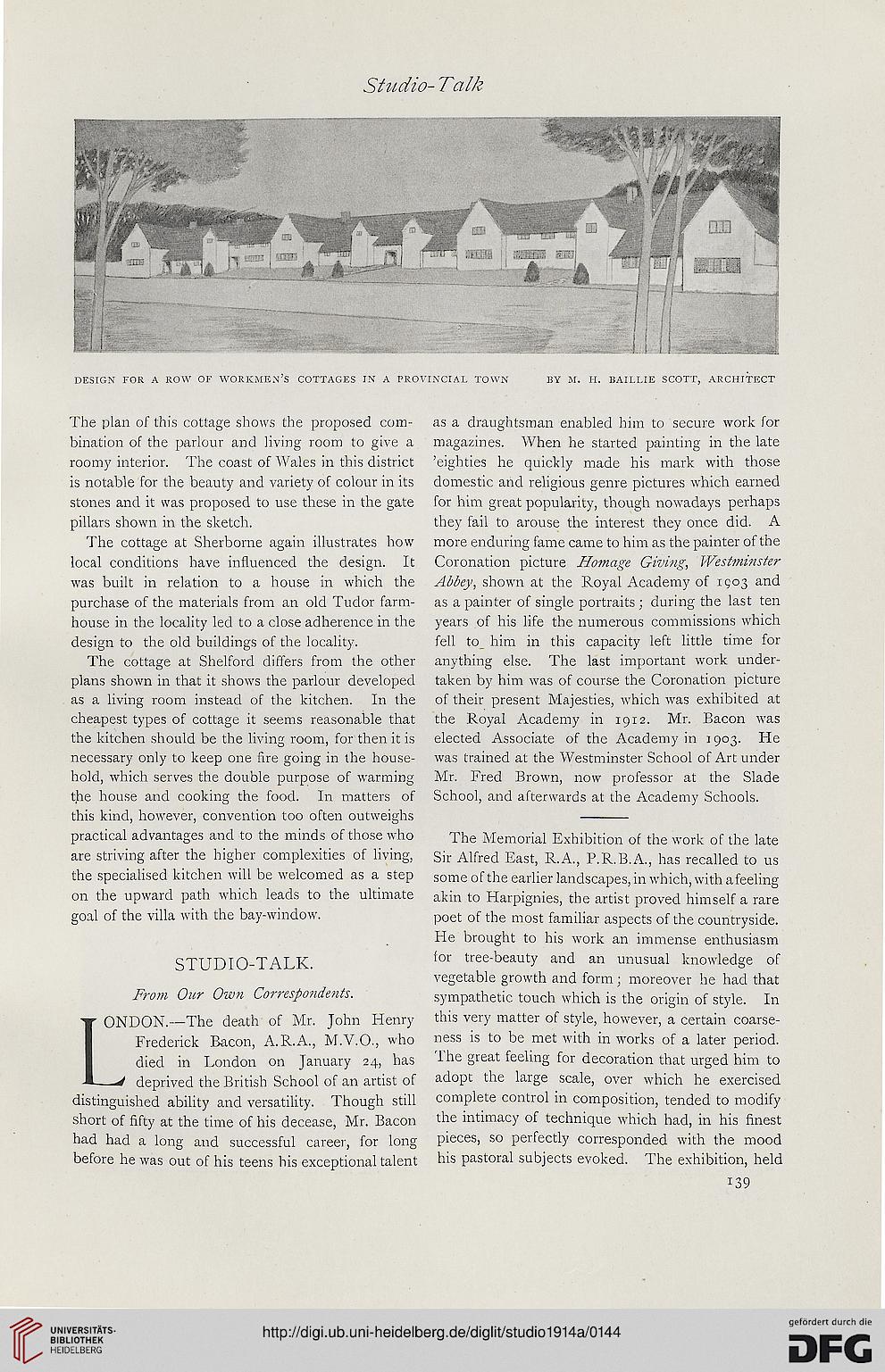 DESIGN FOR A ROW OF WORKMEN S COTTAGES IN A PROVINCIAL TOWN BY M. H. BAILLIE SCOTT, ARCHITECT

bination of the parlour and living room to give a magazines. When he started painting in the late

roomy interior. The coast of Wales in this district 'eighties he quickly made his mark with those

stones and it was proposed to use these in the gate for him great popularity, though nowadays perhaps

pillars shown in the sketch. they fail to arouse the interest they once did. A

was built in relation to a house in which the Abbey, shown at the Royal Academy of IC03 and

purchase of the materials from an old Tudor farm- as a painter of single portraits ; during the last ten

design to the old buildings of the locality. fell to him in this capacity left little time for

The cottage at Shelford differs from the other anything else. The last important work under-
pins shown in that it shows the parlour developed taken by him was of course the Coronation picture
as a living room instead of the kitchen. In the of their present Majesties, which was exhibited at
cheapest types of cottage it seems reasonable that the Royal Academy in 1912. Mr. Bacon was
the kitchen should be the living room, for then it is elected Associate of the Academy in 1903. He
necessary only to keep one fire going in the house- was trained at the Westminster School of Art under
hold, which serves the double purpose of warming Mr. Fred Brown, now professor at the Slade
the house and cooking the food. In matters of School, and afterwards at the Academy Schools,
this kind, however, convention too often outweighs -

practical advantages and to the minds of those who The Memorial Exhibition of the work of the late
are striving after the higher complexities of living, sir Alfred East, R.A., P.R.B.A., has recalled to us
the specialised kitchen will be welcomed as a step some of the earlier landscapes, in which, with afeeling
on the upward path which leads to the ultimate akin to Harpignies, the artist proved himself a rare
goal of the villa with the bay-window. poet of the most familiar aspects of the countryside.

He brought to his work an immense enthusiasm
STUDIO-TALK. ior tree"beauty and an unusual knowledge of

vegetable growth and form; moreover he had that
From Our Own Correspondents. sympathetic touch which is the origin of style. In

IONDON.—The death of Mr. John Henry this very matter of style, however, a certain coarse-
Frederick Bacon, A.R.A., M.V.O., who ness is to be met with in works of a later period,
died in London on January 24, has The great feeling for decoration that urged him to
deprived the British School of an artist of adopt the large scale, over which he exercised
distinguished ability and versatility. Though still complete control in composition, tended to modify
short of fifty at the time of his decease, Mr. Bacon the intimacy of technique which had, in his finest
had had a long and successful career, for long pieces, so perfectly corresponded with the mood
before he was out of his teens his exceptional talent his pastoral subjects evoked. The exhibition, held