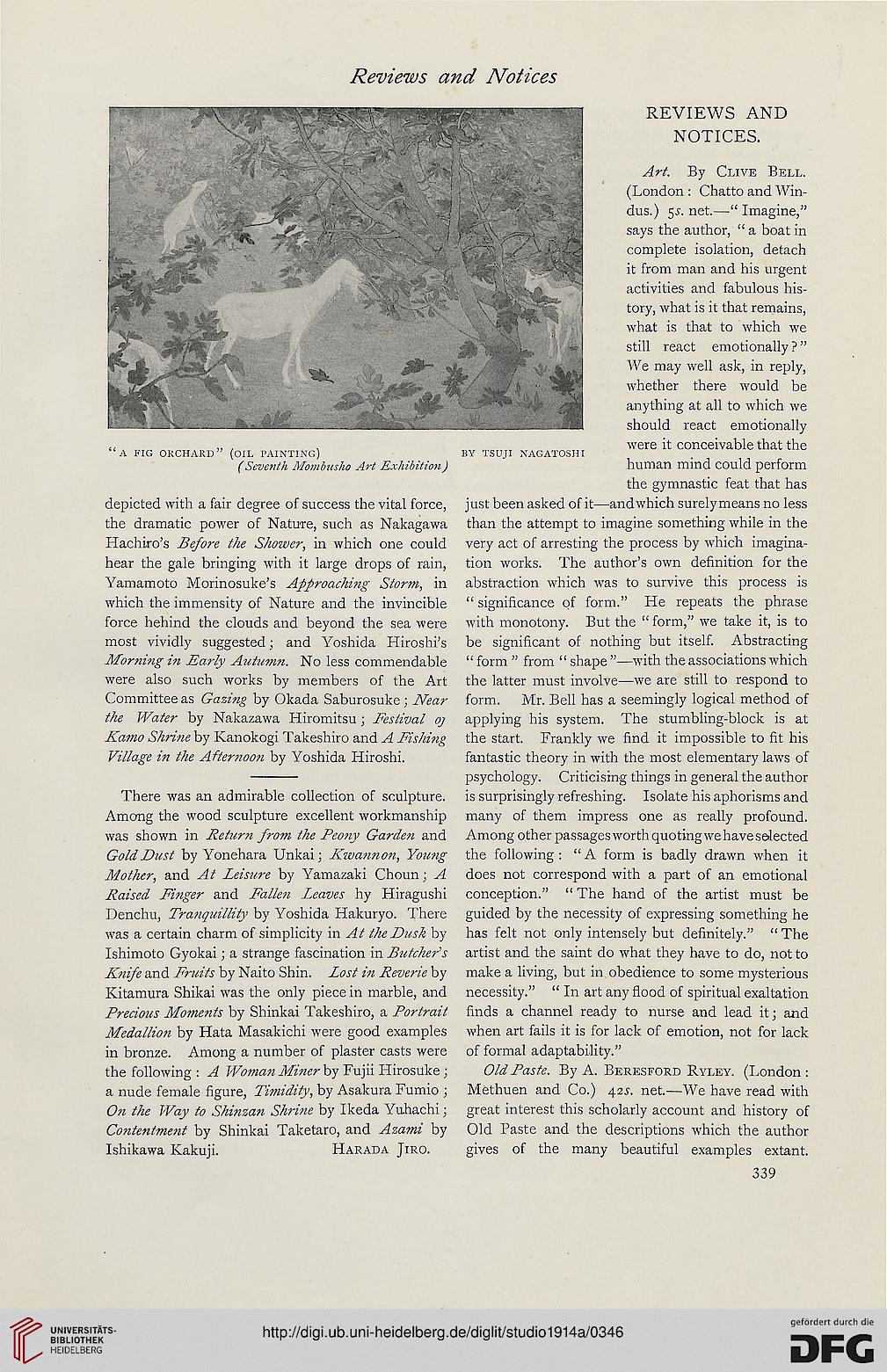 Art. By Clive Bell.
(London : Chatto and Win-
dus.) 5s. net.—" Imagine,"
says the author, " a boat in
complete isolation, detach
it from man and his urgent
activities and fabulous his-
tory, what is it that remains,
what is that to which we
still react emotionally ?"
We may well ask, in reply,
whether there would be
anything at all to which we
should react emotionally
„ , . were it conceivable that the

the gymnastic feat that has

depicted with a fair degree of success the vital force, just been asked of it—and which surely means no less

the dramatic power of Nature, such as Nakagawa than the attempt to imagine something while in the

Hachiro's Before the Shower, in which one could very act of arresting the process by which imagina-

hear the gale bringing with it large drops of rain, tion works. The author's own definition for the

Yamamoto Morinosuke's Approaching Storm, in abstraction which was to survive this process is

which the immensity of Nature and the invincible " significance of form." He repeats the phrase

force hehind the clouds and beyond the sea were with monotony. But the " form," we take it, is to

most vividly suggested; and Yoshida Hiroshi's be significant of nothing but itself. Abstracting

Morning in Early Autumn. No less commendable " form " from " shape "—with the associations which

Committee as Gazing by Okada Saburosuke ; Near form. Mr. Bell has a seemingly logical method of

the Water by Nakazawa Hiromitsu; Festival oj applying his system. The stumbling-block is at

Kamo Shrine by Kanokogi Takeshiro and A Fishing the start. Frankly we find it impossible to fit his

Village in the Afternoon by Yoshida Hiroshi. fantastic theory in with the most elementary laws of

There was an admirable collection of sculpture, is surprisingly refreshing. Isolate his aphorisms and

Among the wood sculpture excellent workmanship many of them impress one as really profound,

Gold Dust by Yonehara Unkai; Kwannon, Young the following: "A form is badly drawn when it

Mother, and At Leisure by Yamazaki Choun; A does not correspond with a part of an emotional

Raised Finger and Fallen Leaves hy Hiragushi conception." " The hand of the artist must be

Denchu, Tranquillity by Yoshida Hakuryo. There guided by the necessity of expressing something he

was a certain charm of simplicity in At the Dusk by has felt not only intensely but definitely." "The

Ishimoto Gyokai; a strange fascination in Butcher's artist and the saint do what they have to do, not to

Knife and Fruits by Naito Shin. Lost in Reverie by make a living, but in obedience to some mysterious

Kitamura Shikai was the only piece in marble, and necessity." " In art any flood of spiritual exaltation

Precious Moments by Shinkai Takeshiro, a Portrait finds a channel ready to nurse and lead it; and

Medallion by Hata Masakichi were good examples when art fails it is for lack of emotion, not for lack

in bronze. Among a number of plaster casts were of formal adaptability."

the following : A Woman Miner by Fujii Hirosuke ; Old Paste. By A. Beresford Ryley. (London:

a nude female figure, Timidity, by Asakura Fumio ; Methuen and Co.) 425. net.—We have read with

On the Way to Shinzan Shrine by Ikeda Yuhachi; great interest this scholarly account and history of

Contentment by Shinkai Taketaro, and Azami by Old Paste and the descriptions which the author