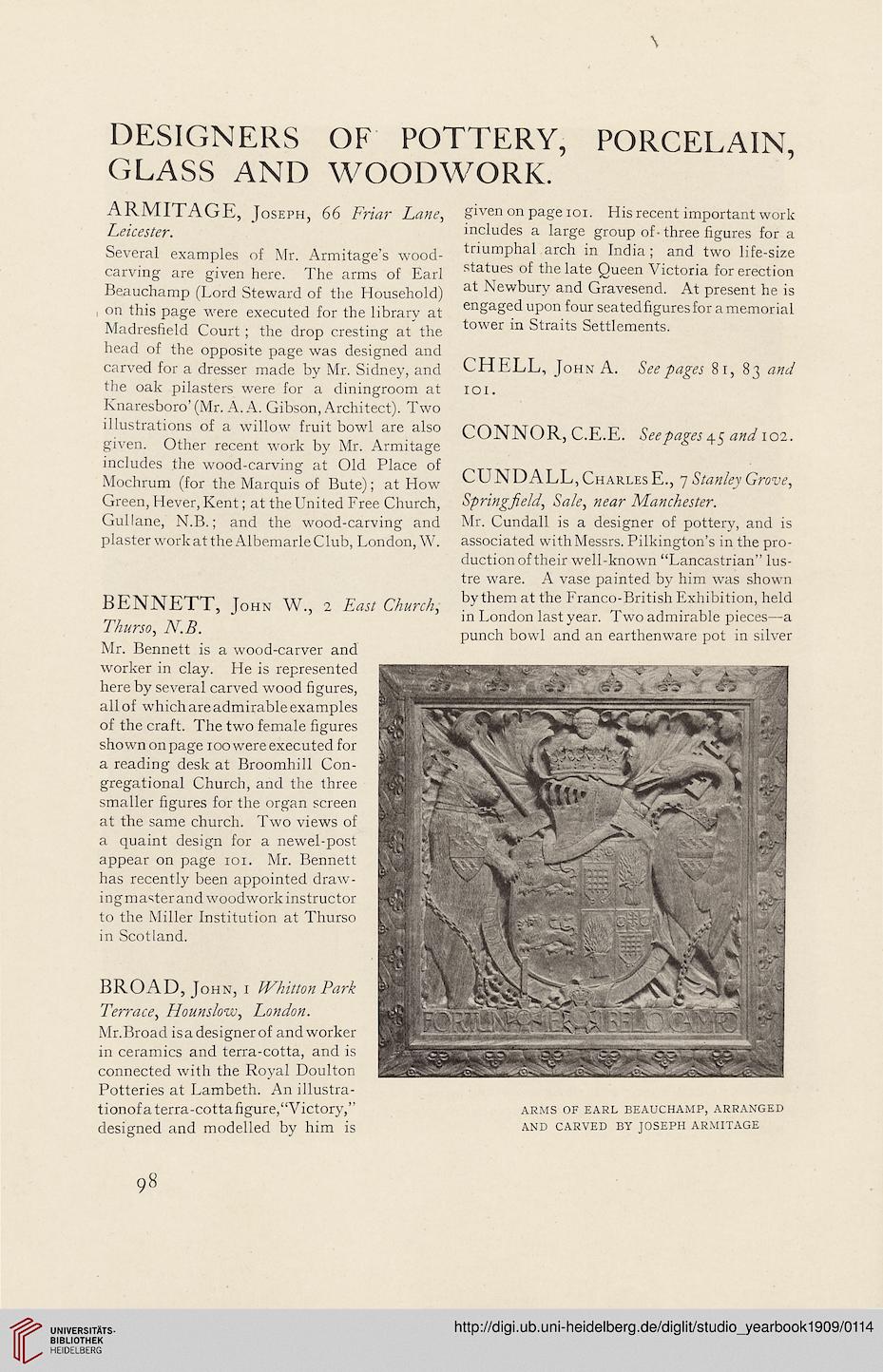 ARMITAGE, Joseph, 66 Friar Lane,
Leicester.
Several examples of Mr. Armitage’s wood-
carving are given here. The arms of Earl
Beauchamp (Lord Steward of the Household)
on this page were executed for the library at
Madresfield Court ; the drop cresting at the
head of the opposite page was designed and
carved for a dresser made by Mr. Sidney, and
the oak pilasters were for a diningroom at
Ivnaresboro’(Mr. A. A. Gibson, Architect). Two
illustrations of a willow fruit bowl are also
given. Other recent work by Mr. Armitage
includes the wood-carving at Old Place of
Mochrum (for the Marquis of Bute); at How
Green, Hever, Kent; at the United Free Church,
Gullane, N.B.; and the wood-carving and
plaster work at the Albemarle Club, London, W.

BENNETT, J ohn W., 1 East Church,
Thurso, N.B.
Mr. Bennett is a wood-carver and
worker in clay. He is represented
here by several carved wood figures,
all of which are admirable examples
of the craft. The two female figures
shown on page ioo were executed for
a reading desk at Broomhill Con-
gregational Church, and the three
smaller figures for the organ screen
at the same church. Two views of
a quaint design for a newel-post
appear on page ioi. Mr. Bennett
has recently been appointed draw-
ingmaster and woodwork instructor
to the Miller Institution at Thurso
in Scotland.
BROAD, John, i Whitton Park
Terrace, Hounslow, London.
Mr.Broad isadesignerof and worker
in ceramics and terra-cotta, and is
connected with the Royal Doulton
Potteries at Lambeth. An illustra-
tionofa terra-cotta figure,“Victory,”
designed and modelled by him is

given on page ioi. His recent important work
includes a large group of-three figures for a
triumphal arch in India; and two life-size
statues of the late Queen Victoria for erection
at Newbury and Gravesend. At present he is
engaged upon four seated figures for a memorial
tower in Straits Settlements.
CHELL, John A. Seepages 81, 83 and
IOI.
CONNOR, C.E.E. Seepages 45 and 102.
CUNDALL, Charles E., 7 Stanley Grove,
Springfield, Sale, near Manchester.
Mr. Cundall is a designer of pottery, and is
associated with Messrs. Pilkington’s in the pro-
duction of their wrell-known “Lancastrian” lus-
tre ware. A vase painted by him was shown
by them at the Franco-British Exhibition, held
in London last year. Two admirable pieces—a

punch bowl and an earthenware pot in silver


ARMS OF EARL BEAUCHAMP, ARRANGED
AND CARVED BY JOSEPH ARMITAGE