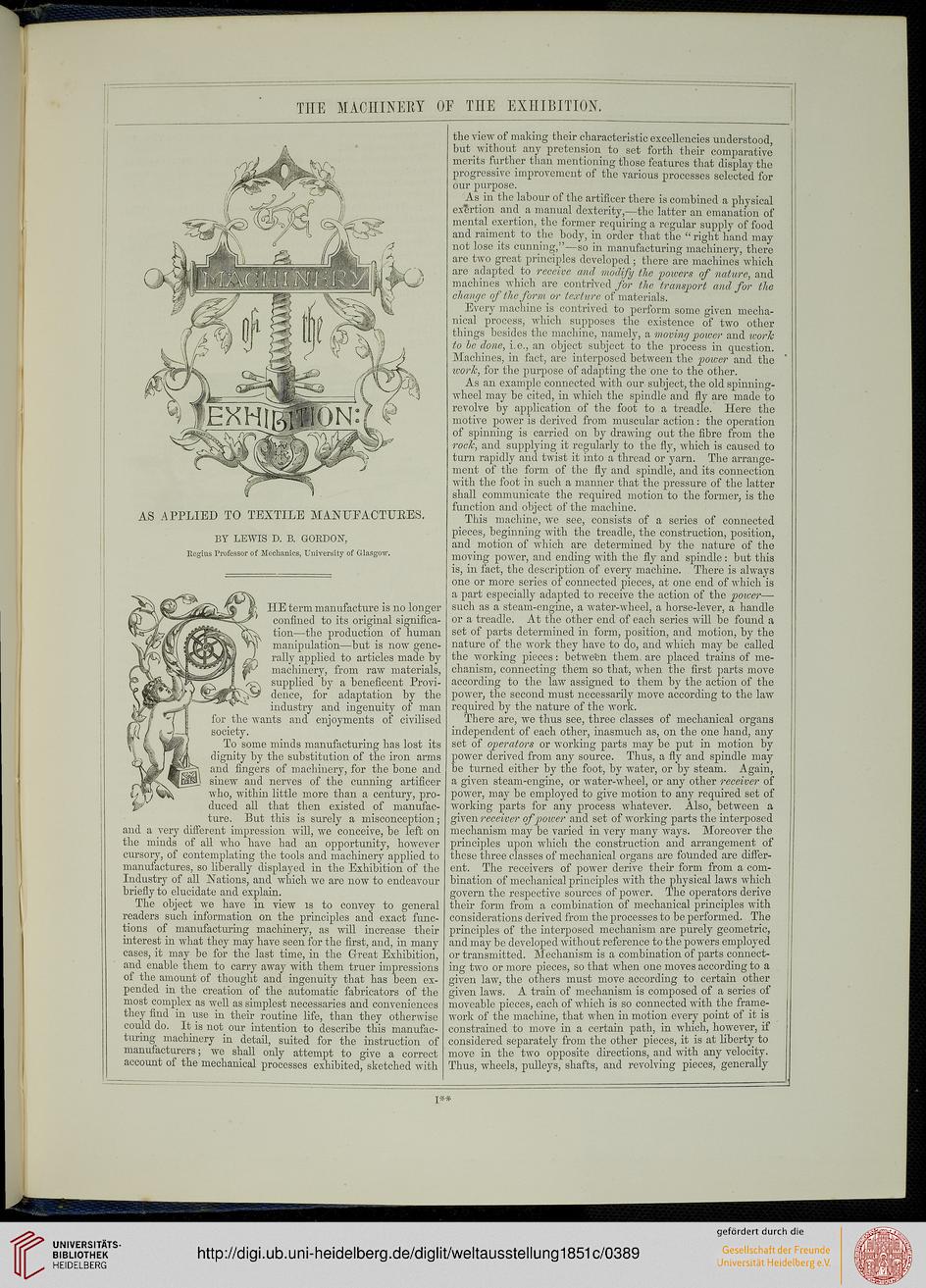 AS APPLIED TO TEXTILE MANUFACTURES.

BY LEWIS D. B. GORDON,
Regius Professor of Mechanics, University of Glasgow.

HE term manufacture is no longer
confined to its original significa-
tion—the production of human
manipulation—but is now gene-
rally applied to articles made by
machinery, from raw materials,
supplied by a beneficent Provi-
dence, for adaptation by the
industry and ingenuity of man
for the wants and enjoyments of civilised
society.

To some minds manufacturing has lost its
dignity by the substitution of the iron arms
and fingers of machinery, for the bone and
sinew and nerves of the cunning artificer
who, within little more than a century, pro-
duced all that then existed of manufac-
ture. But this is surely a misconception;
and a very different impression will, we conceive, be left on
the minds of all who have had an opportunity, however
cursory, of contemplating the tools and machinery applied to
manufactures, so liberally displayed in the Exhibition of the
Industry of all Nations, and which we are now to endeavour
briefly to elucidate and explain.

The object we have in view is to convey to general
readers such information on the principles and exact func-
tions of manufacturing machinery, as will increase their
interest in what they may have seen for the first, and, in many
cases, it may be for the last time, in the Great Exhibition,
and enable them to carry away with them truer impressions
of the amount of thought and ingenuity that has been ex-
pended in the creation of the automatic fabricators of the
most complex as well as simplest necessaries and conveniences
they find in use in their routine life, than they otherwise
could do. It is not our intention to describe this manufac-
turing machinery in detail, suited for the instruction of
manufacturers; we shall only attempt to give a correct
account of the mechanical processes exhibited, sketched with

the view of making their characteristic excellencies understood,
but without any pretension to set forth their comparative
merits further than mentioning those features that display the
progressive improvement of the various processes selected for
our purpose.

As in the labour of the artificer there is combined a physical
exertion and a manual dexterity,—the latter an emanation of
mental exertion, the former requiring a regular supply of food
and raiment to the body, in order that the " right hand may
not lose its cunning,"—so in manufacturing machinery, there
are two great principles developed ; there are machines which
are adapted to receive and modify the -powers of nature, and
machines which are contrived for the transport and for the
change of the form or texture of materials.

_ Every machine is contrived to perform some given mecha-
nical process, which supposes the existence of two other
things besides the machine, namely, a moving power and work
to be done, i.e., an object subject to the process in question.
Machines, in fact, are interposed between the poiver and the
work, for the purpose of adapting the one to the other.

As an example connected with our subject, the old spinning-
wheel may be cited, in which the spindle and fly are made to
revolve by application of the foot to a treadle. Here the
motive power is derived from muscular action: the operation
of spinning is carried on by drawing out the fibre from the
rock, and supplying it regularly to the fly, which is caused to
tarn rapidly and twist it into a thread or yarn. The arrange-
ment of the form of the fly and spindle, and its connection
with the foot in such a manner that the pressure of the latter
shall communicate the required motion to the former, is the
function and object of the machine.

This machine, we see, consists of a series of connected
pieces, beginning with the treadle, the construction, position,
and motion of which are determined by the nature of the
moving power, and ending with the fly and spindle: but this
is, in fact, the description of every machine. There is always
one or more series of connected pieces, at one end of which is
a part especially adapted to receive the action of the power—
such as a steam-engine, a water-wheel, a horse-lever, a handle
or a treadle. At the other end of each series will be found a
set of parts determined in form, position, and motion, by the
nature of the work they have to do, and which may be called
the working pieces: between them are placed trains of me-
chanism, connecting them so that, when the first parts move
according to the law assigned to them by the action of the
power, the second must necessarily move according to the law
required by the nature of the work.

There are, we thus see, three classes of mechanical organs
independent of each other, inasmuch as, on the one hand, any
set of operators or working parts may be put in motion by
power derived from any source. Thus, a fly and spindle may
be turned either by the foot, by water, or by steam. Again,
a given steam-engine, or water-wheel, or any other receiver of
power, may be employed to give motion to any required set of
working parts for any process whatever. Also, between a
given receiver of power and set of working parts the interposed
mechanism may be varied in very many Avays. Moreover the
principles upon which the construction and arrangement of
these three classes of mechanical organs are founded are differ-
ent. The receivers of power derive their form from a com-
bination of mechanical principles with the physical laws which
govern the respective sources of power. The operators derive
their form from a combination of mechanical principles with
considerations derived from the processes to be performed. The
principles of the interposed mechanism are purely geometric,
and may be developed without reference to the powers employed
or transmitted. Mechanism is a combination of parts connect-
ing two or more pieces, so that when one moves according to a
given law, the others must move according to certain other
given laws. A train of mechanism is composed of a series of
moveable pieces, each of which is so connected with the frame-
work of the machine, that when in motion every point of it is
constrained to move in a certain path, in which, however, if
considered separately from the other pieces, it is at liberty to
move in the two opposite directions, and with any velocity.
Thus, wheels, pulleys, shafts, and revolving pieces, generally