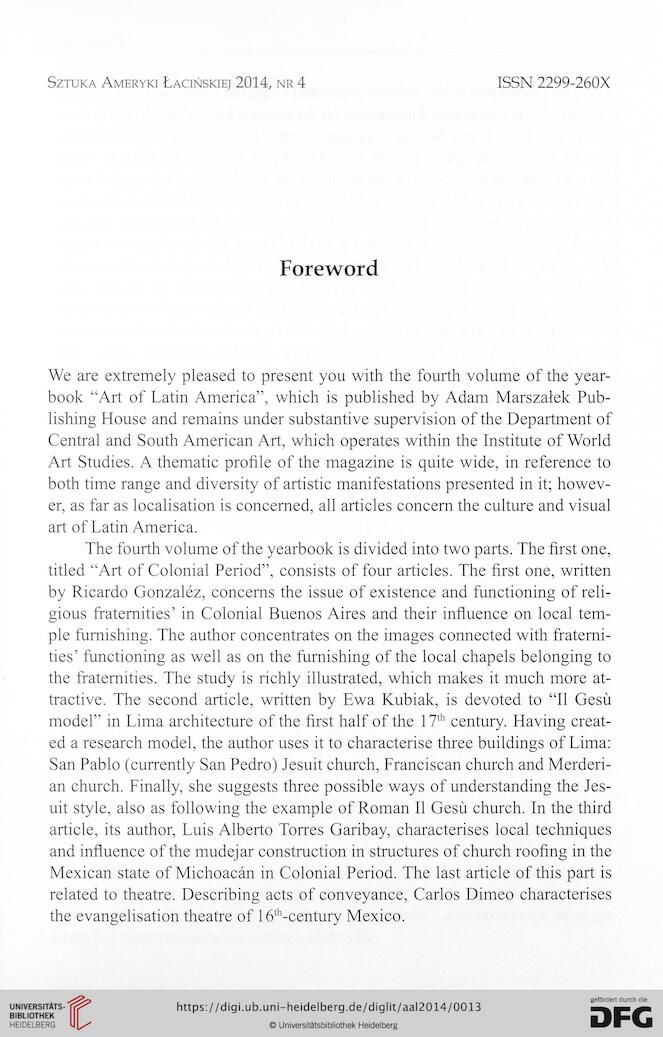 We are extremely pleased to present you with the fourth volume of the year-
book “Art of Latin America”, which is published by Adam Marszałek Pub-
lishing House and remains under substantive supervision of the Department of
Central and South American Art, which operates within the Institute of World
Art Studies. A thematic profile of the magazine is quite wide, in reference to
both time range and diversity of artistic manifestations presented in it; howev-
er, as far as localisation is concerned, all articles concern the culture and visual
art of Latin America.
The fourth volume of the yearbook is divided into two parts. The first one,
titled “Art of Colonial Period”, consists of four articles. The first one, written
by Ricardo Gonzalez, concerns the issue of existence and functioning of reli-
gious fraternities’ in Colonial Buenos Aires and their influence on local tem-
ple furnishing. The author concentrates on the images connected with fraterni-
ties’ functioning as well as on the furnishing of the local chapels belonging to
the fraternities. The study is richly illustrated, which makes it much more at-
tractive. The second article, written by Ewa Kubiak, is devoted to “11 Gesu
model” in Lima architecture of the first half of the 17th century. Having creat-
ed a research model, the author uses it to characterise three buildings of Lima:
San Pablo (currently San Pedro) Jesuit church, Franciscan church and Merderi-
an church. Finally, she suggests three possible ways of understanding the Jes-
uit style, also as following the example of Roman II Gesu church. In the third
article, its author, Luis Alberto Torres Garibay, characterises local techniques
and influence of the mudejar construction in structures of church roofing in the
Mexican state of Michoacan in Colonial Period. The last article of this part is
related to theatre. Describing acts of conveyance, Carlos Dimeo characterises
the evangelisation theatre of 16th-century Mexico.