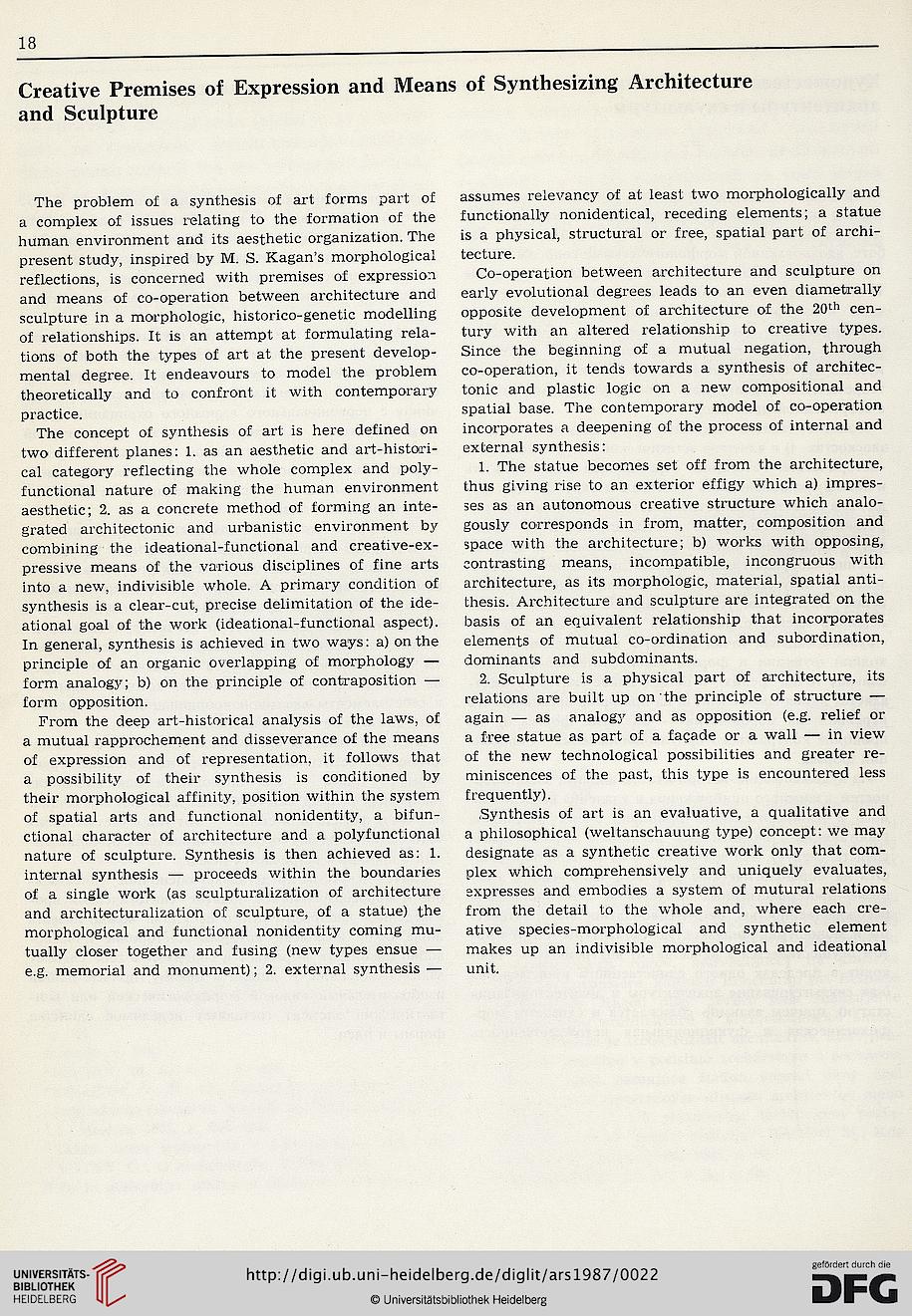 Creative Premises of Expression and Means of Synthesizing Architecture
and Sculpture

The problém of a synthesis of art íorms part of
a complex of issues relating to the formation of the
human environment and its aesfhetic organization. The
present study, inspired by M. S. Kagan's morphological
reflections, is concerned with premises of expression
and means of co-operation between architecture and
sculpture in a morphologie, historico-genetic modelling
of relationships. It is an attempt at formulating rela-
tions of both the types of art at the present develop-
mental degree. It endeavours to model the problém
theoretically and to confront it with contemporary
practice.
The concept of synthesis of art is here defined on
two different planes: 1. as an aesthetic and art-histori-
cal category reflecting the whole complex and poly-
functional nature of making the human environment
aesthetic; 2. as a concrète method of forming an inte-
grated architectonie and urbanistic environment by
combining the ideational-functional and creative-ex-
pressive means of the various disciplines of fine arts
into a new, indivisible whole. A primary condition of
synthesis is a clear-cut, précisé délimitation of the ide-
ational goal of the work (ideational-functional aspect).
In general, synthesis is achieved in two ways: a) on the
principle of an organic overlapping of morphology —
form analogy; b) on the principle of contraposition —
form opposition.
From the deep art-historical analysis of the laws, of
a mutual rapprochement and disseverance of the means
of expression and of représentation, it follows that
a possibility of their synthesis is conditioned by
their morphological affinity, position within the systém
of spatial arts and functional nonidentity, a bifun-
ctional character of architecture and a polyfunctional
nature of sculpture. Synthesis is then achieved as: 1.
internai synthesis — proceeds within the boundaries
of a single work (as sculpturalization of architecture
and architecturalization of sculpture, of a statue) the
morphological and functional nonidentity coming mu-
tually doser together and fusing (new types ensue —
e.g. memorial and monument) ; 2. external synthesis —

assumes relevancy of at least two morphologically and
functionally nonidentical, receding éléments; a statue
is a physical, structural or free, spatial part of archi-
tecture.
Co-operation between architecture and sculpture on
early evolutional degrees leads to an even diametrally
opposite development of architecture of the 20^ Cen-
tury with an altered relationship to créative types.
Since the beginning of a mutual négation, through
co-operation, it tends towards a synthesis of architec-
tonie and plastic logic on a new compositional and
spatial base. The contemporary model of co-operation
incorporâtes a deepening of the process of internai and
external synthesis:
1. The statue becomes set off from the architecture,
thus giving rise to an exterior effigy which a) impres-
ses as an autonomous créative structure which analo-
gously corresponds in from, matter, composition and
space with the architecture; b) Works with opposing,
contrasting means, incompatible, incongruous with
architecture, as its morphologie, material, spatial anti-
thesis. Architecture and sculpture are integrated on the
basis of an équivalent relationship that incorporâtes
elemenfs of mutual co-ordination and subordination,
dominants and subdominants.
2. Sculpture is a physical part of architecture, its
relations are built up on the principle of structure —
again — as analogy and as opposition (e.g. relief or
a free statue as part of a façade or a wall — in view
of the new technological possibilities and greater ré-
miniscences of the past, this type is encountered less
frequently).
Synthesis of art is an évaluative, a qualitative and
a philosophical (Weltanschauung type) concept: we may
designate as a synthetic Creative work only that com-
plex which comprehensively and uniquely évaluâtes,
expresses and embodies a systém of mutural relations
from the detail to the whole and, where each Cre-
ative species-morphological and synthetic element
makes up an indivisible morphological and ideational
unit.