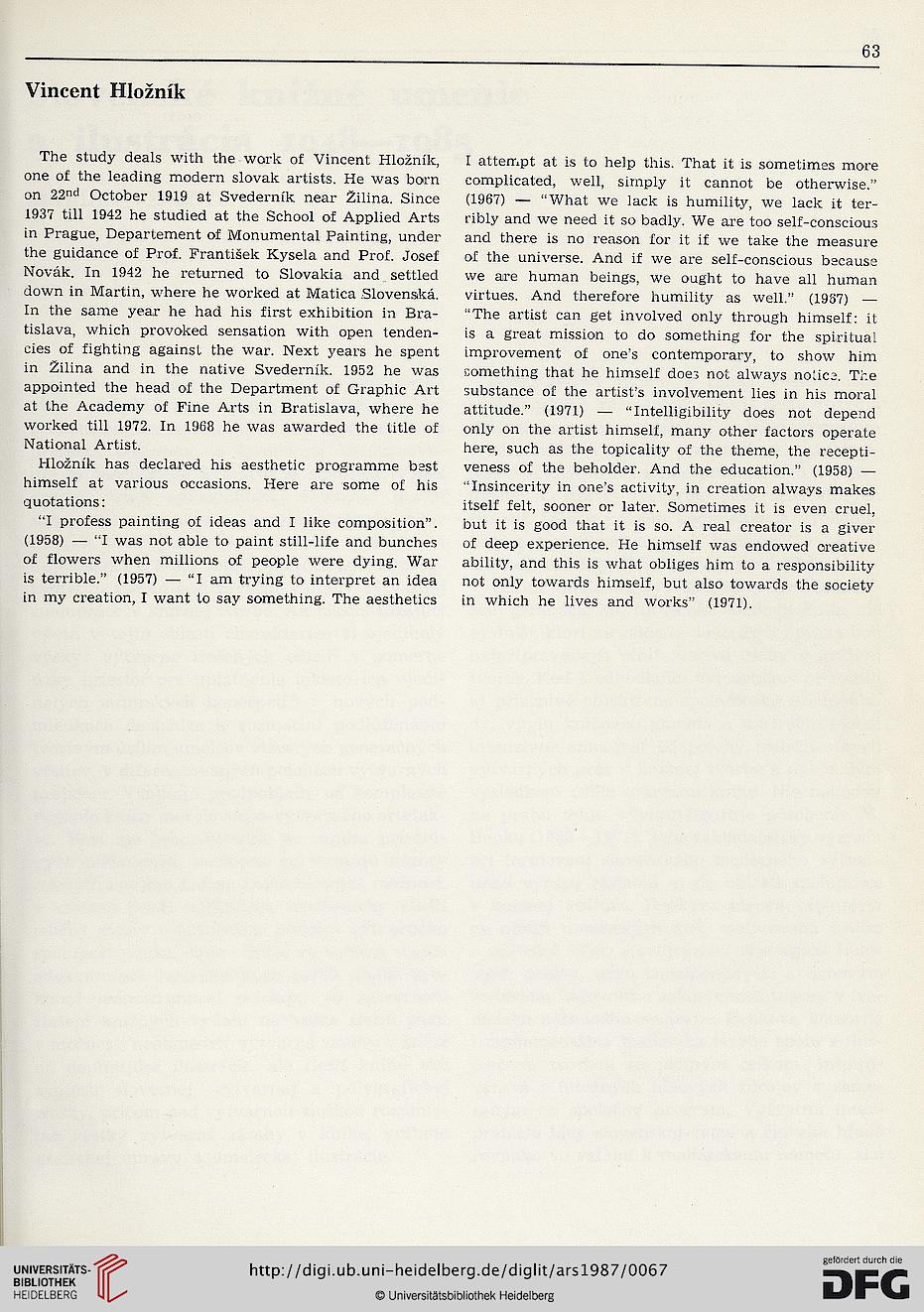 The study deals with the wark of Vincent Hiožník,
one of the leading modern slovak artists. He was born
on 22"d October 1919 at Svederník near Žilina. Since
1937 tili 1942 he studied at the School of Applied Arts
in Prague, Departement of Monumental Painting, under
the guidance of Prof. František Kysela and Prof. Josef
Novák. In 1942 he returned to Slovakia and settled
down in Martin, where he worked at Matica Slovenská,
ln the same year he had his first exhibition in Bra-
tislava, which provoked sensation with open tenden-
cies of fighting against the war. Next years he spent
in Žilina and in the native Svederník. 1952 he was
appointed the head of the Department of Graphic Art
at the Academy of Fine Arts in Bratislava, where he
worked tili 1972. In 1968 he was awarded the title of
National Artist.
Hiožník has declared his aesthetic programme bašt
himself at various occasions. Here are some of his
quotations:
"I profess painting of ideas and I like composition".
(1958) — 'J was not able to paint still-life and bunches
of flowers when millions of people were dying. War
is terrible." (1957) — "I am trying to interpret an idea
in my création, I want to say something. The aesthetics

I attempt at is to help this. That it is sometimes more
complicated, well, simply it cannot be otherwise."
(1967) — "What we lack is humility, we lack it ter-
ribly and we need it so badly. We are too self-conscious
and there is no reason for it if we take the measure
of the universe. And if we are self-conscious because
we are human beings, we ought to have all human
virtues. And therefore humility as well." (1987) —
"The artist can get involved only through himself: it
is a great mission to do something for the spirituai
improvement of one's Contemporary, to show him
comething that he himself does not always notice. The
substance of the artist's involvement lies in his moral
attitude." (1971) — "Intelligibility does not dépend
only on the artist himself, many other factors operáte
here, such as the topicality of the theme, the recepti-
veness of the beholder. And the éducation." (1958) —
"Insincerity in one's activity, in création always makes
itself feit, sooner or later. Sometimes it is even cruel,
but it is good that it is so. A real creator is a giver
of deep experience. He himself was endowed Creative
ability, and this is what obliges him to a responsibility
not only towards himself, but also towards the society
in which he lives and Works" (1971).