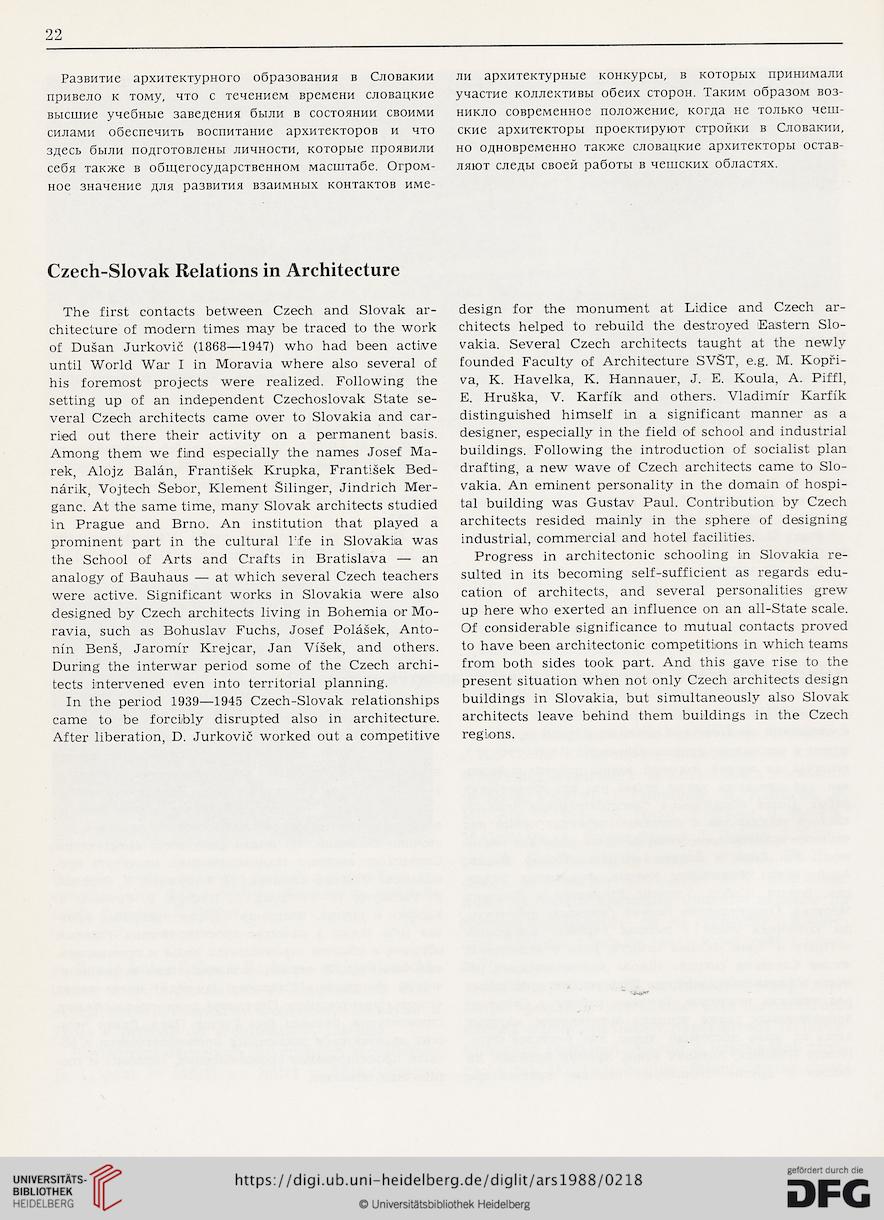 The first contacts between Czech and Slovák ar-
chitecture of modem times may be traced to the work
of Dušan Jurkovič (1868—1947) who had been active
until World War I in Moravia where also several of
his foremost projects were realized. Following the
setting up of an independent Czechoslovak State se-
veral Czech architects came over to Slovakia and car-
ried out there their activity on a permanent basis.
Among them we find especially the names Josef Ma-
rek, Alojz Balán, František Krupka, František Bed-
nárik, Vojtech Šebor, Klement Šilinger, Jindřich Mer-
ganc. At the same time, many Slovák architects studied
in Prague and Brno. An institution that played a
prominent part in the cultural Tře in Slovakiia was
the School of Arts and Crafts in Bratislava — an
analogy of Bauhaus — at which several Czech teachers
were active. Significant works in Slovakia were also
designed by Czech architects living in Bohemia or Mo-
ravia, such as Bohuslav Fuchs, Josef Polášek, Anto-
nín Benš, Jaromír Krejcar, Jan Víšek, and others.
During the interwar period some of the Czech archi-
tects intervened even into territorial planning.
In the period 1939—1945 Czech-Slovak relationships
came to be forcibly disrupted also in architecture.
After libération, D. Jurkovič worked out a compétitive

design for the monument at Lidice and Czech ar-
chitects helped to rebuild the destroyed Eastem Slo-
vakia. Several Czech architects taught at the newly
founded Faculty of Architecture SVST, e.g. M. Kopři-
va, K. Havelka, K. Hannauer, J. E. Koula, A. Piffl,
E. Hruška, V. Karfik and others. Vladimir Karfik
distinguished himself in a significant männer as a
designer, especially in the field of school and industrial
buildings. Following the introduction of socialist plan
drafting, a new wave of Czech architects came to Slo-
vakia. An eminent personality in the domain of hospi-
tal building was Gustav Paul. Contribution by Czech
architects resided mainly in the sphere of designing
industrial, commercial and hotel facilities.
Progress in architectonie schooling in Slovakia re-
sulted in its becoming self-sufficient as regards édu-
cation of architects, and several Personalities grew
up here who exerted an influence on an all-State scale.
Of considérable significance to mutual contacts proved
to háve been architectonie compétitions in which teams
from both sides took part. And this gave rise to the
present situation when not only Czech architects design
buildings in Slovakia, but simultaneously also Slovák
architects leave behind them buildings in the Czech
régions.