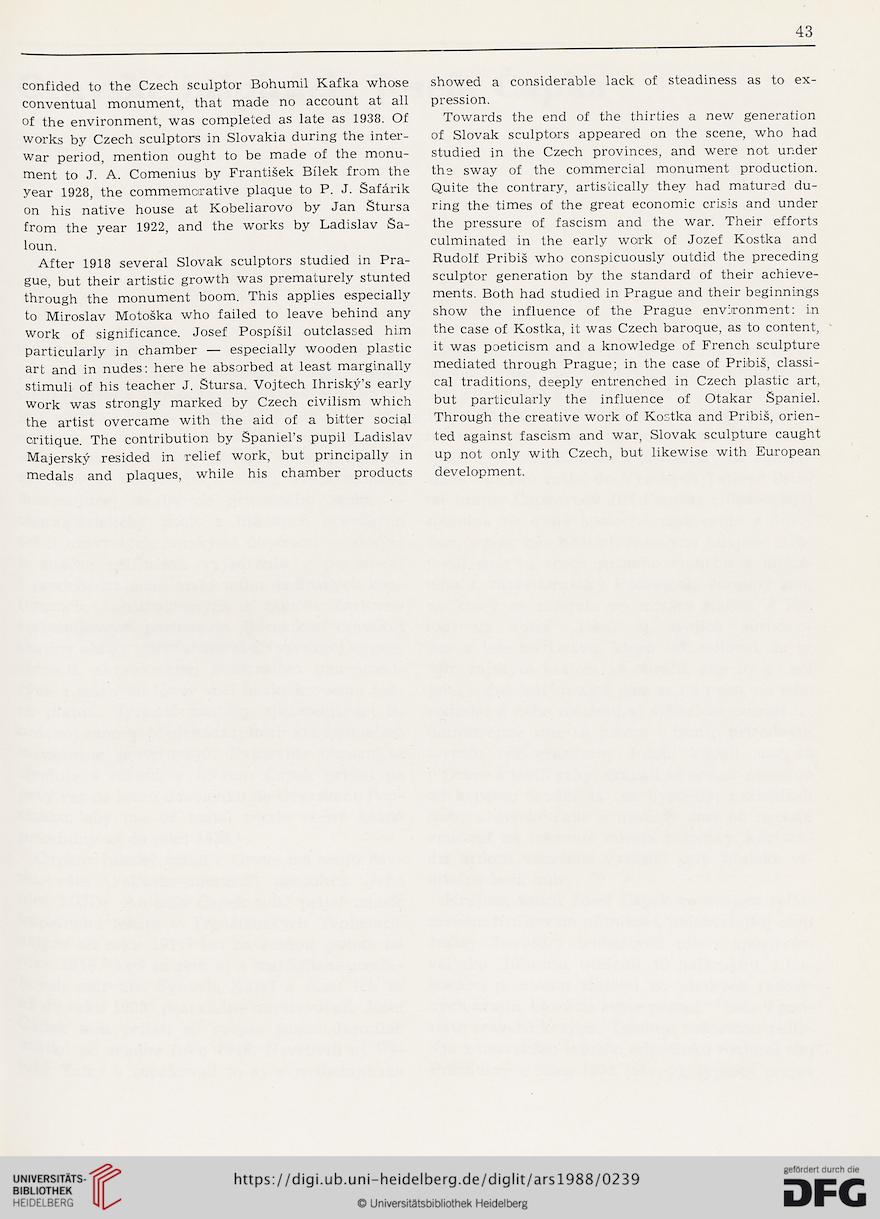 confided to the Czech sculptor Bohumil Kafka whose
conventual monument, that made no account at all
of the environment, was completed as late as 1938. Of
Works by Czech sculptons in Slovakia during the inter-
war period, mention ought to be made of the monu-
ment to J. A. Comenius by František Bílek from the
year 1928, the commémorative plaque to P. J. Safârik
on his native house at Kobeliarovo by Jan Stursa
from the year 1922, and the Works by Ladislav Sa-
loun.
After 1918 several Slovák sculptors studied in Pra-
gue, but their artistic growth was prematurely stunted
through the monument boom. This applies especially
to Miroslav Motoška who failed to leave behind any
Work of significance. Josef Pospíšil outclassed him
particularly in chamber — especially wooden plastic
art and in nudes: here he absorbed at least marginally
Stimuli of his teacher J. Stursa. Vojtech Ihriskÿ’s early
Work was strongly marked by Czech civilism which
the artist overcame with the aid of a bitter social
critique. The contribution by Spaniers pupil Ladislav
Majerský resided in relief work, but principally in
medals and plaques, while his chamber products

showed a considérable lack of steadiness as to ex-
pression.
Towards the end of the thirties a new génération
of Slovák sculptors appeared on the scene, who had
studied in the Czech provinces, and were not under
the sway of the commercial monument production.
Quite the contrary, artistically they had matured du-
ring the times of the great économie crisis and under
the pressure of fascism and the war. Their efforts
culminated in the early work of Jozef Kostka and
Rudolf Pribiš who conspicuously outdid the preceding
sculptor génération by the standard of their achieve-
ments. Both had studied in Prague and their beginnings
show the influence of the Prague environment: in
the case of Kostka, it was Czech baroque, as to content,
it was poeticism and a knowledge of French sculpture
mediated through Prague; in the case of Pribiš, classi-
cal traditions, deeply entrenched in Czech plastic art,
but particularly the influence of Otakar Španiel.
Through the créative work of Kostka and Pribiš, orien-
ted against fascism and war, Slovák sculpture caught
up not only with Czech, but likewise with European
development.