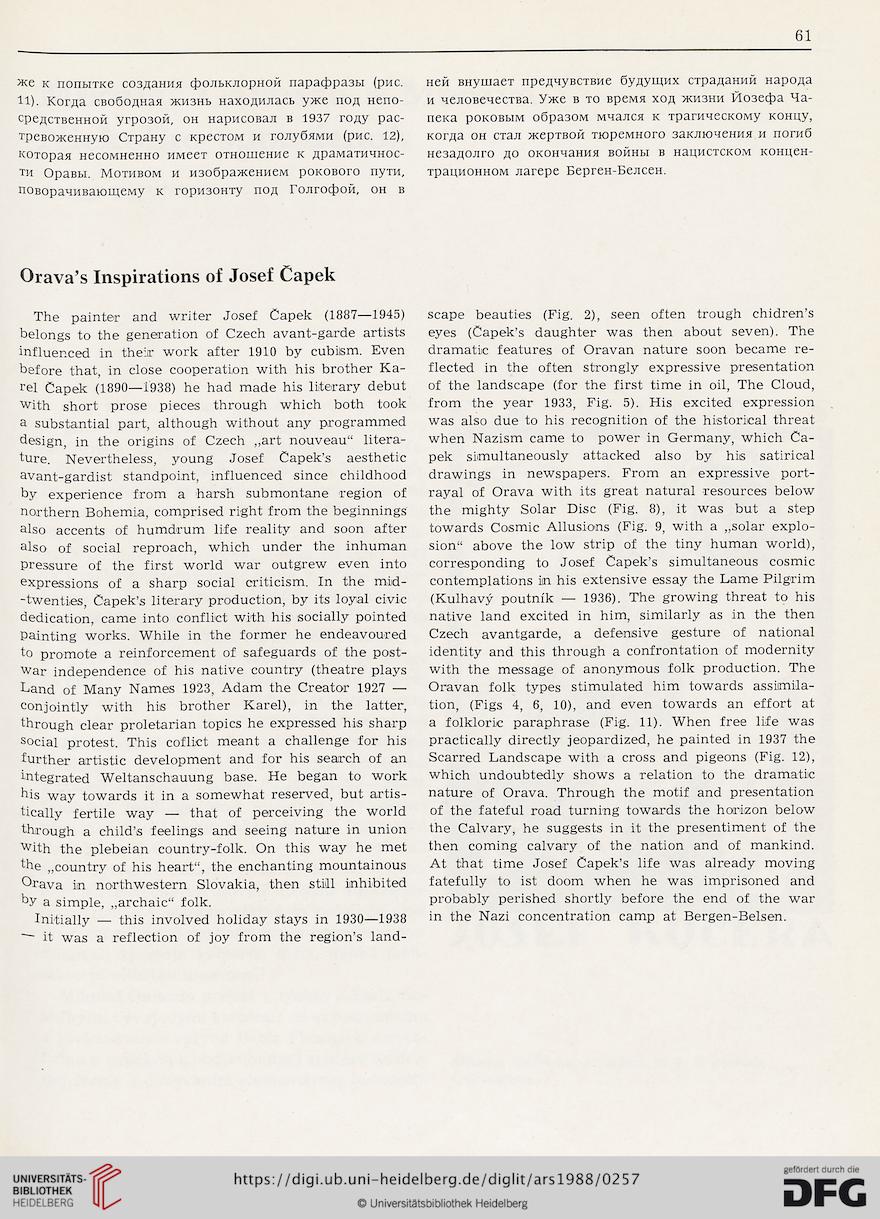 Orava’s Inspirations of Josef Capek
The painter and writer Josef Capek (1887—1945)
belongs to the génération of Czech avant-garde artists
influenced in their work after 1910 by cubiism. Even
before that, in close coopération with his brother Ka-
rel Capek (1890—1938) he had made his literary debut
with short prose pièces through which both took
a substantial part, although without any programmed
design, in the origins of Czech „art nouveau“ litera-
tuře. Nevertheless, young Josef Capek’s aesthetic
avant-gardist standpoint, influenced since childhood
by experience from a harsh submontane region of
northern Bohemia, comprised right from the beginnings
also accents of humdrum life reality and soon after
also of social reproach, which under the inhuman
Pressure of the first world war outgrew even into
expressions of a Sharp social criticism. In the mi<d-
-twenties, Capek’s literary production, by its loyal civíc
dedication, came into conflict with his socially pointed
Painting works. While in the former he endeavoured
to promote a reinforcement of safeguards of the post-
War independence of his native country (theatre plays
Land of Many Names 1923, Adam the Creator 1927 —
conjointly with his brother Karel), in the latter,
through clear proletarian topics he expressed his sharp
social protest. This coflict meant a challenge for his
further artistic development and for his search of an
integrated Weltanschauung base. He began to work
his way towards it in a somewhat reserved, but artis-
tically fertile way — that of perceiving the world
through a chilďs feelings and seeing nature in union
With the plebeian country-folk. On this way he met
the „country of his heart“, the enchanting mountainous
Orava in northwestern Slovakia, then still inhibited
by a simple, „archaic“ folk.
Initially — this involved holiday stays in 1930—1938
it was a reflection of joy from the region’s land-

scape beauties (Fig. 2), seen often trough chidren’s
eyes (Capek’s daughter was then about seven). The
dramatic features of Oráván nature soon became re-
flected in the often strongly expressive présentation
of the landscape (for the first time in oil, The Cloud,
from the year 1933, Fig. 5). His excited expression
was also due to his récognition of the historical threat
when Nazism came to power in Germany, which Ca-
pek simultaneously attacked also by his satirical
drawings in newspapers. From an expressive port-
rayal of Orava with its great natural resources below
the mighty Solar Disc (Fig. 8), it was but a step
towards Cosmic Allusions (Fig. 9, with a „solar explo-
sion“ above the low strip of the tiny human world),
corresponding to Josef Capek’s simultaneous cosmic
contemplations in his extensive essay the Lame Pilgrim
(Kulhavý poutník — 1936). The growing threat to his
native land excited in him, similarly as in the then
Czech avantgardě, a defensive gesture of national
identity and this through a confrontation of modernity
with the message of anonymous folk production. The
Oravan folk types stimulated him towards assimila-
tion, (Figs 4, 6, 10), and even towards an effort at
a folkloric paraphrase (Fig. 11). When free life was
practically directly jeopardized, he painted in 1937 the
Scarred Landscape with a cross and pigeons (Fig. 12),
which undoubtedly shows a relation to the dramatic
nature of Orava. Through the motif and présentation
of the fateful road turning towards the horizon below
the Calvary, he suggests in it the presentiment of the
then coming calvary of the nation and of mankind.
At that time Josef Capek’s life was already moving
fatefully to ist doom when he was imprisoned and
probably perished shortly before the end of the war
in the Nazi concentration camp at Bergen-Belsen.