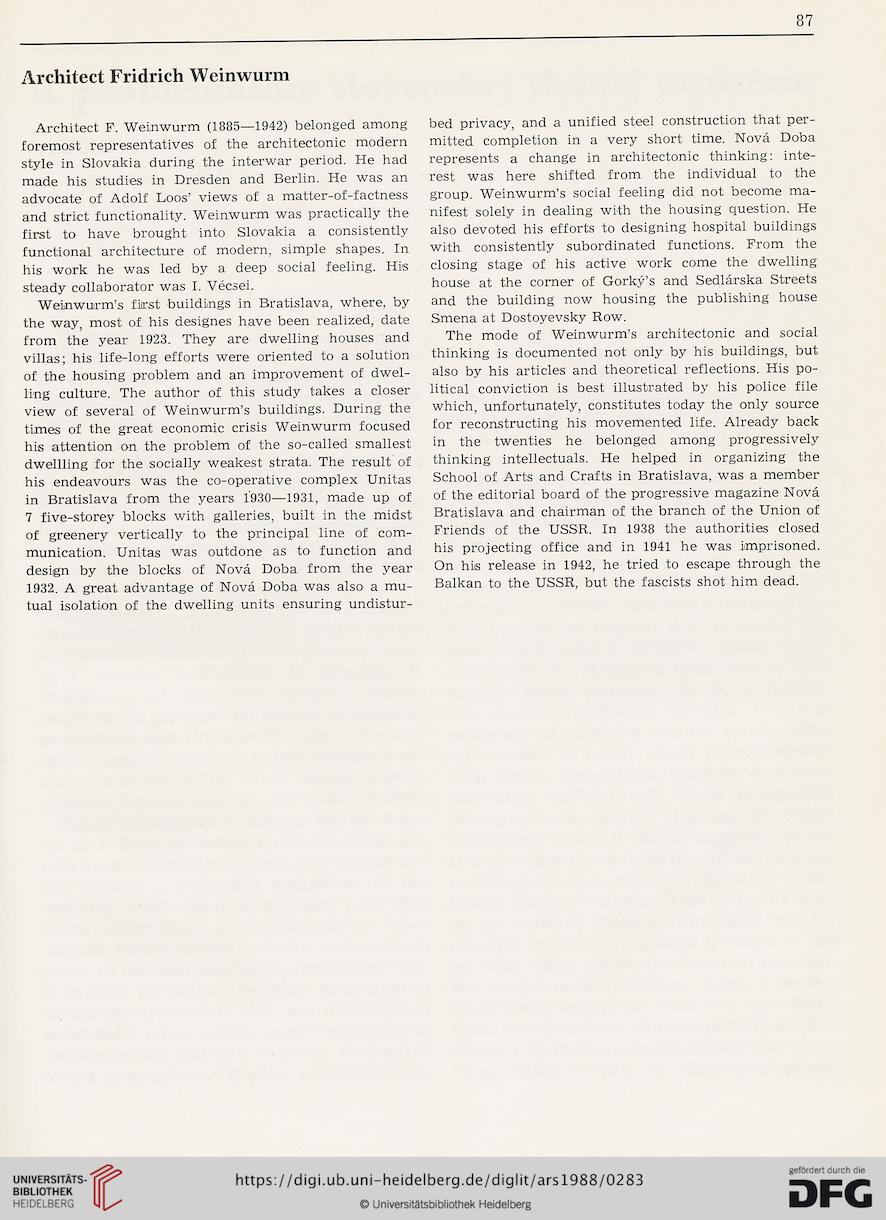 Architect F. Weinwurm (1885—1942) belonged among
foremost représentatives of the architectonie modern
style in Slovakia during the interwar period. He had
made his studies in Dresden and Berlin. He was an
advocate of Adolf Loos’ views of a matter-of-factness
and strict functionality. Weinwurm was practically the
first to have brought into Slovakia a consistently
functional architecture of modern, simple shapes. In
his work he was led by a deep social feeling. His
steady collaborator was I. Vécsei.
Weinwurm’s first buildings in Bratislava, where, by
the way, most of his désignés have been realized, date
from the year 1923. They are dwelling houses and
villas; his life-long efforts were oriented to a solution
of the housing problém and an improvement of dwel-
ling culture. The author of this study takés a closer
view of several of Weinwurm’s buildings. During the
times of the great économie crisis Weinwurm focused
his attention on the problém of the so-called smallest
dwellling for the socially weakest strata. The result of
his endeavours was the co-operative complex Unitas
in Bratislava from the years 1930—1931, made up of
7 five-storey blocks with galleries, built in the midst
of greenery vertically to the principal line of com-
munication. Unitas was outdone as to function and
design by the blocks of Nová Doba from the year
1932. A great advantage of Nová Doba was also a mu-
tual isolation of the dwelling units ensuring undistur-

bed privacy, and a unified steel construction that per-
mitted completion in a very short time. Nová Doba
represents a change in architectonie thinking: inte-
rest was here shifted from the individual to the
group. Weinwurm’s social feeling did not become ma-
nifest solely in dealing with the housing question. He
also devoted his efforts to designing hospital buildings
with consistently subordinated functions. From the
closing stage of his active work come the dwelling
house at the corner of Gorký’s and Sedlářská Streets
and the building now housing the Publishing house
Směna at Dostoyevsky Row.
The mode of Weinwurm’s architectonie and social
thinking is documented not only by his buildings, but
also by his articles and theoretical reflections. His po-
litical conviction is best illustrated by his police file
which, unfortunately, constitutes today the only source
for reconstructing his movemented life. Already back
in the twenties he belonged among progressively
thinking intellectuals. He helped in organizing the
School of Arts and Crafts in Bratislava, was a member
of the éditorial board of the progressive magazine Nová
Bratislava and chairman of the branch of the Union of
Friends of the USSR. In 1938 the authorities closed
his projecting office and in 1941 he was imprisoned.
On his release in 1942, he tried to escape through the
Balkan to the USSR, but the fascists shot him dead.