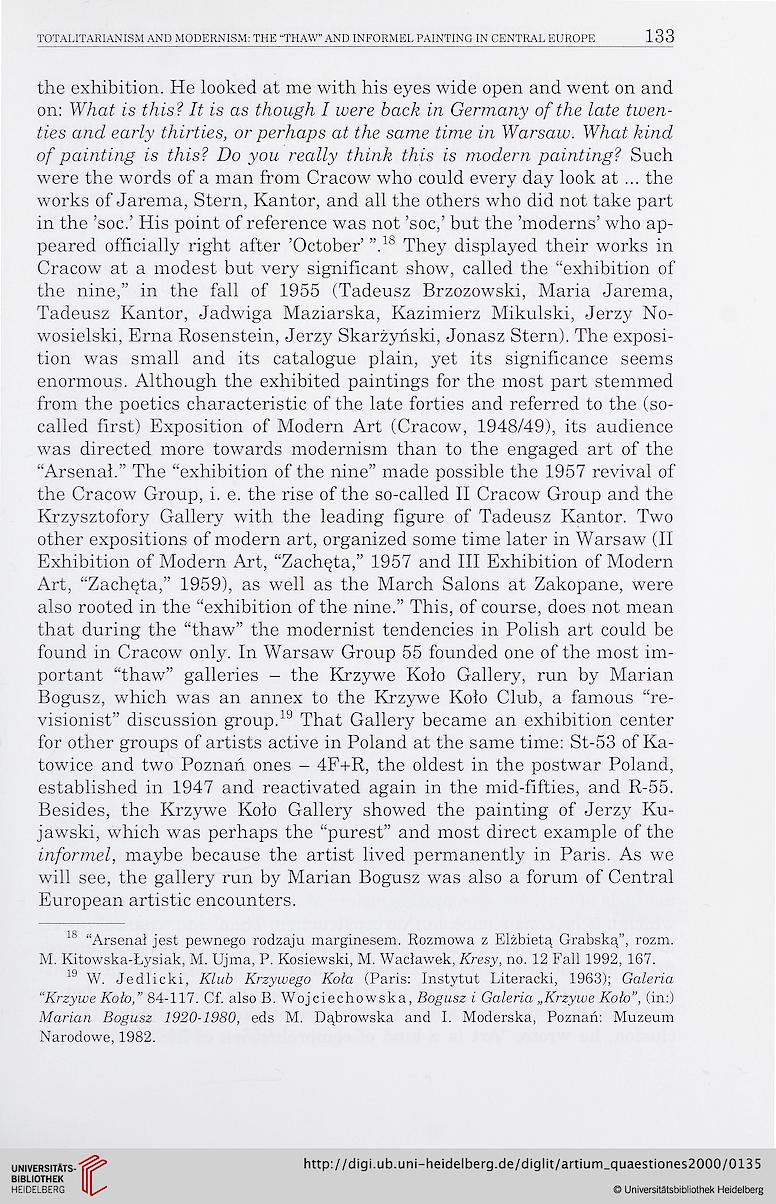 the exhibition. He looked at me with his eyes wide open and went on and
on: What is this? It is as though I were back in Germany of the late twen-
ties and early thirties, or' perhaps at the same time in Warsaw. What kind
of painting is this? Do y ou really think this is modem painting? Such
were the words of a man from Cracow who could every day look at ... the
works of Jarema, Stern, Kantor, and ail the others who did not take part
in the ’soc.’ His point of reference was not ’soc,’ but the ’moderns’ who ap-
peared officially right after ’October’ ”.1S They displayed their works in
Cracow at a modest but very signifïcant show, called the “exhibition of
the nine,” in the fall of 1955 (Tadeusz Brzozowski, Maria Jarema,
Tadeusz Kantor, Jadwiga Maziarska, Kazimierz Mikulski, Jerzy No-
wosielski, Erna Rosenstein, Jerzy Skarzynski, Jonasz Stern). The exposi-
tion was small and its catalogue plain, yet its signifïcance seems
enormous. Al though the exhibited paintings for the most part stemmed
from the poetics characteristic of the late forties and referred to the (so-
called flrst) Exposition of Modem Art (Cracow, 1948/49), its audience
was directed more towards modernism than to the engaged art of the
“Arsenal.” The “exhibition of the nine” made possible the 1957 revival of
the Cracow Group, i. e. the rise of the so-called II Cracow Group and the
Krzysztofory Gallery with the leading figure of Tadeusz Kantor. Two
other expositions of modem art, organized some time later in Warsaw (II
Exhibition of Modem Art, “Zachçta,” 1957 and III Exhibition of Modem
Art, “Zachgta,” 1959), as well as the March Salons at Zakopane, were
also rooted in the “exhibition of the nine.” This, of course, does not mean
that during the “thaw” the modernist tendencies in Polish art could be
found in Cracow only. In Warsaw Group 55 founded one of the most im-
portant “thaw” galleries - the Krzywe Kolo Gallery, run by Marian
Bogusz, which was an annex to the Krzywe Kolo Club, a famous “re-
visionist” discussion group.18 19 That Gallery became an exhibition center
for other groups of artists active in Poland at the same time: St-53 of Ka-
towice and two Poznan ones - 4F+R, the oldest in the postwar Poland,
established in 1947 and reactivated again in the mid-fifties, and R-55.
Besides, the Krzywe Kolo Gallery showed the painting of Jerzy Ku-
jawski, which was perhaps the “purest” and most direct example of the
informel, maybe because the artist lived permanently in Paris. As we
will see, the gallery run by Marian Bogusz was also a forum of Central
European artistic encounters.