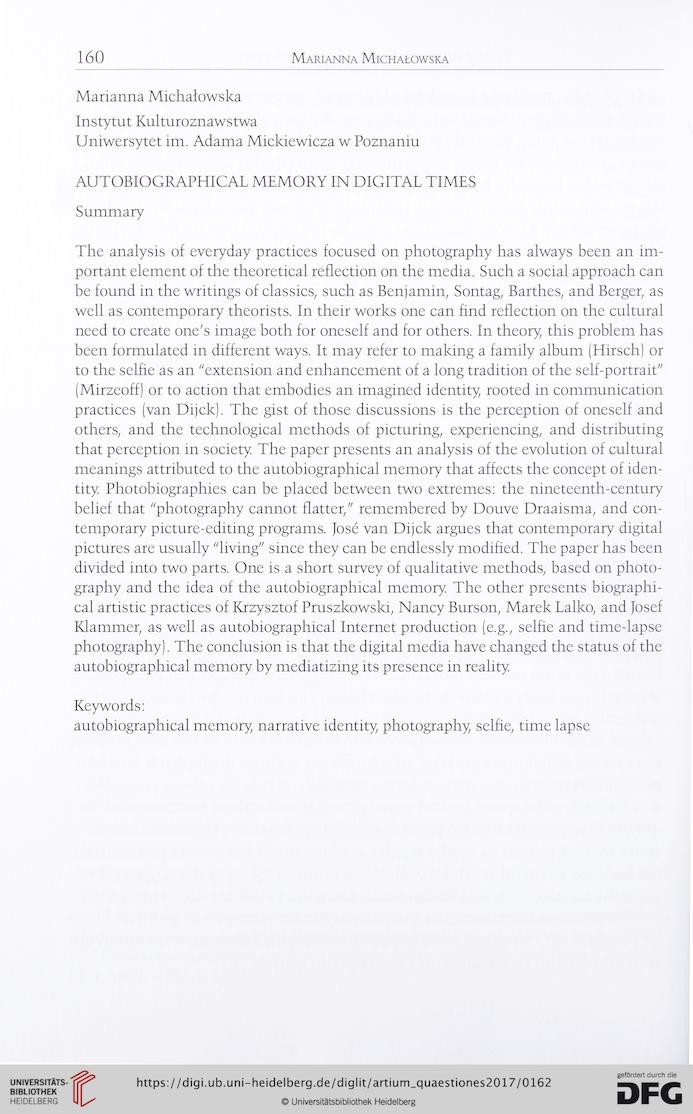 Marianna Michałowska
Instytut Kulturoznawstwa
Uniwersytet im. Adama Mickiewicza w Poznaniu
AUTOBIOGRAPHICAL MEMORY IN DIGITAL TIMES
Summary
The analysis of everyday practices focused on photography has always been an im-
portant element of the theoretical reflection on the media. Such a social approach can
be found in the writings of classics, such as Benjamin, Sontag, Barthes, and Berger, as
well as contemporary theorists. In their works one can find reflection on the cultural
need to create one's image both for oneself and for others. In theory this problem has
been formulated in different ways. It may refer to making a family album (Hirsch) or
to the seihe as an "extension and enhancement of a long tradition of the self-portrait"
(Mirzeoff) or to action that embodies an imagined identity rooted in communication
practices (van Dijck). The gist of those discussions is the perception of oneself and
others, and the technological methods of picturing, experiencing, and distributing
that perception in society The paper presents an analysis of the evolution of cultural
meanings attributed to the autobiographical memory that affects the concept of iden-
tity. Photobiographies can be placed between two extremes: the nineteenth-century
belief that "photography cannot flatter," remembered by Douve Draaisma, and con-
temporary picture-editing programs. José van Dijck argues that contemporary digital
pictures are usually "living" since they can be endlessly modified. The paper has been
divided into two parts. One is a short survey of qualitative methods, based on photo-
graphy and the idea of the autobiographical memory. The other presents biographi-
cal artistic practices of Krzysztof Pruszkowski, Nancy Burson, Marek Lalko, and Josef
Klammer, as well as autobiographical Internet production (e.g., seihe and time-lapse
photography). The conclusion is that the digital media have changed the status of the
autobiographical memory by mediatizing its presence in reality
Keywords:
autobiographical memory, narrative identity photography seihe, time lapse