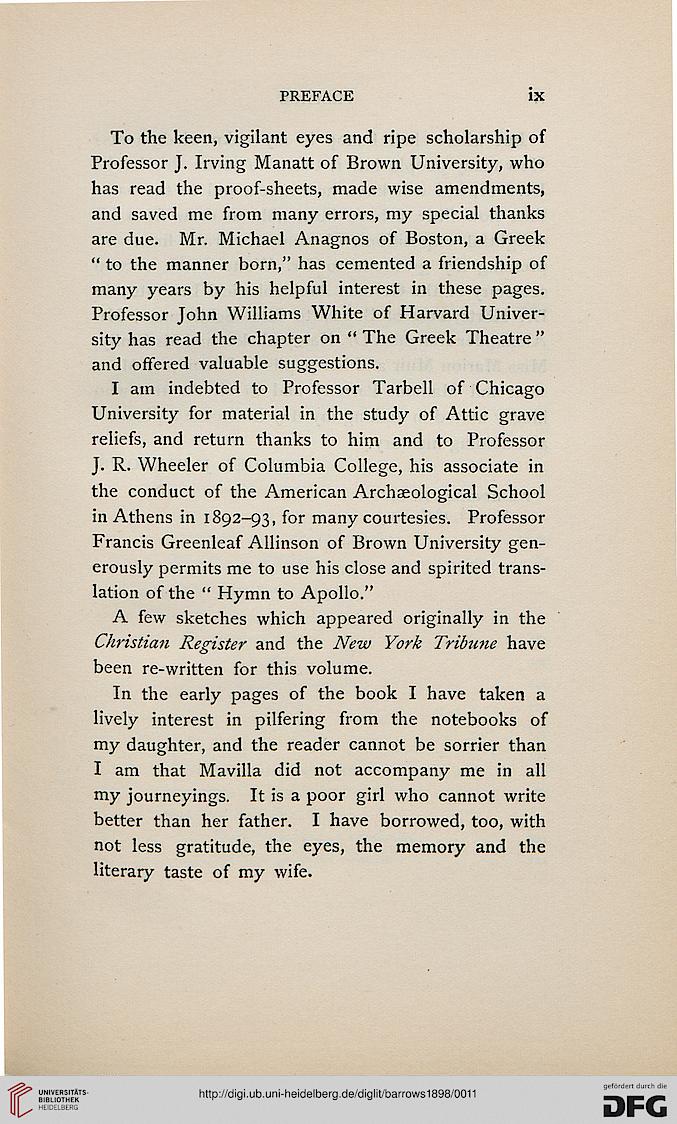 To the keen, vigilant eyes and ripe scholarship of
Professor J. Irving Manatt of Brown University, who
has read the proof-sheets, made wise amendments,
and saved me from many errors, my special thanks
are due. Mr. Michael Anagnos of Boston, a Greek
" to the manner born," has cemented a friendship of
many years by his helpful interest in these pages.
Professor John Williams White of Harvard Univer-
sity has read the chapter on " The Greek Theatre "
and offered valuable suggestions.

I am indebted to Professor Tarbell of Chicago
University for material in the study of Attic grave
reliefs, and return thanks to him and to Professor
J. R. Wheeler of Columbia College, his associate in
the conduct of the American Archaeological School
in Athens in 1892-93, for many courtesies. Professor
Francis Greenleaf Allinson of Brown University gen-
erously permits me to use his close and spirited trans-
lation of the " Hymn to Apollo."

A few sketches which appeared originally in the
Christian Register and the New York Tribune have
been re-written for this volume.

In the early pages of the book I have taken a
lively interest in pilfering from the notebooks of
my daughter, and the reader cannot be sorrier than
I am that Mavilla did not accompany me in all
my journeyings. It is a poor girl who cannot write
better than her father. I have borrowed, too, with
not less gratitude, the eyes, the memory and the
literary taste of my wife.