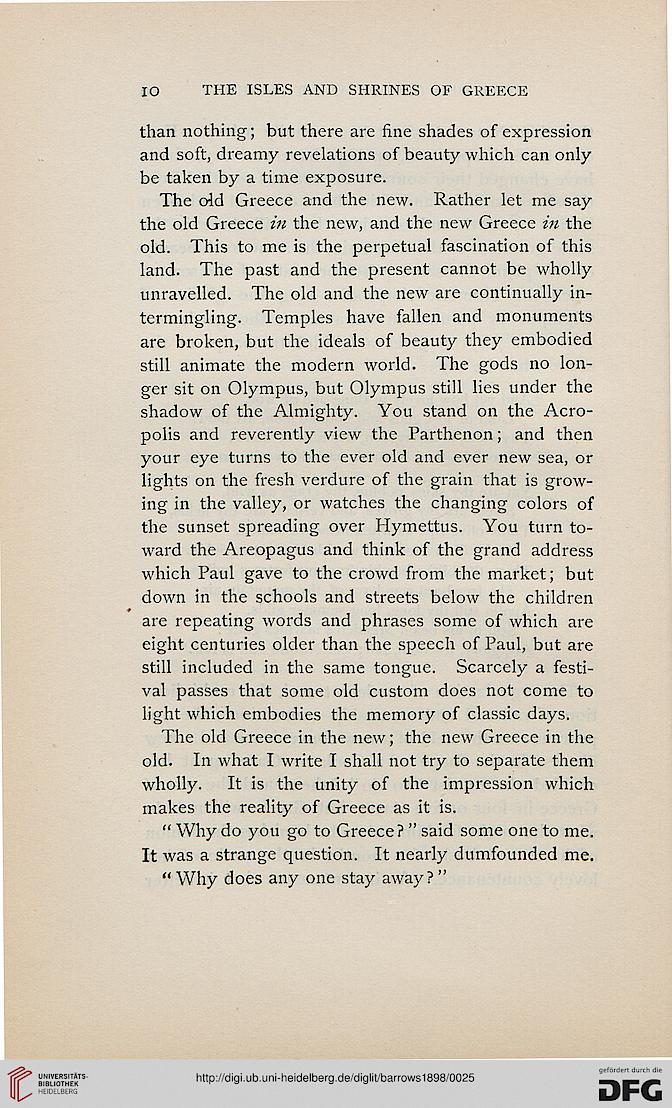 Information about OCR text
IO THE ISLES AND SHRINES OF GREECE

than nothing; but there are fine shades of expression
and soft, dreamy revelations of beauty which can only
be taken by a time exposure.

The old Greece and the new. Rather let me say
the old Greece in the new, and the new Greece in the
old. This to me is the perpetual fascination of this
land. The past and the present cannot be wholly
unravelled. The old and the new are continually in-
termingling. Temples have fallen and monuments
are broken, but the ideals of beauty they embodied
still animate the modern world. The gods no lon-
ger sit on Olympus, but Olympus still lies under the
shadow of the Almighty. You stand on the Acro-
polis and reverently view the Parthenon; and then
your eye turns to the ever old and ever new sea, or
lights on the fresh verdure of the grain that is grow-
ing in the valley, or watches the changing colors of
the sunset spreading over Hymettus. You turn to-
ward the Areopagus and think of the grand address
which Paul gave to the crowd from the market; but
down in the schools and streets below the children
are repeating words and phrases some of which are
eight centuries older than the speech of Paul, but are
still included in the same tongue. Scarcely a festi-
val passes that some old custom does not come to
light which embodies the memory of classic days.

The old Greece in the new; the new Greece in the
old. In what I write I shall not try to separate them
wholly. It is the unity of the impression which
makes the reality of Greece as it is.

" Why do you go to Greece? " said some one to me.
It was a strange question. It nearly dumfounded me.