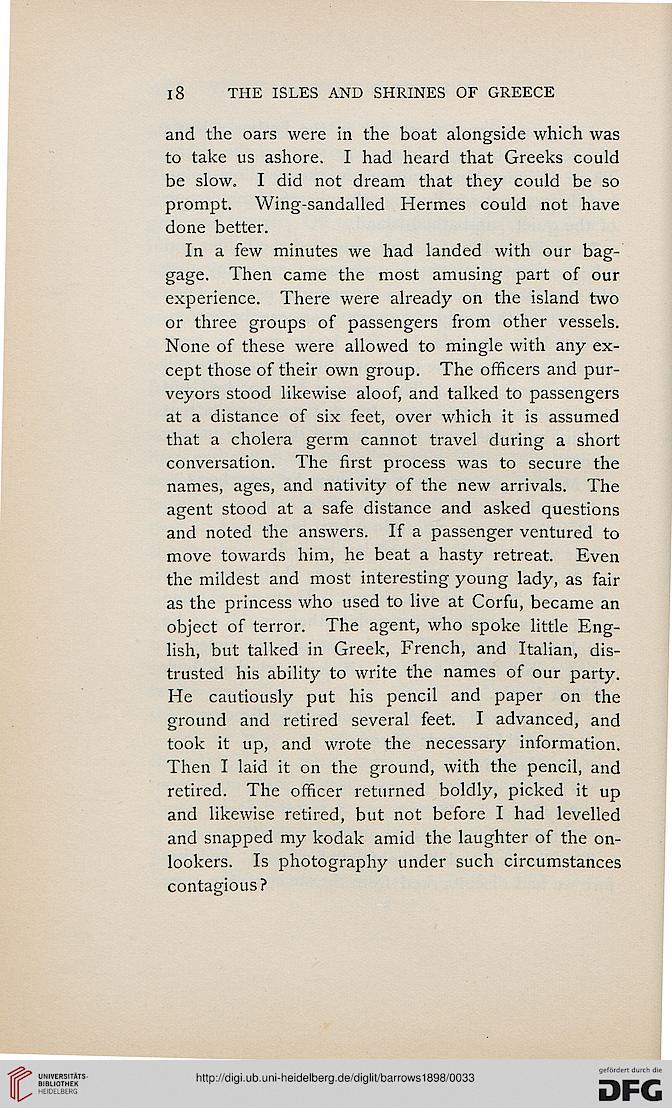 Information about OCR text
18 THE ISLES AND SHRINES OF GREECE

and the oars were in the boat alongside which was
to take us ashore, I had heard that Greeks could
be slow. I did not dream that they could be so
prompt. Wing-sandalled Hermes could not have
done better.

In a few minutes we had landed with our bag-
gage. Then came the most amusing part of our
experience. There were already on the island two
or three groups of passengers from other vessels.
None of these were allowed to mingle with any ex-
cept those of their own group. The officers and pur-
veyors stood likewise aloof, and talked to passengers
at a distance of six feet, over which it is assumed
that a cholera germ cannot travel during a short
conversation. The first process was to secure the
names, ages, and nativity of the new arrivals. The
agent stood at a safe distance and asked questions
and noted the answers. If a passenger ventured to
move towards him, he beat a hasty retreat. Even
the mildest and most interesting young lady, as fair
as the princess who used to live at Corfu, became an
object of terror. The agent, who spoke little Eng-
lish, but talked in Greek, French, and Italian, dis-
trusted his ability to write the names of our party.
He cautiously put his pencil and paper on the
ground and retired several feet. I advanced, and
took it up, and wrote the necessary information.
Then I laid it on the ground, with the pencil, and
retired. The officer returned boldly, picked it up
and likewise retired, but not before I had levelled
and snapped my kodak amid the laughter of the on-
lookers. Is photography under such circumstances
contagious?