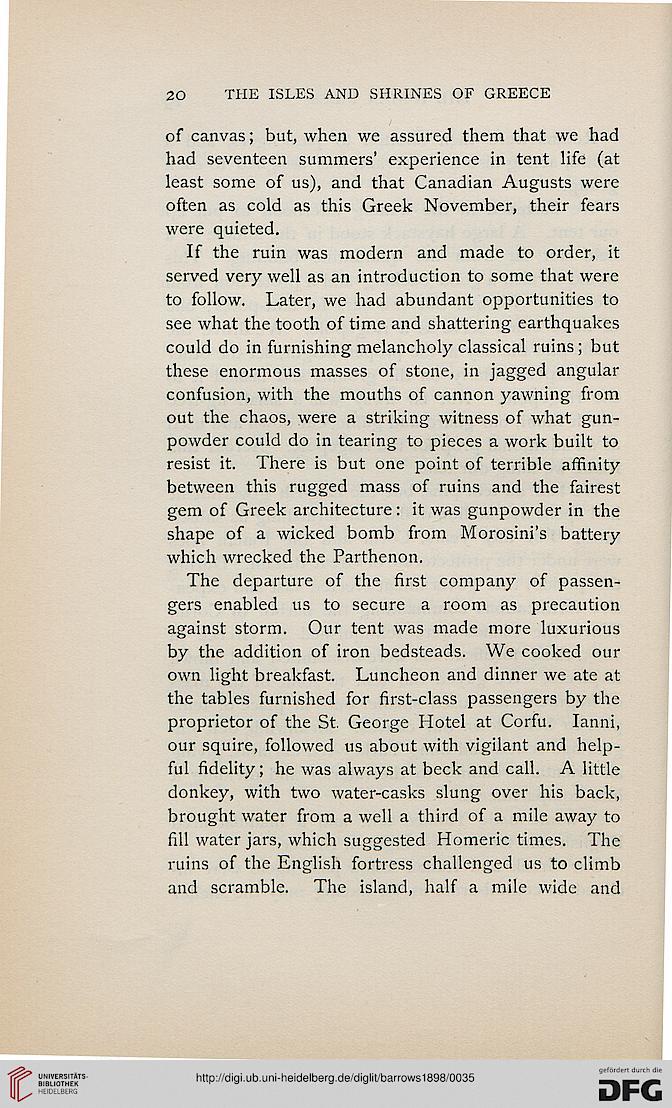 Information about OCR text
20 THE ISLES AND SHRINES OF GREECE

of canvas; but, when we assured them that we had
had seventeen summers' experience in tent life (at
least some of us), and that Canadian Augusts were
often as cold as this Greek November, their fears
were quieted.

If the ruin was modern and made to order, it
served very well as an introduction to some that were
to follow. Later, we had abundant opportunities to
see what the tooth of time and shattering earthquakes
could do in furnishing melancholy classical ruins; but
these enormous masses of stone, in jagged angular
confusion, with the mouths of cannon yawning from
out the chaos, were a striking witness of what gun-
powder could do in tearing to pieces a work built to
resist it. There is but one point of terrible affinity
between this rugged mass of ruins and the fairest
gem of Greek architecture: it was gunpowder in the
shape of a wicked bomb from Morosini's battery
which wrecked the Parthenon.

The departure of the first company of passen-
gers enabled us to secure a room as precaution
against storm. Our tent was made more luxurious
by the addition of iron bedsteads. We cooked our
own light breakfast. Luncheon and dinner we ate at
the tables furnished for first-class passengers by the
proprietor of the St. George Hotel at Corfu. Ianni,
our squire, followed us about with vigilant and help-
ful fidelity; he was always at beck and call. A little
donkey, with two water-casks slung over his back,
brought water from a well a third of a mile away to
fill water jars, which suggested Homeric times. The
ruins of the English fortress challenged us to climb
and scramble. The island, half a mile wide and