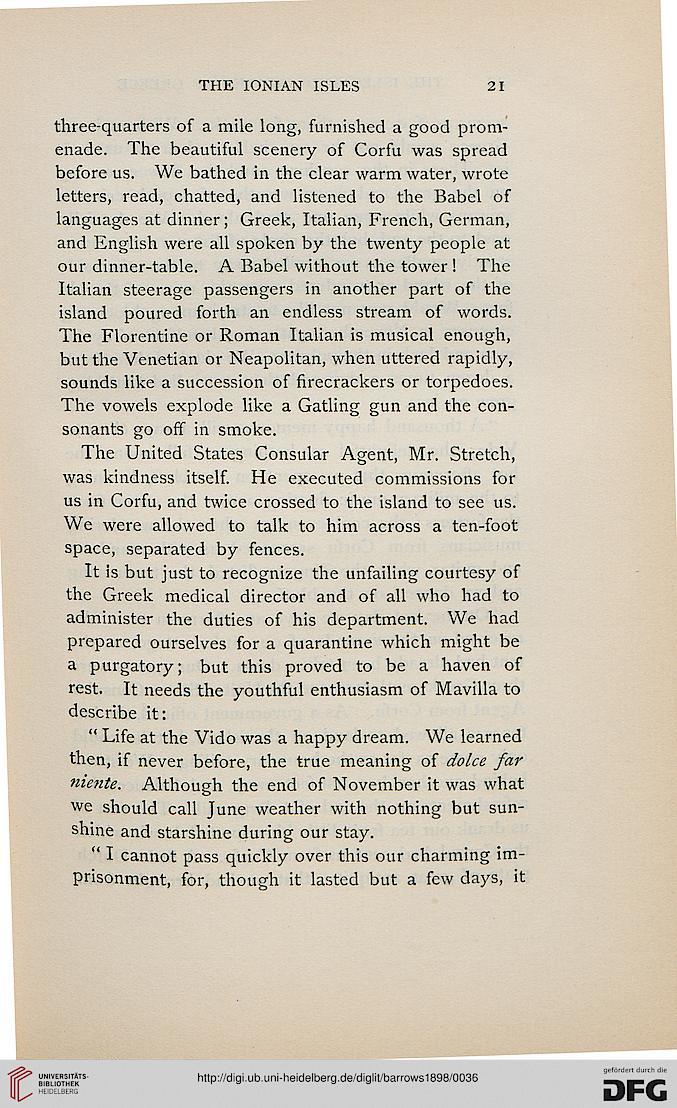 three-quarters of a mile long, furnished a good prom-
enade. The beautiful scenery of Corfu was spread
before us. We bathed in the clear warm water, wrote
letters, read, chatted, and listened to the Babel of
languages at dinner; Greek, Italian, French, German,
and English were all spoken by the twenty people at
our dinner-table. A Babel without the tower ! The
Italian steerage passengers in another part of the
island poured forth an endless stream of words.
The Florentine or Roman Italian is musical enough,
but the Venetian or Neapolitan, when uttered rapidly,
sounds like a succession of firecrackers or torpedoes.
The vowels explode like a Gatling gun and the con-
sonants go off in smoke.

The United States Consular Agent, Mr. Stretch,
was kindness itself. He executed commissions for
us in Corfu, and twice crossed to the island to see us.
We were allowed to talk to him across a ten-foot
space, separated by fences.

It is but just to recognize the unfailing courtesy of
the Greek medical director and of all who had to
administer the duties of his department. We had
prepared ourselves for a quarantine which might be
a purgatory; but this proved to be a haven of
rest. It needs the youthful enthusiasm of Mavilla to
describe it:

" Life at the Vido was a happy dream. We learned
then, if never before, the true meaning of dolce far
niente. Although the end of November it was what
we should call June weather with nothing but sun-
shine and starshine during our stay.

" I cannot pass quickly over this our charming im-
prisonment, for, though it lasted but a few days, it