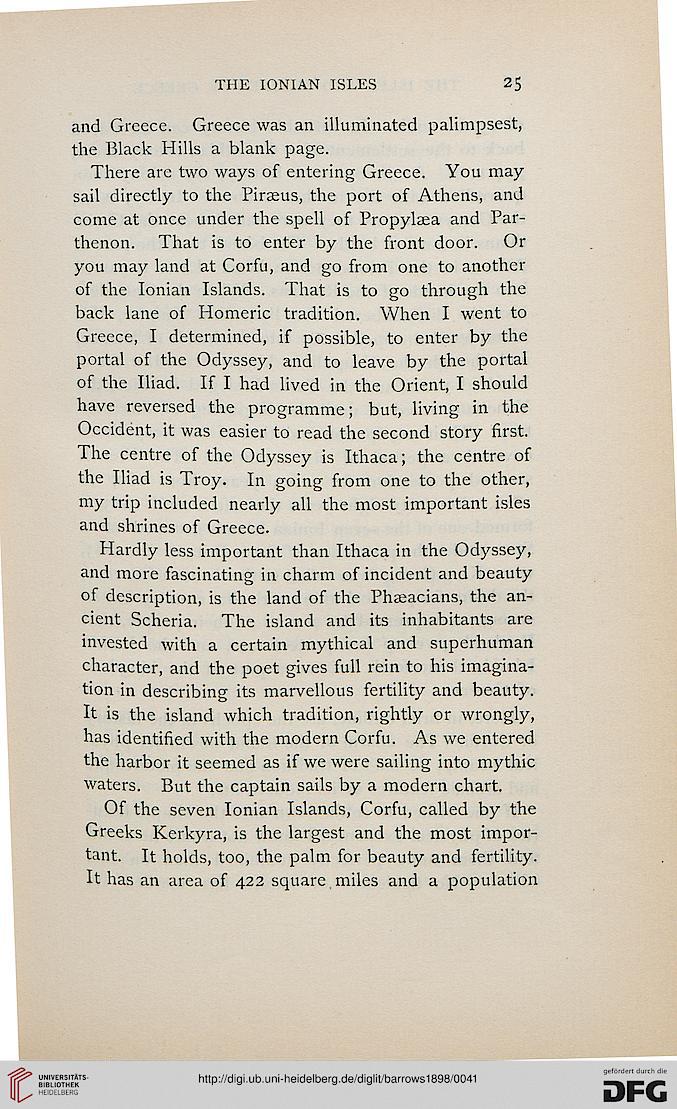 and Greece. Greece was an illuminated palimpsest,
the Black Hills a blank page.

There arc two ways of entering Greece. You may
sail directly to the Piraeus, the port of Athens, and
come at once under the spell of Propylaea and Par-
thenon. That is to enter by the front door. Or
you may land at Corfu, and go from one to another
of the Ionian Islands. That is to go through the
back lane of Homeric tradition. When I went to
Greece, I determined, if possible, to enter by the
portal of the Odyssey, and to leave by the portal
of the Iliad. If I had lived in the Orient, I should
have reversed the programme; but, living in the
Occident, it was easier to read the second story first.
The centre of the Odyssey is Ithaca; the centre of
the Iliad is Troy. In going from one to the other,
my trip included nearly all the most important isles
and shrines of Greece.

Hardly less important than Ithaca in the Odyssey,
and more fascinating in charm of incident and beauty
of description, is the land of the Phseacians, the an-
cient Scheria. The island and its inhabitants are
invested with a certain mythical and superhuman
character, and the poet gives full rein to his imagina-
tion in describing its marvellous fertility and beauty.
It is the island which tradition, rightly or wrongly,
has identified with the modern Corfu. As we entered
the harbor it seemed as if we were sailing into mythic
waters. But the captain sails by a modern chart.

Of the seven Ionian Islands, Corfu, called by the
Greeks Kerkyra, is the largest and the most impor-
tant. It holds, too, the palm for beauty and fertility.
It has an area of 422 square miles and a population