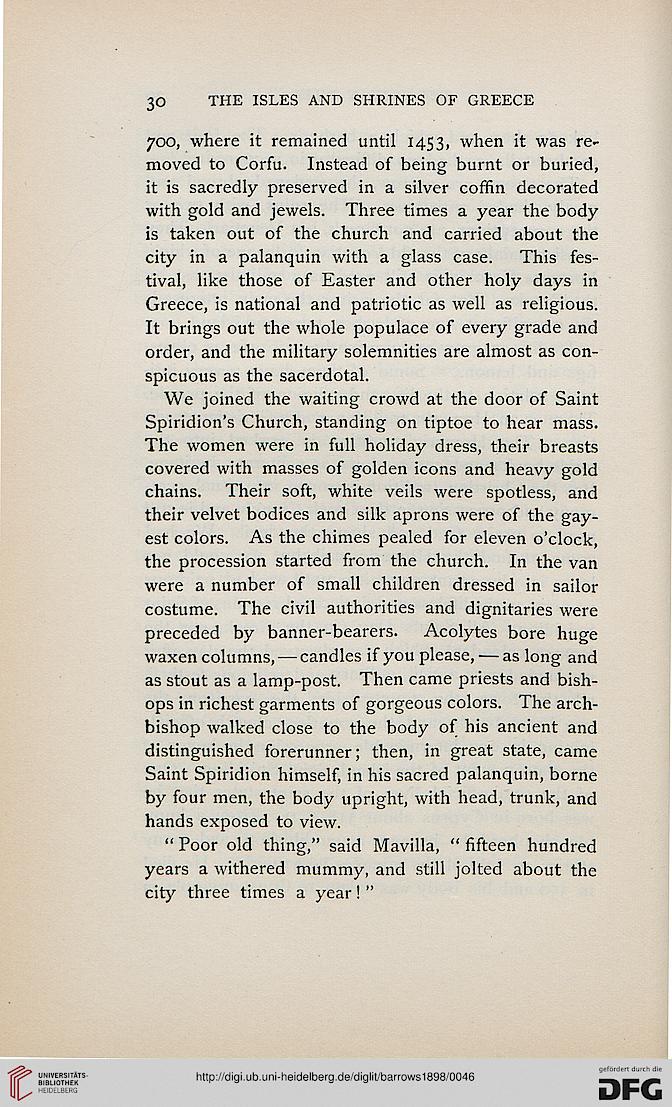 Information about OCR text
30 THE ISLES AND SHRINES OF GREECE

700, where it remained until 1453, when it was re-
moved to Corfu. Instead of being burnt or buried,
it is sacredly preserved in a silver coffin decorated
with gold and jewels. Three times a year the body
is taken out of the church and carried about the
city in a palanquin with a glass case. This fes-
tival, like those of Easter and other holy days in
Greece, is national and patriotic as well as religious.
It brings out the whole populace of every grade and
order, and the military solemnities are almost as con-
spicuous as the sacerdotal.

We joined the waiting crowd at the door of Saint
Spiridion's Church, standing on tiptoe to hear mass.
The women were in full holiday dress, their breasts
covered with masses of golden icons and heavy gold
chains. Their soft, white veils were spotless, and
their velvet bodices and silk aprons were of the gay-
est colors. As the chimes pealed for eleven o'clock,
the procession started from the church. In the van
were a number of small children dressed in sailor
costume. The civil authorities and dignitaries were
preceded by banner-bearers. Acolytes bore huge
waxen columns, — candles if you please, — as long and
as stout as a lamp-post. Then came priests and bish-
ops in richest garments of gorgeous colors. The arch-
bishop walked close to the body of his ancient and
distinguished forerunner; then, in great state, came
Saint Spiridion himself, in his sacred palanquin, borne
by four men, the body upright, with head, trunk, and
hands exposed to view.