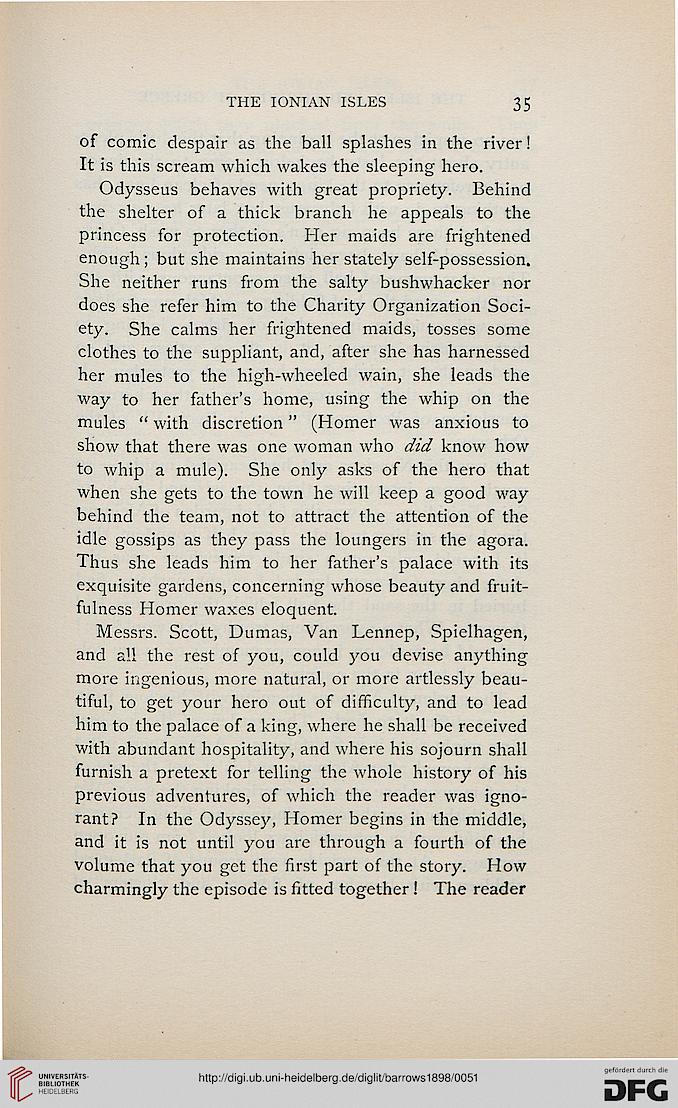 of comic despair as the ball splashes in the river!
It is this scream which wakes the sleeping hero.

Odysseus behaves with great propriety. Behind
the shelter of a thick branch he appeals to the
princess for protection. Her maids are frightened
enough; but she maintains her stately self-possession.
She neither runs from the salty bushwhacker nor
does she refer him to the Charity Organization Soci-
ety. She calms her frightened maids, tosses some
clothes to the suppliant, and, after she has harnessed
her mules to the high-wheeled wain, she leads the
way to her father's home, using the whip on the
mules " with discretion" (Homer was anxious to
show that there was one woman who did know how
to whip a mule). She only asks of the hero that
when she gets to the town he will keep a good way
behind the team, not to attract the attention of the
idle gossips as they pass the loungers in the agora.
Thus she leads him to her father's palace with its
exquisite gardens, concerning whose beauty and fruit-
fulness Homer waxes eloquent.

Messrs. Scott, Dumas, Van Lennep, Spielhagen,
and all the rest of you, could you devise anything
more ingenious, more natural, or more artlessly beau-
tiful, to get your hero out of difficulty, and to lead
him to the palace of a king, where he shall be received
with abundant hospitality, and where his sojourn shall
furnish a pretext for telling the whole history of his
previous adventures, of which the reader was igno-
rant? In the Odyssey, Homer begins in the middle,
and it is not until you are through a fourth of the
volume that you get the first part of the story. How
charmingly the episode is fitted together ! The reader