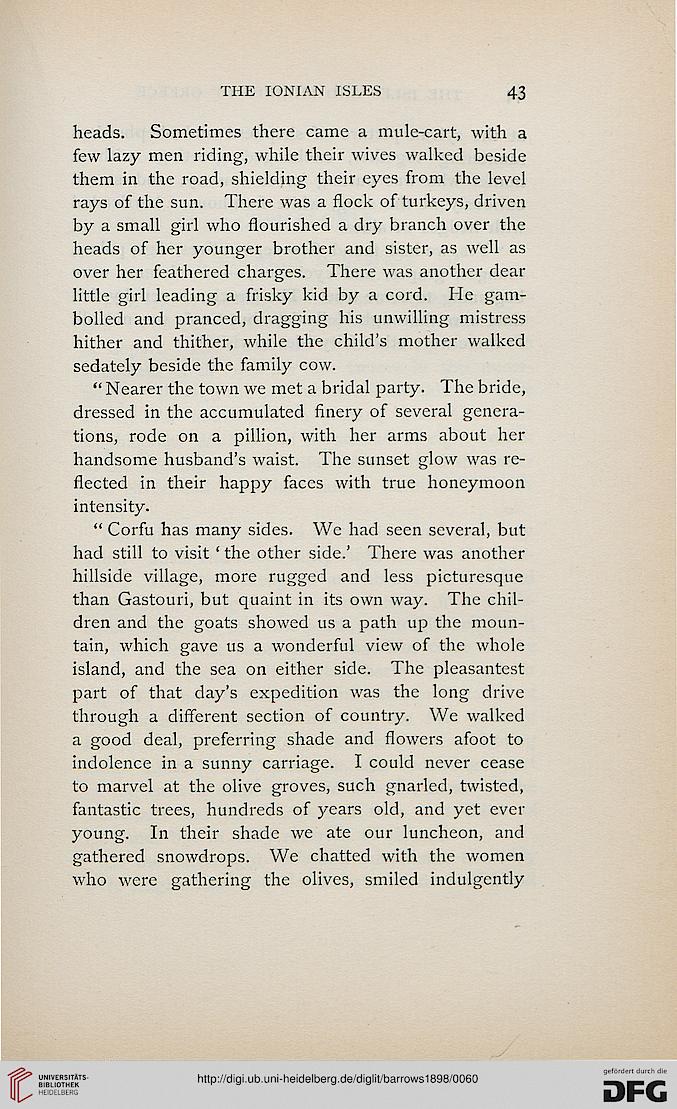 heads. Sometimes there came a mule-cart, with a
few lazy men riding, while their wives walked beside
them in the road, shielding their eyes from the level
rays of the sun. There was a flock of turkeys, driven
by a small girl who flourished a dry branch over the
heads of her younger brother and sister, as well as
over her feathered charges. There was another dear
little girl leading a frisky kid by a cord. He gam-
bolled and pranced, dragging his unwilling mistress
hither and thither, while the child's mother walked
sedately beside the family cow.

" Nearer the town we met a bridal party. The bride,
dressed in the accumulated finery of several genera-
tions, rode on a pillion, with her arms about her
handsome husband's waist. The sunset glow was re-
flected in their happy faces with true honeymoon
intensity.

" Corfu has many sides. Wc had seen several, but
had still to visit ' the other side.' There was another
hillside village, more rugged and less picturesque
than Gastouri, but quaint in its own way. The chil-
dren and the goats showed us a path up the moun-
tain, which gave us a wonderful view of the whole
island, and the sea on either side. The pleasantest
part of that day's expedition was the long drive
through a different section of country. We walked
a good deal, preferring shade and flowers afoot to
indolence in a sunny carriage. I could never cease
to marvel at the olive groves, such gnarled, twisted,
fantastic trees, hundreds of years old, and yet ever
young. In their shade we ate our luncheon, and
gathered snowdrops. We chatted with the women
who were gathering the olives, smiled indulgently