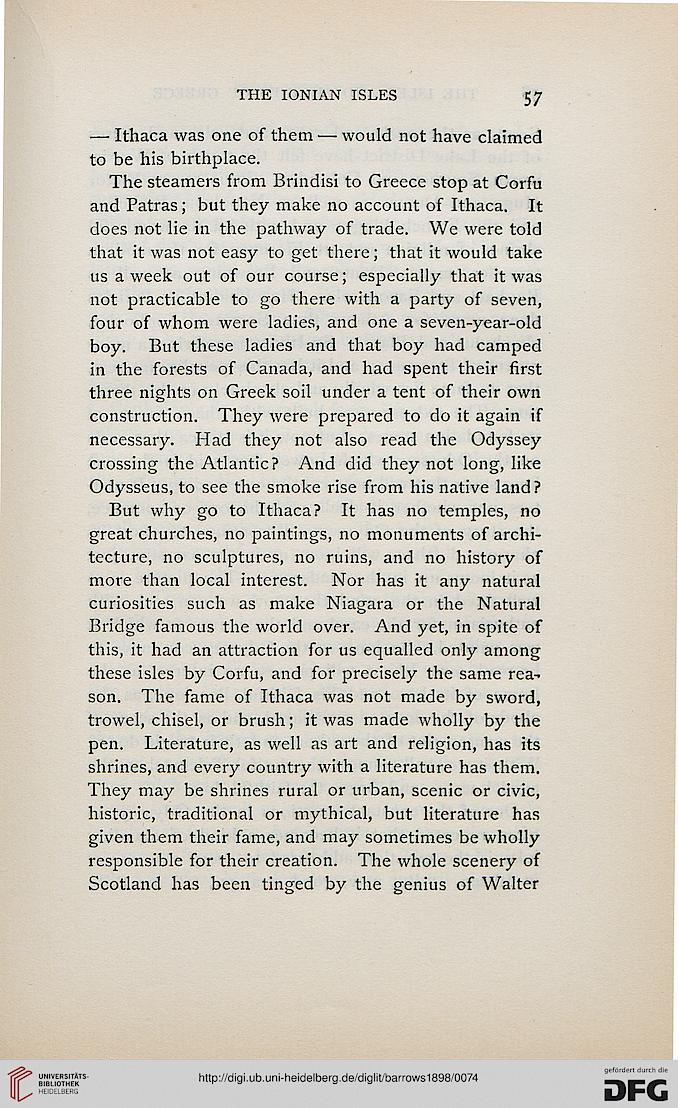 — Ithaca was one of them — would not have claimed
to be his birthplace.

The steamers from Brindisi to Greece stop at Corfu
and Patras ; but they make no account of Ithaca. It
does not lie in the pathway of trade. We were told
that it was not easy to get there; that it would take
us a week out of our course; especially that it was
not practicable to go there with a party of seven,
four of whom were ladies, and one a seven-year-old
boy. But these ladies and that boy had camped
in the forests of Canada, and had spent their first
three nights on Greek soil under a tent of their own
construction. They were prepared to do it again if
necessary. Had they not also read the Odyssey
crossing the Atlantic? And did they not long, like
Odysseus, to see the smoke rise from his native land?

But why go to Ithaca? It has no temples, no
great churches, no paintings, no monuments of archi-
tecture, no sculptures, no ruins, and no history of
more than local interest. Nor has it any natural
curiosities such as make Niagara or the Natural
Bridge famous the world over. And yet, in spite of
this, it had an attraction for us equalled only among
these isles by Corfu, and for precisely the same rea-.
son. The fame of Ithaca was not made by sword,
trowel, chisel, or brush; it was made wholly by the
pen. Literature, as well as art and religion, has its
shrines, and every country with a literature has them.
They may be shrines rural or urban, scenic or civic,
historic, traditional or mythical, but literature has
given them their fame, and may sometimes be wholly
responsible for their creation. The whole scenery of
Scotland has been tinged by the genius of Walter