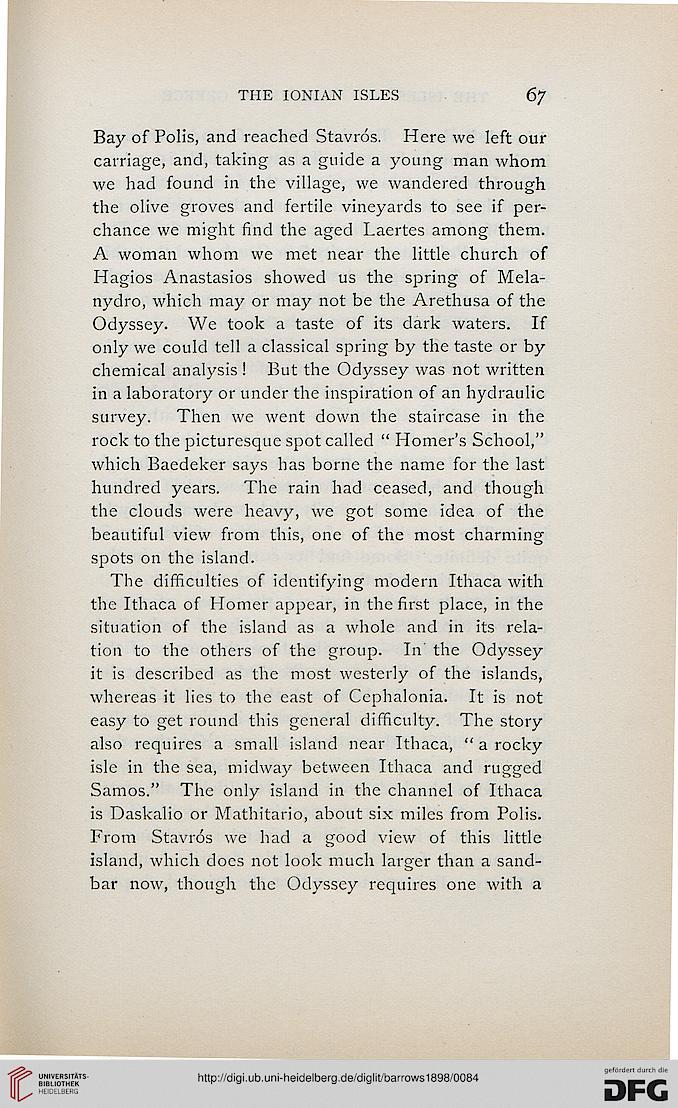 Bay of Poll's, and reached Stavros. Here we left our
carriage, and, taking as a guide a young man whom
we had found in the village, we wandered through
the olive groves and fertile vineyards to see if per-
chance we might find the aged Laertes among them.
A woman whom we met near the little church of
Hagios Anastasios showed us the spring of Mela-
nydro, which may or may not be the Arethusa of the
Odyssey. We took a taste of its dark waters. If
only we could tell a classical spring by the taste or by
chemical analysis ! But the Odyssey was not written
in a laboratory or under the inspiration of an hydraulic
survey. Then we went down the staircase in the
rock to the picturesque spot called " Homer's School,"
which Baedeker says has borne the name for the last
hundred years. The rain had ceased, and though
the clouds were heavy, we got some idea of the
beautiful view from this, one of the most charming
spots on the island.

The difficulties of identifying modern Ithaca with
the Ithaca of Homer appear, in the first place, in the
situation of the island as a whole and in its rela-
tion to the others of the group. In the Odyssey
it is described as the most westerly of the islands,
whereas it lies to the cast of Cephalonia. It is not
easy to get round this general difficulty. The story
also requires a small island near Ithaca, " a rocky
isle in the sea, midway between Ithaca and rugged
Samos." The only island in the channel of Ithaca
is Daskalio or Mathitario, about six miles from Polis.
From Stavros we had a good view of this little
island, which docs not look much larger than a sand-
bar now, though the Odyssey requires one with a