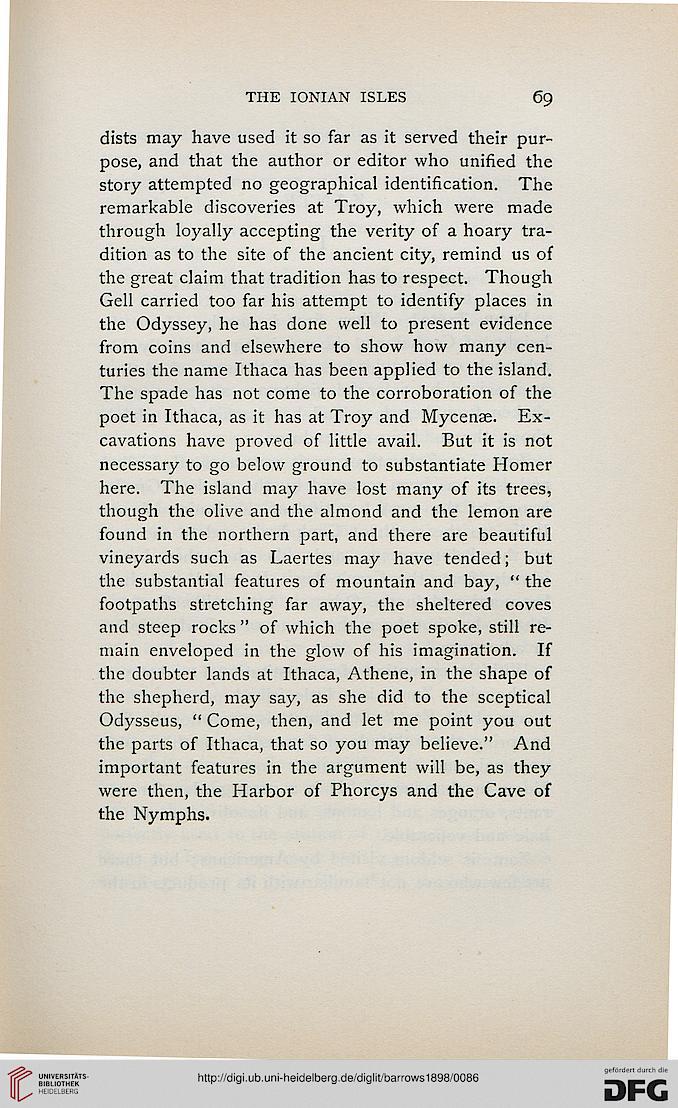 dists may have used it so far as it served their pur-
pose, and that the author or editor who unified the
story attempted no geographical identification. The
remarkable discoveries at Troy, which were made
through loyally accepting the verity of a hoary tra-
dition as to the site of the ancient city, remind us of
the great claim that tradition has to respect. Though
Gell carried too far his attempt to identify places in
the Odyssey, he has done well to present evidence
from coins and elsewhere to show how many cen-
turies the name Ithaca has been applied to the island.
The spade has not come to the corroboration of the
poet in Ithaca, as it has at Troy and Mycenae. Ex-
cavations have proved of little avail. But it is not
necessary to go below ground to substantiate Homer
here. The island may have lost many of its trees,
though the olive and the almond and the lemon are
found in the northern part, and there are beautiful
vineyards such as Laertes may have tended; but
the substantial features of mountain and bay, " the
footpaths stretching far away, the sheltered coves
and steep rocks " of which the poet spoke, still re-
main enveloped in the glow of his imagination. If
the doubter lands at Ithaca, Athene, in the shape of
the shepherd, may say, as she did to the sceptical
Odysseus, " Come, then, and let me point you out
the parts of Ithaca, that so you may believe." And
important features in the argument will be, as they
were then, the Harbor of Phorcys and the Cave of
the Nymphs.