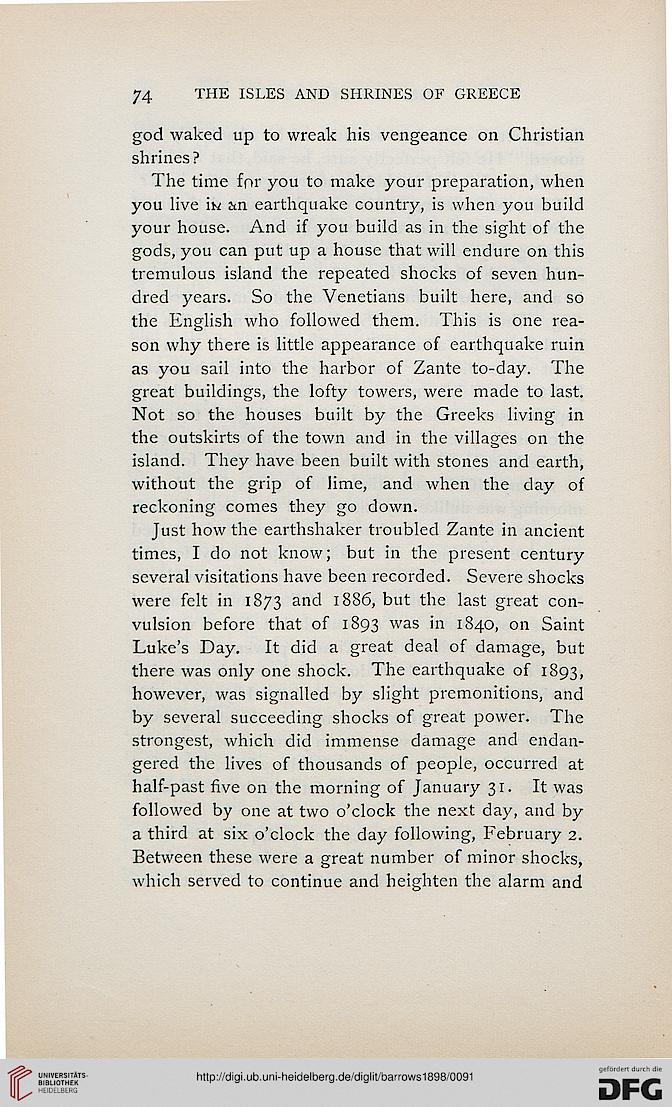 Information about OCR text
74 THE ISLES AND SHRINES OF GREECE

god waked up to wreak his vengeance on Christian
shrines?

The time for you to make your preparation, when
you live iu &n earthquake country, is when you build
your house. And if you build as in the sight of the
gods, you can put up a house that will endure on this
tremulous island the repeated shocks of seven hun-
dred years. So the Venetians built here, and so
the English who followed them. This is one rea-
son why there is little appearance of earthquake ruin
as you sail into the harbor of Zante to-day. The
great buildings, the lofty towers, were made to last.
Not so the houses built by the Greeks living in
the outskirts of the town and in the villages on the
island. They have been built with stones and earth,
without the grip of lime, and when the day of
reckoning comes they go down.

Just how the earthshaker troubled Zante in ancient
times, I do not know; but in the present century
several visitations have been recorded. Severe shocks
were felt in 1873 and 1886, but the last great con-
vulsion before that of 1893 was in 1840, on Saint
Luke's Day. It did a great deal of damage, but
there was only one shock. The earthquake of 1893,
however, was signalled by slight premonitions, and
by several succeeding shocks of great power. The
strongest, which did immense damage and endan-
gered the lives of thousands of people, occurred at
half-past five on the morning of January 31. It was
followed by one at two o'clock the next day, and by
a third at six o'clock the day following, February 2.
Between these were a great number of minor shocks,
which served to continue and heighten the alarm and