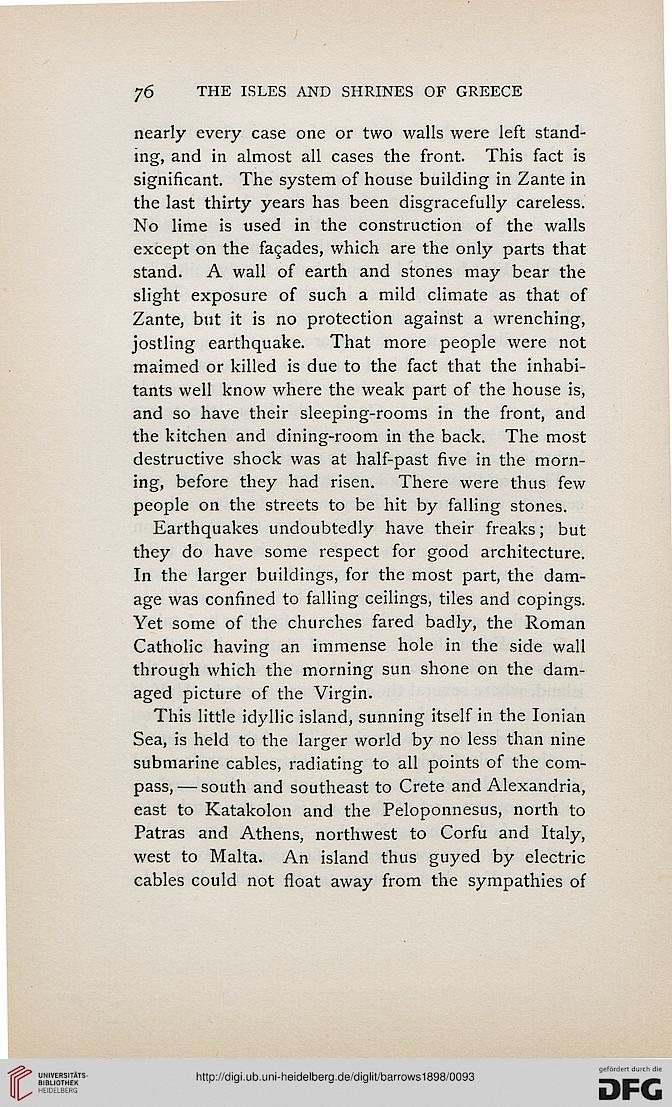 Information about OCR text
j6 THE ISLES AND SHRINES OF GREECE

nearly every case one or two walls were left stand-
ing, and in almost all cases the front. This fact is
significant. The system of house building in Zante in
the last thirty years has been disgracefully careless.
No lime is used in the construction of the walls
except on the facades, which are the only parts that
stand. A wall of earth and stones may bear the
slight exposure of such a mild climate as that of
Zante, but it is no protection against a wrenching,
jostling earthquake. That more people were not
maimed or killed is due to the fact that the inhabi-
tants well know where the weak part of the house is,
and so have their sleeping-rooms in the front, and
the kitchen and dining-room in the back. The most
destructive shock was at half-past five in the morn-
ing, before they had risen. There were thus few
people on the streets to be hit by falling stones.

Earthquakes undoubtedly have their freaks; but
they do have some respect for good architecture.
In the larger buildings, for the most part, the dam-
age was confined to falling ceilings, tiles and copings.
Yet some of the churches fared badly, the Roman
Catholic having an immense hole in the side wall
through which the morning sun shone on the dam-
aged picture of the Virgin.

This little idyllic island, sunning itself in the Ionian
Sea, is held to the larger world by no less than nine
submarine cables, radiating to all points of the com-
pass, — south and southeast to Crete and Alexandria,
east to Katakolon and the Peloponnesus, north to
Patras and Athens, northwest to Corfu and Italy,
west to Malta. An island thus guyed by electric
cables could not float away from the sympathies of