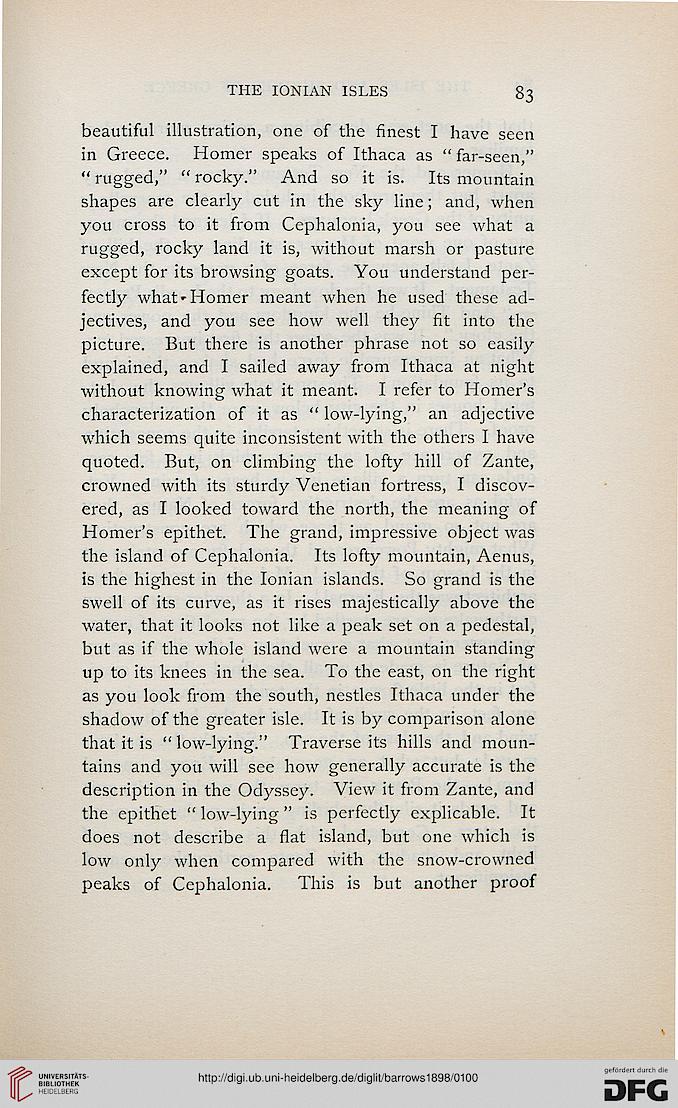 beautiful illustration, one of the finest I have seen
in Greece. Homer speaks of Ithaca as " far-seen,"
" rugged," " rocky." And so it is. Its mountain
shapes are clearly cut in the sky line; and, when
you cross to it from Cephalonia, you see what a
rugged, rocky land it is, without marsh or pasture
except for its browsing goats. You understand per-
fectly what'Homer meant when he used these ad-
jectives, and you see how well they fit into the
picture. But there is another phrase not so easily
explained, and I sailed away from Ithaca at night
without knowing what it meant. I refer to Homer's
characterization of it as " low-lying," an adjective
which seems quite inconsistent with the others I have
quoted. But, on climbing the lofty hill of Zante,
crowned with its sturdy Venetian fortress, I discov-
ered, as I looked toward the north, the meaning of
Homer's epithet. The grand, impressive object was
the island of Cephalonia. Its lofty mountain, Aenus,
is the highest in the Ionian islands. So grand is the
swell of its curve, as it rises majestically above the
water, that it looks not like a peak set on a pedestal,
but as if the whole island were a mountain standing
up to its knees in the sea. To the east, on the right
as you look from the south, nestles Ithaca under the
shadow of the greater isle. It is by comparison alone
that it is "low-lying." Traverse its hills and moun-
tains and you will see how generally accurate is the
description in the Odyssey. View it from Zante, and
the epithet " low-lying " is perfectly explicable. It
does not describe a flat island, but one which is
low only when compared with the snow-crowned
peaks of Cephalonia. This is but another proof