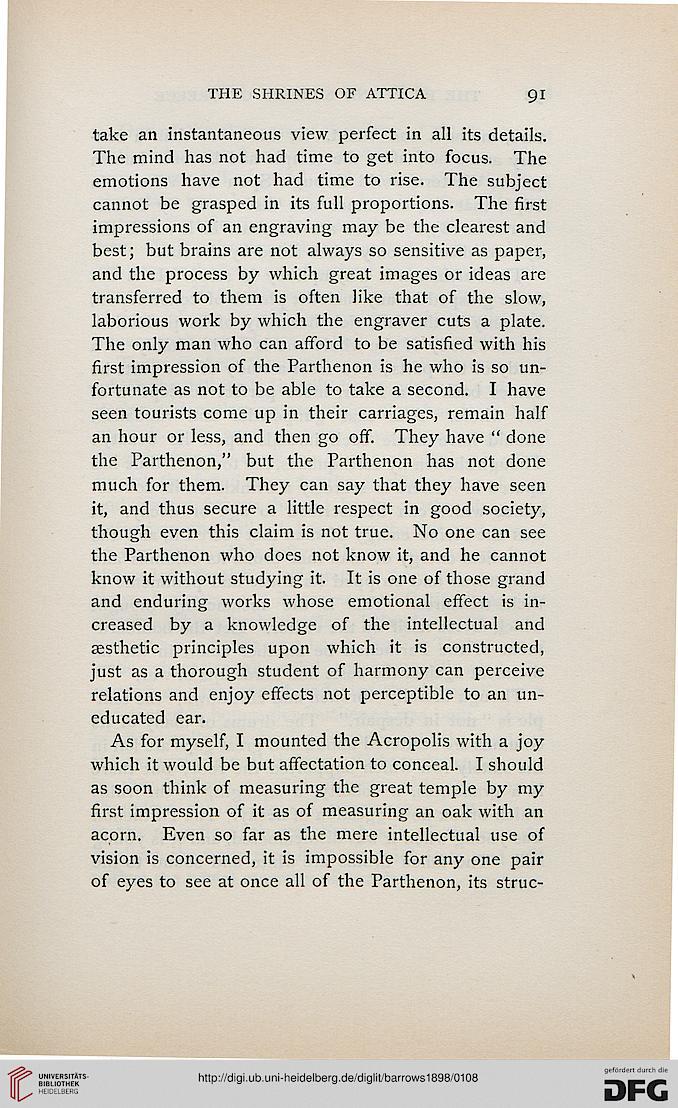 Information about OCR text
THE SHRINES OF ATTICA 91

take an instantaneous view perfect in all its details.
The mind has not had time to get into focus. The
emotions have not had time to rise. The subject
cannot be grasped in its full proportions. The first
impressions of an engraving may be the clearest and
best; but brains are not always so sensitive as paper,
and the process by which great images or ideas are
transferred to them is often like that of the slow,
laborious work by which the engraver cuts a plate.
The only man who can afford to be satisfied with his
first impression of the Parthenon is he who is so un-
fortunate as not to be able to take a second. I have
seen tourists come up in their carriages, remain half
an hour or less, and then go off. They have " done
the Parthenon," but the Parthenon has not done
much for them. They can say that they have seen
it, and thus secure a little respect in good society,
though even this claim is not true. No one can see
the Parthenon who does not know it, and he cannot
know it without studying it. It is one of those grand
and enduring works whose emotional effect is in-
creased by a knowledge of the intellectual and
aesthetic principles upon which it is constructed,
just as a thorough student of harmony can perceive
relations and enjoy effects not perceptible to an un-
educated ear.

As for myself, I mounted the Acropolis with a joy
which it would be but affectation to conceal. I should
as soon think of measuring the great temple by my
first impression of it as of measuring an oak with an
acorn. Even so far as the mere intellectual use of
vision is concerned, it is impossible for any one pair
of eyes to see at once all of the Parthenon, its struc-