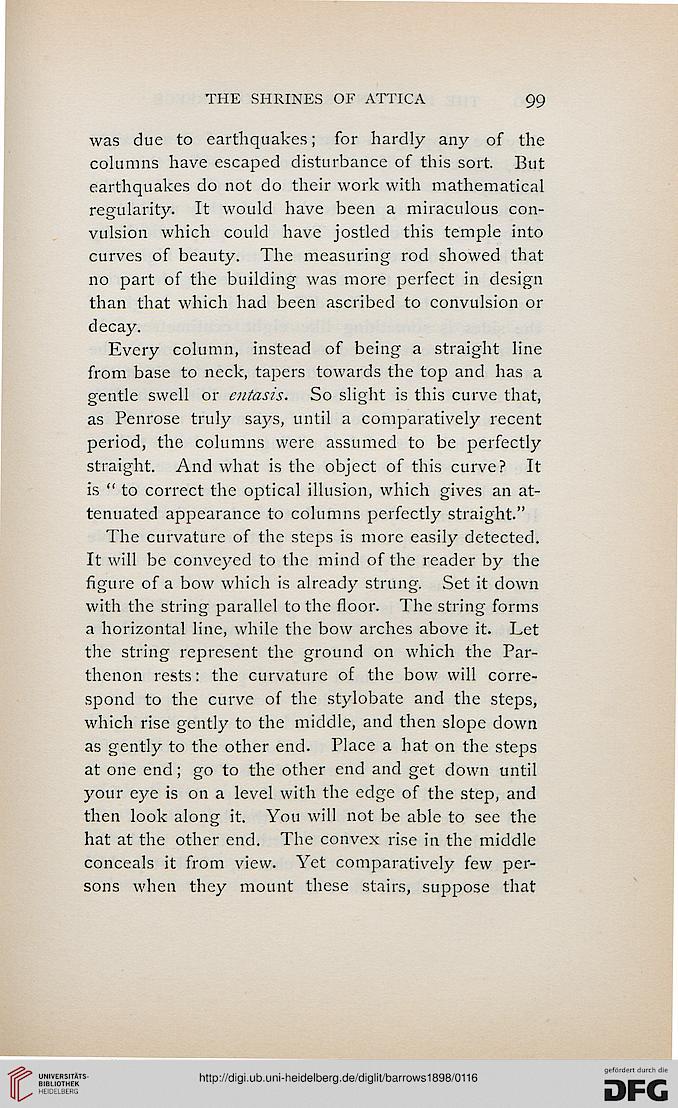 Information about OCR text
THE SHRINES OF ATTICA 99

was due to earthquakes; for hardly any of the
columns have escaped disturbance of this sort. But
earthquakes do not do their work with mathematical
regularity. It would have been a miraculous con-
vulsion which could have jostled this temple into
curves of beauty. The measuring rod showed that
no part of the building was more perfect in design
than that which had been ascribed to convulsion or
decay.

Every column, instead of being a straight line
from base to neck, tapers towards the top and has a
gentle swell or entasis. So slight is this curve that,
as Penrose truly says, until a comparatively recent
period, the columns were assumed to be perfectly
straight. And what is the object of this curve? It
is " to correct the optical illusion, which gives an at-
tenuated appearance to columns perfectly straight."

The curvature of the steps is more easily detected.
It will be conveyed to the mind of the reader by the
figure of a bow which is already strung. Set it down
with the string parallel to the floor. The string forms
a horizontal line, while the bow arches above it. Let
the string represent the ground on which the Par-
thenon rests: the curvature of the bow will corre-
spond to the curve of the stylobate and the steps,
which rise gently to the middle, and then slope down
as gently to the other end. Place a hat on the steps
at one end; go to the other end and get down until
your eye is on a level with the edge of the step, and
then look along it. You will not be able to see the
hat at the other end. The convex rise in the middle
conceals it from view. Yet comparatively few per-
sons when they mount these stairs, suppose that