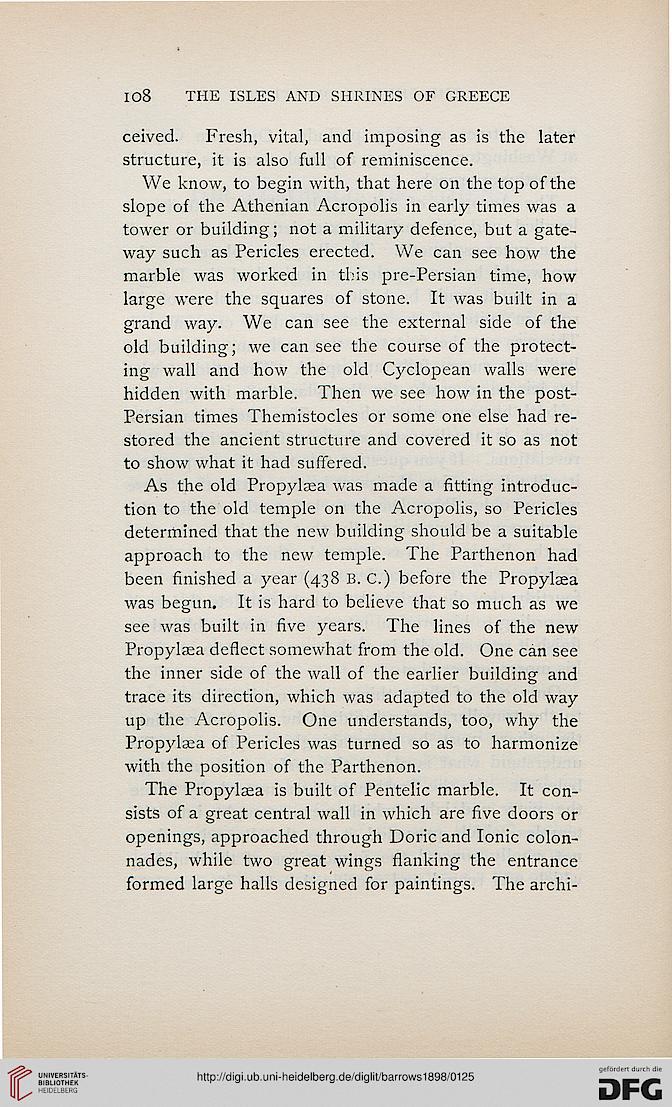 Information about OCR text
108 THE ISLES AND SHRINES OF GREECE

ceived. Fresh, vital, and imposing as is the later
structure, it is also full of reminiscence.

We know, to begin with, that here on the top of the
slope of the Athenian Acropolis in early times was a
tower or building; not a military defence, but a gate-
way such as Pericles erected. We can see how the
marble was worked in this pre-Persian time, how
large were the squares of stone. It was built in a
grand way. We can see the external side of the
old building; we can sec the course of the protect-
ing wall and how the old Cyclopean walls were
hidden with marble. Then we see how in the post-
Persian times Themistocles or some one else had re-
stored the ancient structure and covered it so as not
to show what it had suffered.

As the old Propylasa was made a fitting introduc-
tion to the old temple on the Acropolis, so Pericles
determined that the new building should be a suitable
approach to the new temple. The Parthenon had
been finished a year (438 B. C.) before the Propylaea
was begun. It is hard to believe that so much as we
see was built in five years. The lines of the new
Propylaea deflect somewhat from the old. One can see
the inner side of the wall of the earlier building and
trace its direction, which was adapted to the old way
up the Acropolis. One understands, too, why the
Propylaea of Pericles was turned so as to harmonize
with the position of the Parthenon.

The Propylaea is built of Pentelic marble. It con-
sists of a great central wall in which are five doors or
openings, approached through Doric and Ionic colon-
nades, while two great wings flanking the entrance
formed large halls designed for paintings. The archi-