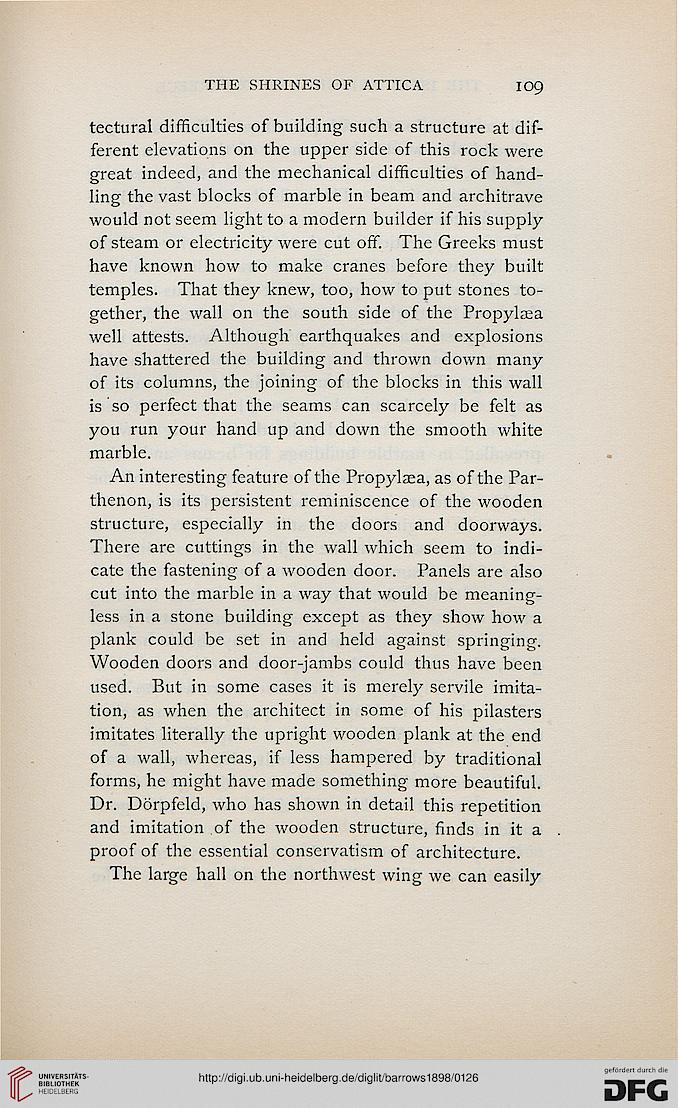 Information about OCR text
THE SHRINES OF ATTICA IO9

tectural difficulties of building such a structure at dif-
ferent elevations on the upper side of this rock were
great indeed, and the mechanical difficulties of hand-
ling the vast blocks of marble in beam and architrave
would not seem light to a modern builder if his supply
of steam or electricity were cut off. The Greeks must
have known how to make cranes before they built
temples. That they knew, too, how to put stones to-
gether, the wall on the south side of the Propylaea
well attests. Although earthquakes and explosions
have shattered the building and thrown down many
of its columns, the joining of the blocks in this wall
is so perfect that the seams can scarcely be felt as
you run your hand up and down the smooth white
marble.

An interesting feature of the Propylaea, as of the Par-
thenon, is its persistent reminiscence of the wooden
structure, especially in the doors and doorways.
There are cuttings in the wall which seem to indi-
cate the fastening of a wooden door. Panels are also
cut into the marble in a way that would be meaning-
less in a stone building except as they show how a
plank could be set in and held against springing.
Wooden doors and door-jambs could thus have been
used. But in some cases it is merely servile imita-
tion, as when the architect in some of his pilasters
imitates literally the upright wooden plank at the end
of a wall, whereas, if less hampered by traditional
forms, he might have made something more beautiful.
Dr. Dorpfeld, who has shown in detail this repetition
and imitation of the wooden structure, finds in it a
proof of the essential conservatism of architecture.

The large hall on the northwest wing we can easily