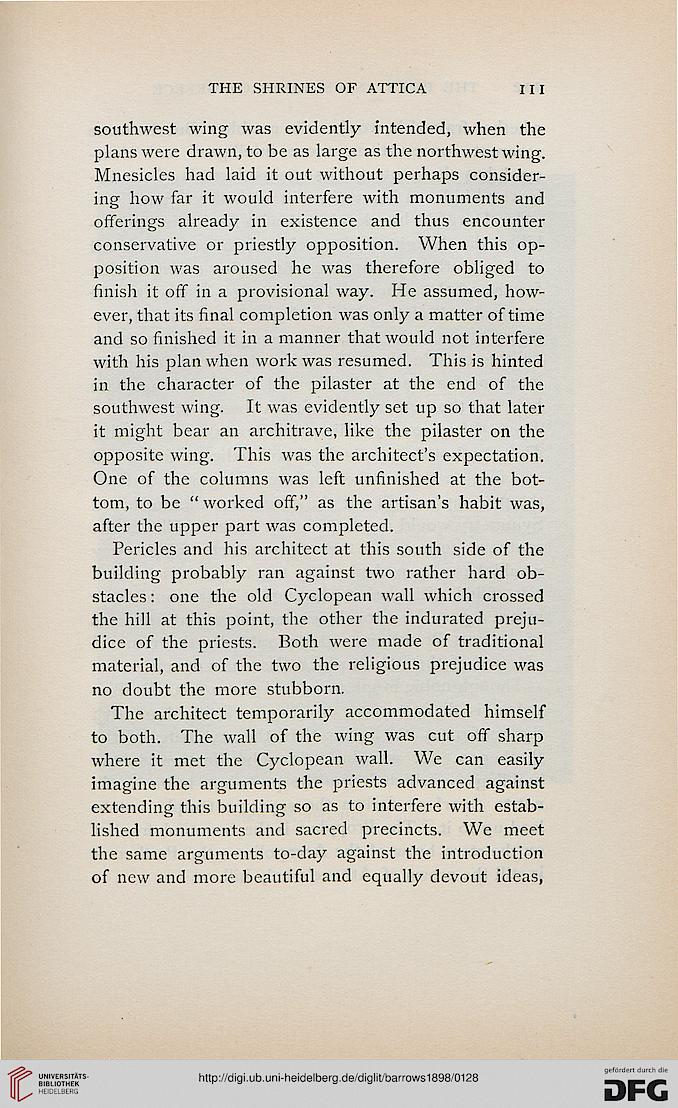 Information about OCR text
THE SHRINES OF ATTICA III

southwest wing was evidently intended, when the
plans were drawn, to be as large as the northwest wing.
Mnesicles had laid it out without perhaps consider-
ing how far it would interfere with monuments and
offerings already in existence and thus encounter
conservative or priestly opposition. When this op-
position was aroused he was therefore obliged to
finish it off in a provisional way. He assumed, how-
ever, that its final completion was only a matter of time
and so finished it in a manner that would not interfere
with his plan when work was resumed. This is hinted
in the character of the pilaster at the end of the
southwest wing. It was evidently set up so that later
it might bear an architrave, like the pilaster on the
opposite wing. This was the architect's expectation.
One of the columns was left unfinished at the bot-
tom, to be " worked off," as the artisan's habit was,
after the upper part was completed.

Pericles and his architect at this south side of the
building probably ran against two rather hard ob-
stacles : one the old Cyclopean wall which crossed
the hill at this point, the other the indurated preju-
dice of the priests. Both were made of traditional
material, and of the two the religious prejudice was
no doubt the more stubborn.

The architect temporarily accommodated himself
to both. The wall of the wing was cut off sharp
where it met the Cyclopean wall. We can easily
imagine the arguments the priests advanced against
extending this building so as to interfere with estab-
lished monuments and sacred precincts. We meet
the same arguments to-day against the introduction
of new and more beautiful and equally devout ideas,