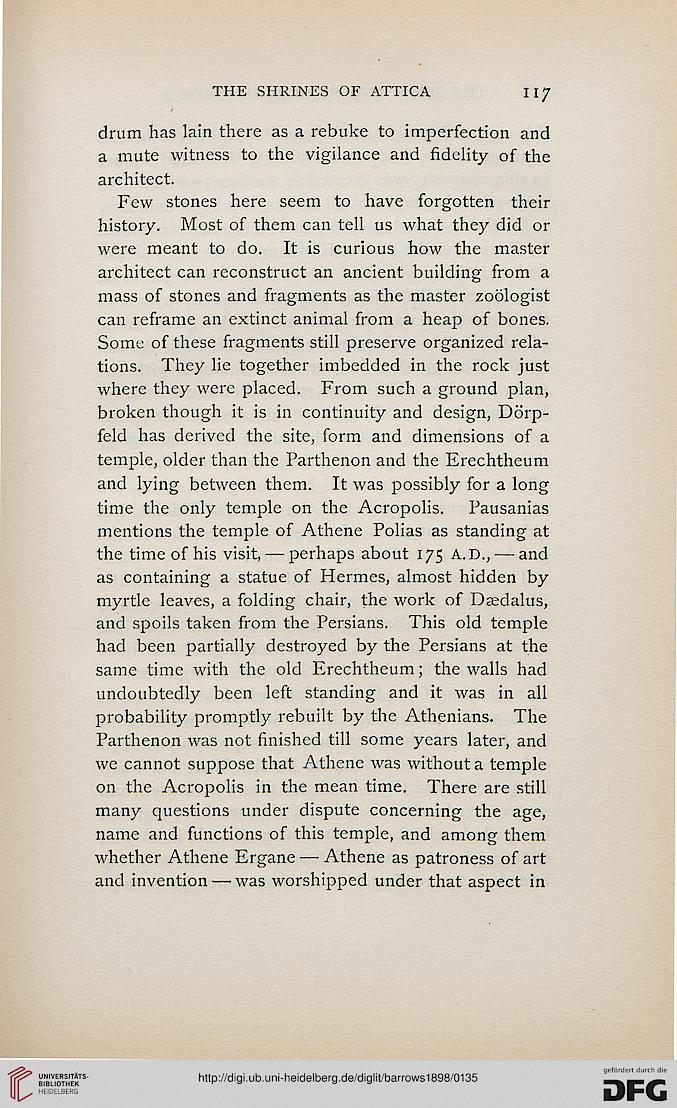 Information about OCR text
THE SHRINES OF ATTICA 117

drum has lain there as a rebuke to imperfection and
a mute witness to the vigilance and fidelity of the
architect.

Few stones here seem to have forgotten their
history. Most of them can tell us what they did or
were meant to do. It is curious how the master
architect can reconstruct an ancient building from a
mass of stones and fragments as the master zoologist
can reframe an extinct animal from a heap of bones.
Some of these fragments still preserve organized rela-
tions. They lie together imbedded in the rock just
where they were placed. From such a ground plan,
broken though it is in continuity and design, Dorp-
feld has derived the site, form and dimensions of a
temple, older than the Parthenon and the Erechtheum
and lying between them. It was possibly for a long
time the only temple on the Acropolis. Pausanias
mentions the temple of Athene Polias as standing at
the time of his visit, — perhaps about 175 A.D., — and
as containing a statue of Hermes, almost hidden by
myrtle leaves, a folding chair, the work of Dsedalus,
and spoils taken from the Persians. This old temple
had been partially destroyed by the Persians at the
same time with the old Erechtheum; the walls had
undoubtedly been left standing and it was in all
probability promptly rebuilt by the Athenians. The
Parthenon was not finished till some years later, and
we cannot suppose that Athene was without a temple
on the Acropolis in the mean time. There are still
many questions under dispute concerning the age,
name and functions of this temple, and among them
whether Athene Ergane — Athene as patroness of art
and invention — was worshipped under that aspect in