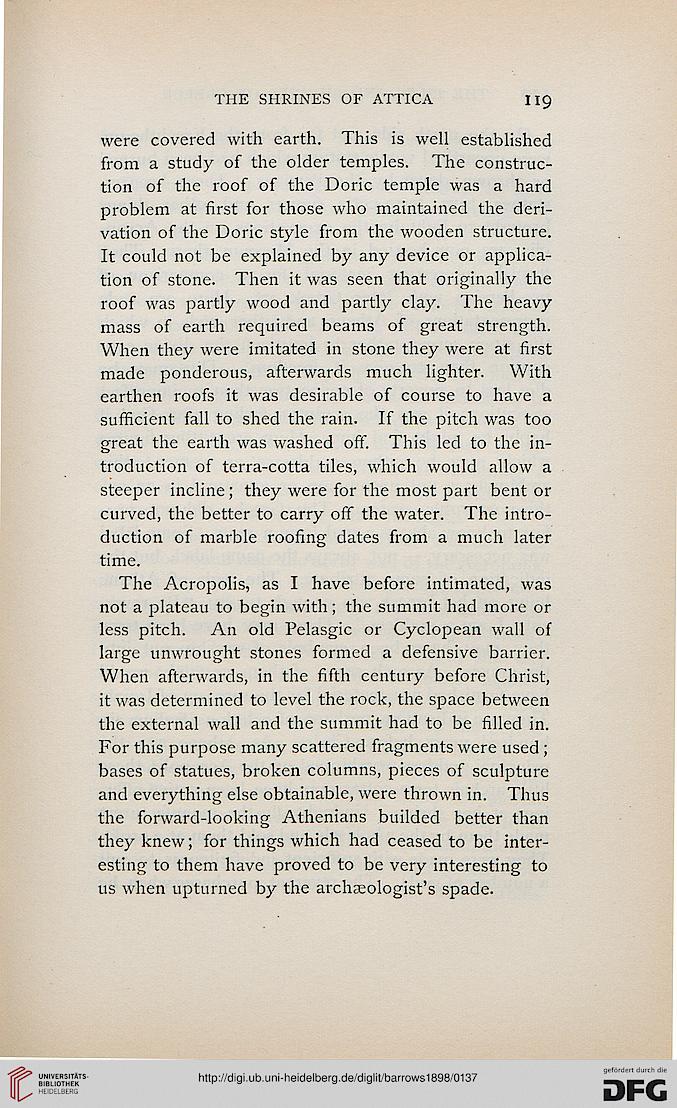 Information about OCR text
THE SHRINES OF ATTICA 119

were covered with earth. This is well established
from a study of the older temples. The construc-
tion of the roof of the Doric temple was a hard
problem at first for those who maintained the deri-
vation of the Doric style from the wooden structure.
It could not be explained by any device or applica-
tion of stone. Then it was seen that originally the
roof was partly wood and partly clay. The heavy
mass of earth required beams of great strength.
When they were imitated in stone they were at first
made ponderous, afterwards much lighter. With
earthen roofs it was desirable of course to have a
sufficient fall to shed the rain. If the pitch was too
great the earth was washed off. This led to the in-
troduction of terra-cotta tiles, which would allow a
steeper incline; they were for the most part bent or
curved, the better to carry off the water. The intro-
duction of marble roofing dates from a much later
time.

The Acropolis, as I have before intimated, was
not a plateau to begin with; the summit had more or
less pitch. An old Pclasgic or Cyclopean wall of
large unwrought stones formed a defensive barrier.
When afterwards, in the fifth century before Christ,
it was determined to level the rock, the space between
the external wall and the summit had to be filled in.
For this purpose many scattered fragments were used ;
bases of statues, broken columns, pieces of sculpture
and everything else obtainable, were thrown in. Thus
the forward-looking Athenians buildcd better than
they knew; for things which had ceased to be inter-
esting to them have proved to be very interesting to
us when upturned by the archaeologist's spade.