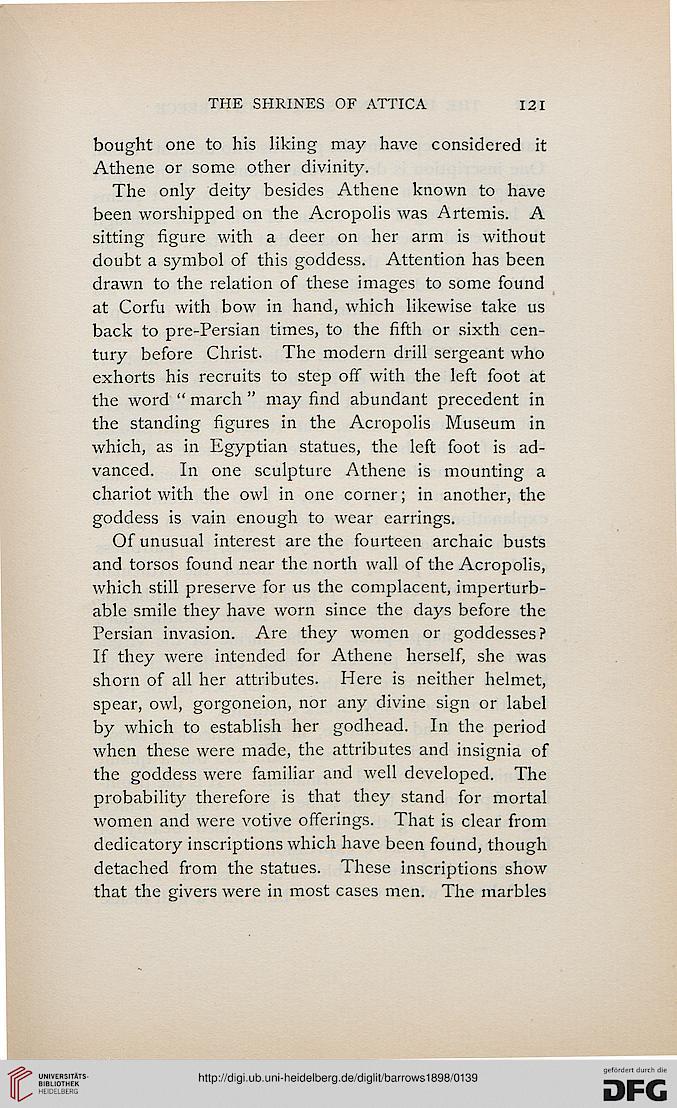 Information about OCR text
THE SHRINES OF ATTICA 121

bought one to his liking may have considered it
Athene or some other divinity.

The only deity besides Athene known to have
been worshipped on the Acropolis was Artemis. A
sitting figure with a deer on her arm is without
doubt a symbol of this goddess. Attention has been
drawn to the relation of these images to some found
at Corfu with bow in hand, which likewise take us
back to pre-Persian times, to the fifth or sixth cen-
tury before Christ. The modern drill sergeant who
exhorts his recruits to step off with the left foot at
the word " march " may find abundant precedent in
the standing figures in the Acropolis Museum in
which, as in Egyptian statues, the left foot is ad-
vanced. In one sculpture Athene is mounting a
chariot with the owl in one corner; in another, the
goddess is vain enough to wear earrings.

Of unusual interest are the fourteen archaic busts
and torsos found near the north wall of the Acropolis,
which still preserve for us the complacent, imperturb-
able smile they have worn since the days before the
Persian invasion. Are they women or goddesses?
If they were intended for Athene herself, she was
shorn of all her attributes. Here is neither helmet,
spear, owl, gorgoneion, nor any divine sign or label
by which to establish her godhead. In the period
when these were made, the attributes and insignia of
the goddess were familiar and well developed. The
probability therefore is that they stand for mortal
women and were votive offerings. That is clear from
dedicatory inscriptions which have been found, though
detached from the statues. These inscriptions show
that the givers were in most cases men. The marbles